Praying for My Soldier 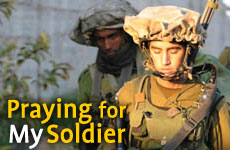 "My soldier" became like my brother, and I feared for his life.

Living in Jerusalem, rockets and kassams are news, not daily life. Thank God my family and I do not hear sirens, nor are we running to shelters. I feel like my regular life continues as normal. And yet, just a few miles away, hearts are filled with fear, and running to the grocery store is a scary experience. Children can't go to school and families get woken up in the middle of the night to rush to shelters.

Two weeks ago, I went to a beauty salon and the woman was thanking me profusely for the business. With tears streaming down her face, she said, "They called in my son last night. He had to travel down to Gaza first thing this morning, directly to the fighting. He can't bring his cell phone with him. My entire body is trembling. My baby, my baby!"

I sat down next to her, unsure what to say, just thinking of how many mothers and wives, brothers and sisters were worrying about their loved ones called up for reserves, fighting on the front lines.

And here I was, just "continuing regular life as normal." Tears started trickling down my face too.

How could I calmly go about life when my brothers and sisters stand at the brink of danger and death?

"So thank you for giving me something to do," she concluded, "so that I can try to distract myself."

We sat in silence for a few moments, as I tried to show my concern and share her pain.

I walked out of the salon, overwhelmed with a desire to do something. How could I calmly go about life when my brothers and sisters stand at the brink of danger and death?

But what could I do?

I arrived at work and checked my email. Like a message straight from God, there was an email about "Operation Tefillah (Prayer), Torah & Troops." It was an effort initiated by leading rabbis to encourage people around the world to be paired with an Israeli soldier. They take the responsibility to say prayers, learn Torah, and do acts of kindness on behalf of that soldier.

Could I have gotten an answer to my thoughts any faster? I quickly emailed back to the address and requested the name of an Israeli soldier. From that day I added many prayers and Psalms in the merit of the safety of "my soldier." My husband dedicated his Torah study in the merit of "our soldier." I tried to do as many extra acts of kindness as possible, and always thought of "my soldier" when I did them. He became more and more a part of me every day. I thought of him every time I read the news and wondered where he was every time I heard about a rocket falling or an army operation in Gaza. In such a short time "my soldier" became like my brother: in my mind, in my thoughts and in my prayers all the time.

In the back of my mind, there was a fear building up about the welfare of my brother, my soldier. I became petrified to check the news, lest I see his name. My friends laughed at me, but in my head, my soldier was my responsibility. The heartfelt prayers I offered in his merit were my contribution to our Jewish nation.

After two weeks of prayer, Torah study and acts of kindness, I sat down one morning at my computer and checked the news. I read an article about someone with the same first name as my soldier, who was mortally wounded in a mortar round and died on the way to the hospital. I know there are many young men with this name, but nonetheless my skin was shivering with goose bumps.

I had to figure out who this casualty was. I started calling and emailing newspapers asking them if they by any chance know the Hebrew name of this given soldier. No luck. I continued praying fervently.

The next day, I checked the news again, to read an article about the soldier that had died on the way to the hospital, this time, with his Hebrew name written. My heart sunk. My soldier. My brother. Maybe I could've prayed more. Maybe I could've prayed harder. I was overwhelmed with guilt. I had taken on this responsibility. Had I done a good job?

My heart sunk. My soldier. My brother. I had taken on this responsibility. Had I done a good job?

My soldier's death made the reality of the war come crashing down on me. Despite all the sincere prayers, I was still distant from genuinely connecting to the life and death risks our soldiers are facing.

I calmed myself down by reminding myself that God runs the world; He ultimately decides exactly when life starts and when life ends. And who knows if in the merit of my prayers, my soldier lived an extra hour, or was spared the torture of being kidnapped. I felt like I lost a brother and a friend, whom although I never met, had become a deep part of me.

Right then, as the tears streamed down my face, I realized that the most I could do now, in the merit of the exalted soul of my soldier, was to continue helping others in the most poignant way possible: to pray for the safety of our other soldiers, and other citizens in the South.

I quickly wrote an email to "Operation Tefillah, Torah & Troops" -- to ask for another name.

Jerusalem of White
It Takes A Lot Of Faith To Be An Atheist
How Instagram Brought Back This Nostalgic Soup
What Makes Eli Run?
Comments