No One to Blame 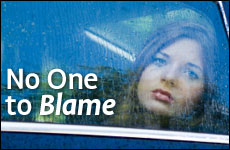 A taxi ride to somewhere unexpected.

Last week my mother trekked across the world to visit us; her children and grandchildren living in Israel. It wasn't her first visit, but this time I wanted to do things right.

Each time she came she would shrug off my suggestion of picking her up from the airport. "You don't have a car," she'd say. "It would be too expensive. You have all the little ones at home. You're too busy."

I was sorry for listening. What greater way to honor my mother than to show her that when it came to her, money and time were limitless.

I had it all planned out. An acquaintance who drove a car service would take me to the airport. I told my mother to call my house as soon as she arrived in the airport as I might be sending her a taxi driver from my neighborhood. It would be a great surprise.

I stood in the arrivals hall, clutching the sweaty palms of my three-year-old son and my six-year-old daughter. They were tired from the nauseating hour drive, but eager to see their grandmother emerge through the frosted airport doors. I tried not to think about how much money I was spending on the ride and how many work hours had been lost.

But something was wrong. Why hadn't my mother called the house yet? It was late already. She ought to have gotten to the luggage carousel by now. I called my husband on my cell phone.

"Maybe there was a delay," I said. I hung up and scanned the crowds wearily trudging down the marble foyer with their luggage carriages. My children stuck their hands into the small cascading waterfall and licked their fingers. I craned my neck and hoped. My cell phone rang. It was my husband.

"The phone in our house is off the hook," he said.

"She may have tried to get through," he said with infuriating equanimity. "I don't know."

"Call her cell phone," I managed to sputter. "See if she's arrived. Forget the surprise already."

My daughter looked at me. "What happened Mommy? What's wrong?"

The phone rang again. "Yael?" my husband said. "I spoke to Mom. She tried calling for half an hour but the phone was off the hook. She got out early because she traveled business class. She's already halfway to our house." He paused. "I know it's disappointing, but just turn around and come home."

I felt the tears pooling in my eyes, watching my children's eager faces inspecting the crowds.

"Why didn't you check to make sure the phone was on the hook?" I said. "You knew we were expecting an important call!"

"Come on Yael. Are you trying to find blame here?"

My husband paused, gathering his words. "Come on Yael," he said. "Are you trying to find blame here?"

Blame? I wasn't blaming my husband for anything, I was merely suggesting with hidden innuendo that anyone with a modicum of intelligence would have picked up the receiver to make sure the call could come through.

I tugged my children's hands, my stomach turning.

"Really?" they asked, their faces falling.

"Yes, I know it's upsetting," I said. "I'm upset too." We walked briskly back to the taxi and I realized that I had it all wrong. It wasn't my husband's fault at all. It was actually my mother's fault. If only she would have told me that she was flying business class then I would have known to come earlier. She only flew business class when she earned a free upgrade which was rarely. How was I supposed to guess?

And she should have known our cell phone numbers and carry them with her!

My insides churned as we got back into the van.

"Where's your mother?" the driver asked.

I snapped my daughter's seatbelt into place. "We missed her," I said. "Let's go home." I didn't want to talk about it.

"Oh my goodness," she said. "I'm so sorry. Maybe I should have suggested getting here earlier? I hope you're not upset with me."

What a fascinating proposition. Maybe all along it had really been the driver's fault! After all, she was supposed to have enough experience to gauge when the passengers should arrive.

But even I couldn't stoop that low. She hadn't known that my mother was flying business class.

The car bumped along the road, my children looking at me, their faces creased with worry. My phone rang.

"Are you okay?" my husband asked. "I'm sorry -- you must be so disappointed. You wanted to surprise her."

Hey wait a second. I had forgotten about myself. Maybe I was to blame? If I would have told her that I was coming then surely she would have waited for me. It was my poor lack of organization, trailing behind me wherever I went in life. That must be what my husband was trying to tell me. I was to blame.

I looked at my children. "I know how disappointing this is," I said.

They looked back at me, puzzled. And I realized that the only thing disappointing them was my reaction. When my children grew up, did I want them to lash out with blame at everyone around them when the natural disappointments of life cropped up?

What kind of an example was I setting?

But could I really stash my deep displeasure away in some unnoticed corner of my brain and wage war against the negative impulses coursing through me like a random electrical storm?

I looked out of the car window, past my children's sad faces and out into the fields on the sides of the highway dotted with haystacks, the smoke from the Tel Aviv factories curling up into the dusky sky beyond. Then I looked back to those little worried faces again and I felt my stomach unclench and the minty freshness of relief spread through me.

It wasn't my fault.

It wasn't my husband's fault.

It wasn't my mother's fault.

There was no one to blame.

I looked at my children and I smiled. "Soon we'll be home and we'll tell Savta all about the surprise we tried to make for her," I said. "She'll be so happy!"

"She won't believe it!" my three-year-old said.

"And we got a special car ride too," I added. The children beamed and we sang rhyming songs about flying to the moon the rest of the way home.

When we arrived home, the driver generously offered me a reduced rate and I eagerly grabbed the children's hands to go and greet our special visitor. I welcomed my mother warmly, in proper gratitude for the lengths she had traveled to see us. The children were ecstatic to see her and spirits were high all around. I shudder to think of how my previous mood could have destroyed a beautiful and cherished visit.

My husband pulled me aside. "Are you okay?" he asked me quietly.

But my little disappointment at the airport had shown me that sometimes I can be even better than okay.

My Year of Going Out of My Comfort Zone

Circus, Circus
Can You Show Me This "God?"
How to Become Immortal
Judaism and Mental Health
Comments
MOST POPULAR IN Family
Our privacy policy
Aish.com Is Looking for Great Writers