Beauty and the Beast: Serpents of Desire, Part 6 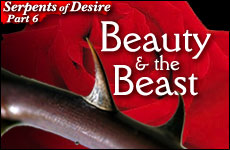 A key to the essential difference between snake and man, I would suggest, is revealed through a careful look at the snake's challenge to Eve.

We asked earlier about the strangeness of the snake's opening words to Eve: "Even if God said don't eat from any trees of the garden..." From there, the sentence trails off into nothingness, as if the snake was interrupted before it could finish the thought. But let's try and reconstruct the end of the sentence. The snake seems to be saying: "Even if God said don't eat, so what? Do it anyway!" OK, stop the tape -- let's look at this: Where, exactly, is the temptation here?

I'd like to share with you an approach developed by Rabbi Samson Raphael Hirsch, a giant of Biblical exegesis who lived a little over a century ago. Hirsch suggests that the key to the snake's words lies in something as simple as emphasis: It depends on which part of the sentence gets italicized, as it were. Above, we read it, "Even if God said don't eat, so what?" Hirsch asks: What if we read it differently, with the emphasis placed on the word "said"?

"Wasn't God the one who put those desires inside you?"

Read this way, the snake isn't really challenging the authority of God per se. His argument is much more narrow; he's just saying is that God's spoken words are not the things you should pay attention to. Hirsch elaborates the snake's point this way:

God may have said to avoid the tree, but the question is: Do you want to eat from the tree? Do you desire it?

And let's say you do desire the tree. Where do you think those desires came from? Who put them inside you?

Wasn't God the one who put them inside you?

All in all, the snake is pointing to a great and terrible contradiction: On the one hand, God's voice instructs you not to eat of the tree. But on the other hand, another voice of God -- His voice inside you; your passions, your desires -- beckons you to indeed eat of the tree.

I don't know about you, the snake says, but if I were in your shoes -- here's how I would see it:

"Even if God said don't eat of the trees, so what?"

In saying this, the snake is not necessarily being malicious or even devious. On the contrary, he can be seen as very innocent, very straightforward -- very naked. After all, he's just telling you what it's like to be a snake.

Consider this: How does God make His will known to a snake? How, for that matter, does God make His will known to any animal? The Almighty doesn't instruct animals intellectually. He doesn't speak to them in words. There is no Bible, no Torah, revealed atop a mountain, for snakes, birds and lizards. But just because a snake doesn't have a lawbook, doesn't mean there are no laws. To the contrary -- animals follow the Divine Will quite faithfully. The voice of God beats palpably inside of them. God speaks to animals through the passions, desires and instincts they find within themselves.

Every time a Grizzly Bear goes salmon hunting in an Alaskan river; every time worker bees chase the drones out of a hive -- every time an animal acts "naturally", obeying the voice of instinct or desire within itself -- the animal follows the will of its Creator.

And that, in a nutshell, is the essential temptation of the serpent. It is a temptation that cuts to the core of our very humanity. Remember how we asked before: Why is it that the snake could never be a fitting companion for Adam? How is mankind fundamentally different from the snake -- or for that matter, from any member of the animal world? Well, let's try and tackle that now.

Does our ness as humans lie in the fact that we can talk? Perhaps. But if we met a talking animal, would we grant it human rights? Lately, researchers have taught limited sign language to apes. Would these apes qualify as furry humans?

Maybe our advanced intelligence is what makes us human. But what if we met a really smart animal? As I understand it, the jury is still out on the intelligence of dolphins. If dolphins really are as bright as some claim, should they be entitled to the right to vote?

Well, then: If the key to our humanity doesn't lie in our capacity for speech, for walking on two legs, or for intelligent thinking -- all of which were shared by our friend, the primal serpent -- in what does our humanity lie?

I would argue that it lies in how you answer this one query: "How does God speak to you? Which is the primary voice of God?"

If God speaks to you primarily through passion and instinct -- if all you need to do is examine your desires to find out what God wants of you -- well, you are an animal. If God has expectations for you beyond acting on your instincts and passions; if God addresses Himself to your mind and asks you to rise above your desires or to channel them constructively -- well, then you are a human.

What the snake is really doing, then, is forcing Adam and Eve to confront what it means for them to be human beings and not beasts. In the end, the snake really is arom -- in all senses of the word. When he asks, "even if God said don't eat, so what?" -- he is being straightforward and honest; "naked", as it were. He was just telling it like it is: "Here's what it is like to be a snake". On the other hand, when we look at the snake's words from our point of view, from the perspective of Adam and Eve -- then, his argument looks cunning and deceptive, the other meaning of arom. What's right for the snake is not necessarily right for us. He may walk, he may talk, he may be smart -- but we are different than he; we hear a voice that is not relevant to him. When all is said and done, we are not snakes.

BEAUTY AND THE BEAST

The snake's challenge takes the form of a proposition to eat the Forbidden Fruit. If we look carefully, we'll find that this proposal follows naturally from the serpent's suggestion that the voice of desire is the primary way in which God speaks to us.

In the moments before deciding to take the fruit, Eve contemplates the choice before her. According to the text, here is what happened:

That, at least, is how most translations render the verses -- and indeed, it is how some commentators interpret them. But the Hebrew is a little more complicated. A more literal translation of the last phrase, venechmad ha'etz lehaskil, yields not that the tree was "desirable as a means to wisdom" but that:

To explain: A lollipop tastes "good to eat." Even a two-year-old can appreciate that. But it takes a ten year old to appreciate the beauty of a rose -- beauty that is "a delight to the eyes," not to the mouth. And what about things which are "desirable to contemplate"? This is beauty that appeals not to any of our physical senses, but to our mind. The poems of Emily Dickenson; the symphonies of Beethoven; an elegant debating performance -- all these are "desirable to contemplate". They appeal to the mind, yes -- but not because they are true, but because they are beautiful. Indeed, a poem may or may not express a truth, and a good debater can be impressive even if he's lying through his teeth. But that's irrelevant. The mind appreciates the beauty of such things -- and desires them accordingly.

The fruit of the tree was dripping with desire.

The tree appealed to us at all levels of the aesthetic -- from the most obvious to the most subtle and refined. The fruit of the tree was dripping with desire.

Desire and instinct are more trustworthy indicators of God's will than His words. Eat from the tree, bring desire ever deeper inside you -- and you shall truly be godly.

But what, you might ask, does all this have to do with "knowing good and evil"? Why would a battle over the proper role of desire in the human psyche be waged over a tree that contains, of all things, "knowledge of good and evil"?

Hang on. We'll explore that next.

Rabbi Fohrman invites comments or questions from readers. Please use the comment section below. Rabbi Fohrman is now teaching a fascinating series of classes via the internet, and you can join the excitement. Check it out at www.jewishtextstudy.org.

History's First Question: Where Are You? Serpents of Desire, Final Chapter

Friedrich Nietzsche and the Disc Jockey: Serpents of Desire, Part 10

The I of the Beholder: Serpents of Desire, Part 9

A Tale of Two Trees - Serpents of Desire, Part 2

Adam, Eve and the Elephant in the Room - Serpents of Desire, Part 1

Serpents of Desire: Good and Evil in the Garden of Eden. An Introduction
The Promise Of The Land
Which Chat Are You On?: Parshas Behar/Lag Ba’Omer
Do You Like Slow-Cooked Food? Thank the Jews
Comments
MOST POPULAR IN Exploring The Bible
Our privacy policy