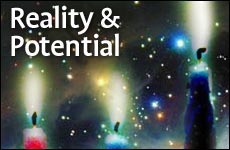 Shoot for the stars or be more realistic? Two perspectives reflected in the Chanukah light.

The Sages of the Talmud record a classic dispute concerning the Chanukah menorah:

Beit Shammai say: “The first day one lights eight candles and each ensuing day he decreases the amount (the second day seven, the third six, and so on).”

Beit Hillel, on the other hand say the exact opposite. “On the first day we light one candle and on each ensuing day we increase that amount (the second day two, the third three, and so on).”

Rabbi Eliyahu Dessler in Michtav M'Eliyahu uses this as a springboard for a deeper understanding of Chanukah. He begins with a parable: Imagine two friends. One of them goes to the store to buy a lottery ticket. The next day he finds that he has the winning ticket and in his great excitement tells his friend. We can imagine the joy of both of them, the friend who won the lottery as well as the one who did not.

Some time later, the winner buys another ticket. As luck would have it he wins again, and again he can't wait to tell his friend. The friend rejoices with him, but not quite as much. He might even feel a little resentment that his peer is winning so much money and he is not.

Once again the wealthy friend buys another ticket, and once again he wins! In utter amazement he runs over to his friend to tell him the good news. By now his friend is terribly jealous; it's becoming too much to bear. To the person who keeps on winning, though, each ticket only adds to his excitement and happiness.

Let's imagine this happening a fourth and fifth time, and so on. To the friend who's accumulating all this wealth, each winning ticket is an accumulation of joy from the previous win. On the other hand, his friend's happiness diminishes more and more.

Rabbi Dessler explains that this discrepancy also exists in how people experience the joy of Chanukah. Most people can experience the initial joy that comes along with lighting the menorah. By the second day, for many of us, the flush of the experience is not as intense. By the third day, it is even less so, and keeps on diminishing with each ensuing day.

But for others whose spiritual sensitivity is deep and internal, they experience the joy of the festival in an ever increasing fashion, with the last day being the climax.

To further expound the matter, Rabbi Dessler compares this to three levels of the soul, nefesh, ruach and neshama. Someone who experiences the festival on a nefesh level, the lowest level, performs actions by rote; he takes Chanukah for granted and is only capable of superficial actions.

One who is on the intermediate level, ruach, is like most of us -- we can experience the deeper, more sublime joy, but only for a short time. We get used to it and then have a tendency to take it for granted. It may have entered our heart for the moment, but it shortly disappears.

For the person whose experience of life is on the neshama level, the highest level, the joy of Chanukah leaves an indelible mark on his soul. His experience is so deep and impressionable that he can always tap into it and build upon it.

This is the difference between the person who actually won the lottery ticket and his friend. To the winner it was a personal experience that affected his neshama. Each triumph made a lasting impact that grew with every winning ticket. But to his friend whom it did not strike personally, the victory was more distant, only touching his nefesh or ruach. The first time they may have both been very happy. But by the eighth time the distance between them was enormous.

Tying It All Together

Let's now apply this analogy to the Talmudic disagreement mentioned at the outset. Beit Shammai say we structure the law according to the average Jew who uses only his nefesh. Therefore, it is logical to start off with eight candles the first day when the novelty of the mitzvah and the flash of inspiration elevate the act for even the average Jew. Since each ensuing day becomes less intense and more routine, we naturally decrease as we go.

Beit Hillel may in fact agree that the majority of Jews experience Chanukah on a lower, nefesh level. However, they say that the law in this case must be groomed according to the minority of individuals who strive for the deepest experience and the greatest spiritual heights. Accordingly, we start off with one candle on the first day and increase each ensuing day. The law reflects the experience of the elevated Jew, whose experience increases with intensity as Chanukah wears on.

This distinction encompasses a larger question that relates to the way in which we live our lives. Should I live my religious life as I presently feel it? Or should I act as if I live on a higher level in the hope that I will eventually live up to it?

Each of us has a dormant quality inside that is capable of coming to the fore with proper coaxing.

There is a valid reasoning for each one. The first approach is valid because one doesn't want to be a hypocrite. We don't want to make ourselves out to be more than we really are. We want to be what the Talmud refers to as tocho k'boro, “one whose inside is like his outside.” Therefore, we live according to the reality we feel at the moment. We don't try to be more than we are. The drawback of this life philosophy is that there is a danger of accustoming oneself to a mediocre standard. We may not reach the heights because we don't ever strive for them. We have boxed ourselves into a self-fulfilling prophecy based on our limited perceptions of ourselves.

The second approach, on the other hand, has the advantage of opening us up to our inner potential that we otherwise may not had ever known. In the classic Jewish ethical writings it's called, “The outside awakens the inside.” Each of us has a dormant quality inside that is capable of coming to the fore with proper coaxing, just like coal has a dormant energy capable of getting ignited with the proper methods. “The outside awakens the inside,” means act as if you are on a certain level even though you may not be there yet, because our actions have the power to access internal states otherwise unavailable. They can help us retrieve untapped potential waiting to be transformed into substance.

In truth, this is the idea of education, "chinuch" in Hebrew. The word chinuch shares the same basic root as the word Chanukah. Chinuch, like Chanukah, ideally is meant to instill in us an image of what we can be -- no matter how far from that image we may begin. This is also connected to the other meaning of the word Chanukah, “dedication.” With dedication to an ideal, a vision, we can shoot for the stars and heights previously thought unreachable. After all, that is really the goal of education -- not just conveying information, but inspiring within a person a sense of who they can ultimately be.

Jewish law is in accordance with Beit Hillel. We light one candle on the first night and continue increasing and building our potential to the eight candles lit on the last night. Thus, according to this perspective, the law tells us that our first responsibility is to strive for the heights. Mediocrity as a predetermined lifestyle is unacceptable.

However, the ruling of Beit Shammai must also be taken into account. We need to know ourselves and where we are realistically holding. And we must not lose touch with that reality. The last day of Chanukah should be the apex of experience. But all too often it is not.

Taking both opinions into account we emerge with the following Torah philosophy about life: We should strive to reach the greatest heights, even though (or because!) they seem just beyond our reach, yet honor the reality of where we are -- taking proper precautions, proceeding step-by-step, not depending upon miracles -- even as we scale the stairway to heaven. 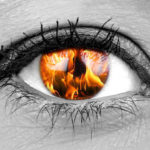