My First War: The Aliyah Chronicles #6 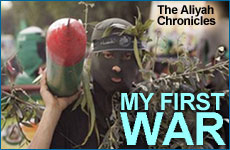 Missile threat in New Jersey? Is this really happening to my life?

When school was cancelled today, and a siren drill was ordered for noon, I knew I was not in New Jersey anymore. This was not a snow day, and stockpiling emergency supplies would not be considered the act of paranoid person, but rather that of a responsible mother.

I studied the difference between the Katayusha, Grad and Quassam missiles in between frying pieces of white fish.

At the vegetable store, I listened to the frustrated response of a former Gush Katif resident as I placed my tomatoes and zucchini by the cash register,

"I thought because we were forced out of Gaza, maybe (in that merit), the missiles wouldn't come here." She dropped a lemon into her bag.

I ran to the local market to buy water and chocolate wafers for my kids for the Mamad (safe room) in my house.

I mused over my decision in America to move to a "safe place" in Israel.

"There is no safe place in Israel," the woman in the vegetable store informed me. I nodded my head and smiled.

How ironic that here I was in my idyllic setting. "It's so picture perfect. It looks like a Hollywood movie set," I recently told a visiting friend.

And now, there was a potential missile threat. Is this my life?

"How are you handling the situation?" an Israeli asked me delicately. She knew that back in New Jersey I didn't have a "safe room" with a steel door, concrete and metal walls and a metal window closure. She understood that I'd never heard a warning siren before.

But as my Ulpan teacher comforted me with a big smile on her face, "What should you worry for? The Almighty is in control...He performs so many miracles for us." And it's true. Just think of the missile that hit a kindergarten last week. Thank God, the children were at home asleep.

The native Israelis appear calm. They've been through this before. "We can't stop our lives."

"Israel is the safest place in the world," an Israeli woman reassured me. "Here, there is faith, emuna."

I suppose when missiles and terrorism threaten your daily existence, you have nothing else to depend on but God.

But the feeling of faith goes deeper than that.

A meeting was called for Anglos to discuss the situation with a Home Front Command representative and a social worker. The social worker looked at us knowingly. Originally from America, she'd been here long enough to understand,

"In Israel, the facade of personal control that we might have felt so strongly outside of Israel is lifted. It's a relief. We do the best we can and the rest is up to God."

We have practiced running to the Mamad in 60 seconds and locking ourselves inside, lying on the floor face down covering our heads, and discussing the importance of staying away from windows during an attack. We know what to do. But if I'm driving in the car down a highway with four kids buckled into car seats and no shoulder to pull over to -- will I get everyone out and on the ground in 60 seconds? I understand more than ever, that, ultimately, I'm not in control.

So instead of focusing on what could be, we are all trying to focus on what to do.

There is more unity among us. It reminds me of New York just after 9/11.

The children did not come door to door today selling Girl Scout Cookies. They came knocking to collect packaged food, warm gloves and scarves for our soldiers on the front lines. In my house, we baked cookies to send to them. We gave money.

"I cleared out my cupboards," one woman shared with pride. We are perhaps 2 or 3 degrees of separation from the Israeli soldiers, the young men and women, barely out of their adolescence, fighting to protect our Jewish homeland.

We are saying Psalms together, learning Torah with more focus, and seeking opportunities to help each other.

"Do you need a ride home? Can I carry that for you? Let me watch you child while you run errands."

There is more unity among us. It reminds me of New York just after 9/11.

We are scared, but we are also connected to something bigger. Something beyond the scope of our daily lives.

"Nothing good comes easy," the social worker affirmed for us.

The rumble of fighter jet planes has become the soundtrack to our lives, a constant reminder that there are people out there as I write this, fighting to protect us and to protect those that have been under a constant threat for years.

I'm not in New Jersey anymore.

Israel, Tikkun Olam and the Tsunami

Funeral for Baruch
Mind Over Milkshakes
Love the Convert
In the Shadow of David and Goliath
Comments
MOST POPULAR IN Israel
Our privacy policy
Aish.com Is Looking for Great Writers