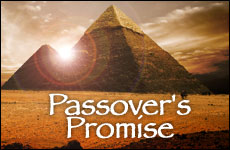 The current turmoil and the memory of miraculous redemption.

These days the only thing that keeps me from drowning in despair is remembering the Exodus from Egypt.

The global financial "crisis" (a euphemism for the unspeakable reality "Depression," like a violin case hiding a deadly weapon) is gunning down more people every month. It liquidated 651,000 jobs in the United States last month alone.

The financial section of the New York Times reads like a cross between a horror story and Nostradamus on the end of days: "In key industries -- manufacturing, financial services and retail -- layoffs have accelerated so quickly in recent months as to suggest that many companies are abandoning whole areas of business. ‘These jobs aren't coming back,' said John E. Silvia, chief economist at Wachovia in Charlotte, N.C.... 'There are going to be fewer stores, fewer factories, fewer financial services operations...'‘The current pace of decline is breathtaking,' said Robert Barbera, chief economist at the research and trading firm ITG. ‘We are now falling at a near record rate in the postwar period and there's been no change in the violent downward trajectory.'"

Since the "crisis" began, roughly 4.4 million Americans have lost their jobs. Young families I know have calculated that they have enough savings to survive for two more months; then they will move in with their aging parents, and who will pay the grocery bills? Youths who have worked hard to get into good colleges now find that there's no money to pay their tuitions.

My relatives in their sixties, their dreams of a comfortable retirement within reach, have suddenly lost two-thirds of their pension funds. "I'll have to work till I'm 100," one cousin plaintively wrote me.

Here in Israel, even after January's war, the terrorists in Gaza continue to rain rockets and missiles on Israel's southern towns and cities, sending traumatized children and adults running for bomb shelters several times every day. Meanwhile, Iran is restocking the Hamas arms stockpile in Gaza and Hizbullah's stockpile in Lebanon. Last week, A.P. reported that 50,000 missiles are aimed at us in Israel.

How did our ancestors get up in the morning to face another day of slavery?

All this, of course, is minor compared to what Iran has in store for us: nuclear extinction. As the government in Tehran forges ahead with its nuclear program (latest news is that Iran now has enough enriched uranium to make a nuclear bomb) and Ahmadinejad vows to annihilate the Jewish state, we Jews in Israel know that the nations of the world will not come to our rescue.

If our present situation seems desperate, what about theirs? How did our ancestors get up in the morning to face another day of slavery? How did they endure the torture, the humiliation, the purposelessness of slavery year after year, generation after generation?

Theirs was truly a hopeless plight. No slave ever escaped from Egypt. And even if a single Hebrew slave ingeniously plotted an escape and succeeded in slipping past the gates of Egypt, what awaited him on the other side? Nothing but desert! No way to sustain himself. No way to carry enough water to cross the desert on foot. Even in one's imagination, there was no escape.

Egypt of three and a half millennia ago was an empire of unimaginable grandeur. In terms of power and wealth, it outstripped the United States of today. Its construction projects were among the wonders of the world.

Jews today possess one thing that our ancestors in Egypt lacked: the memory of miraculous redemption.

If Israel today, a sovereign state with the best army in the Middle East, is afraid to take any step (even for its own survival) frowned upon by the U.S., imagine how our enslaved ancestors must have trembled at the might of Egypt. To oppose the rule of Pharaoh? To win freedom from slavery by any means -- diplomatic or military? To even resist Pharaoh's soldiers as they grabbed your newborn son to throw him into the Nile? To save your children from the taskmaster's whip? To spare your infant from being thrown into the mortar for that day's bricks?

And yet, into that abyss of suffering, that dark pit of pain without exits, burst the Redemption. No one could have imagined it, let alone expected it. One day people who had been born into slavery and had spent their entire lives without a glimmer of hope heard this man Moses, newly arrived from Midian, announce that the God of their fathers would redeem them from slavery. One year later, they were marching out of Egypt, their backs erect, their gaze victorious over their oppressors, their donkeys laden with wealth, their hearts confident that God would sustain them in the desert and bring them to their homeland. Complete and utter redemption.

We Jews today, wracked by problems, vilified by a soon-to-be-nuclear Iran, cowed by masses of Muslims craving our destruction, possess one glorious thing that our ancestors in Egypt lacked: the memory of miraculous redemption.

The Shabbat morning prayers proclaim: "I will redeem you at the end like at the first time." This Passover let us rejoice not only in the redemption of the past, but also in the hope of the future.

Sara Yoheved Rigler will be giving lectures and "Workshops for Women" in North America in May. For details, click here.
Like What You Read?  Give Jews around the world the chance to experience engaging Jewish wisdom with more articles and videos on Aish. It would make your mother so proud and as a nonprofit organization it's your support that keeps us going. Thanks a ton!

Lost Amid the Pyramids
It Takes A Lot Of Faith To Be An Atheist
How Instagram Brought Back This Nostalgic Soup
What Makes Eli Run?
Comments
MOST POPULAR IN Israel
Our privacy policy