Dating maze #269 - The Art of Compromise 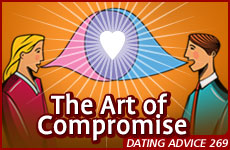 What can you safely cross off your checklist?

I read your answer to Karen, who wanted to know if she was compromising too much by moving to Europe to better acquaint herself with the man she is thinking of marrying ("European Investment" -- Dating Maze #265).

Would you be able to address her original question in greater detail? How much compromise is too much? This is an issue that many singles are grappling with. We are eager to get married, but find ourselves giving up a lot to make things work.

It was easier for us to respond to the Karen's individual situation than to give her broad general guidelines on "how much compromise is too much." That's because so much of this is subjective. A person's willingness and ability to compromise depends in part on how flexible or rigid they are by nature, and how they envision the nature of the husband-wife relationship. A compromise that may work for Karen may not be feasible for someone else.

Before you can even begin to think about making compromises while building a relationship that may lead to marriage, you must know who you are and what you want out of life. You must have a good idea of your short-term and long-term goals in many areas -- education, career, lifestyle, religious world view, family, and involvement in community. You should know your likes and dislikes, the values that you hold important, your personal strengths and weaknesses, and the character traits that you'd like to see in her future spouse.

Many people don't have enough clarity about themselves, simply because they haven't taken the proper time to think about who they are and the direction they'd like their life to take.

One way to clarify how you feel about these issues is to write down your thoughts and then wait a few days to review and think about what you've written. As you sort through your ideas, you may develop a preliminary list of what you're looking for in a future spouse. However, unless you edit that list by prioritizing, it is likely to be too long to be of practical use to you because too many "less-important" wants get mixed in with those that are really important. In addition, that list can take on a life of its own, to the extent that you might consider deviations from it to be compromises that you are not ready to make. As a result, you may pass up many promising prospective life partners. Is this because you're too rigid? Usually, it's more an issue of failure to prioritize.

If you're wondering how you can even begin to prioritize your list, take a look at people who function well in their overall lives. They know that certain goals have to be reshaped from time to time, or set aside to make way for something more important. They'll dream of attending a prestigious graduate program, but choose a different school or career path because they aren't admitted or can't afford the tuition. If they over-extend themselves with too many job demands and community obligations, they learn to say "no" because they know they cannot achieve too much at one time. In each case, they sort out their priorities, so that they can focus on what's most important, rather than the unrealistic -- and ultimately failed -- goal of "having it all."

It's the same thing with relationships that can lead to marriage, and with marriage itself. You cannot regard everything on your list as a deal-breaker.

Of course, the trick is to figure out what to make a priority and where to be flexible. Priorities change at different stages in life. A 21-year-old who dreams of living in Israel may not want to compromise that dream when she's just beginning to date for marriage. She sees a number of different scenarios in which she and the man she will someday marry can realize this dream, and believes there will be many opportunities for her to do so. A 35-year-old, who has achieved many of the goals she set for herself and now meets a potential marriage partner, may resolve the question differently: Here's a man who I care about and has most of what I'm looking for -- except that his present obligations keep him from moving to Israel. What's more important to me now -- having a good marriage that I've been hoping for, or realizing my life-long dream of living in Israel? Which one do I choose, and do I compromise?

Karen decided that getting married to someone she cared about and building a home and family was a big priority for her. She was willing to temporarily relocate and pursue her career in a different country, and he was willing to permanently relocate to her homeland in a few years. Other people change their minds about a variety of factor -- e.g. considering someone with children as a possible candidate for marriage, agreeing to keep a kosher home and incorporating more Jewish learning and observance into their lives, or deciding to step out of the fast track so that they can devote more attention to their future family. Each of us makes an individual choice about which goals or values will be a priority, and which we are willing to defer, set aside, or change.

You asked us when compromise goes too far. It's sometimes hard to draw the line. Some people make major compromises, believing that the trade-offs are worth what they will be getting in return, and they move forward with a positive attitude. Other people can't feel good about such compromises; they may feel they're ignoring their own core values, hopes, expectations, or personality to an intolerable degree. Or, they feel they've been making a variety of concessions that aren't appreciated, acknowledged, or met part-way by the other person. Or, they feel that the more the two of them try to make things work, the more lost, frustrated, or hopeless they feel. Or, it could be that they come to the realization that as much as they want to marry the other person, they've twisted themselves into a pretzel in order to make things work, and get a sense that "it shouldn't be this hard." They are right. These are examples of when compromise can be "too much."

We hope these guidelines are helpful, and we wish you success in navigating the dating maze,

Dating Maze #232 - Cross-Cultural Dating
In the Shadow of David and Goliath
Where Do the Laws of Nature Come From?
Saadiah Gaon, Rashi and Maimonides: How Three Rabbis Revolutionized Judaism
Comments