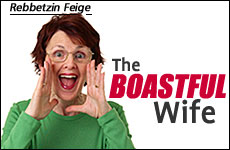 I can't stand it when my wife brags about my accomplishments in public.

Lately my wife has begun to rejoice with friends and relatives in my roles and responsibilities in the community. In conversation, when she reaches a point where she can no longer supply detail regarding my activities, she passes the obligation to me to finish the conversation. It puts me in a very uncomfortable light. Those things in which I am involved provide me with pleasure and satisfaction, simply because I am doing them. I do not need public recognition to motivate me. She, on the other hand, has a need to promote my activities. And then, in a way that is uncomfortable to me, passes the role of public relations agent to me when she exhausts her resources.

I can understand her pride, although I do not share the need for it. How can I temper it?

It is commendable that you do not require accolades or recognition for the work you do that benefits the community. Your admirable attitude is certainly more of an exception than the rule. Most people do need acknowledgement and positive feedback for their acts of kindness.

That being said, it is important to understand that not only giving constitutes an act of kindness but also that to receive graciously can be equally important in human interactions.

Consider the counsel of my friend, Jennie. Prior to her words of wisdom, I used to respond defensively and apologetically when people would compliment me, i.e. the way I looked, dressed, my hairdo, my cooking, lecturing or performance of one kind or another, etc. Jennie wisely pointed out that the correct and gracious response was to simply say, "Thank you."

Sometimes receiving graciously can be more challenging than giving.

Allowing for the other to ‘give' to us by way of compliment or reference to an accomplishment is as much of an act of kindness on our part, as our extending ourselves to others. It is even more so in your case, since you have no personal agenda or need for the attention focused on you. It then becomes an altruistic deed, totally in deference to your wife.

As you well know, there are many accommodations spouses make for each other in marriage, and though your wife's posture might not be your style and even makes you uncomfortable, always be mindful of the fact that it flows from her pride in your achievements.

We say ‘thank you' upon receiving from another because ‘taking' is anathema to a human being's need for independence. Saying ‘thank you' is ‘giving' in return, whereby, in a sense we level the playing field. To give is the more basic and fundamental human need, and therefore much more gratifying to a person's soul than to receive. Consequently, since receiving graciously can at times be more challenging than giving, one needs to strive to embrace that value as well.

Recently, my husband and I were asked to be honorees at the school dinner. Fully expecting that we might decline, the committee lined up all the honorees of the previous years at our front door. These were the people upon whom we had used ‘friendly persuasion' (arm twisting) when they had resisted the ‘honor.' Needless to say, everyone understands that the objective of such events is to raise money for a worthy institution. Invariably, tributes and testimonials will be part of the proceedings. Unequivocally, it is ‘not about us.' It is about benefiting the institution. Maintaining a perspective of ‘it's not about me,' clears out the contaminants of ego and self, and shifts the focus from ‘me,' to the real issue at hand. In your case, it is not about you, as much as it is about giving your wife the opportunity for pleasure.

Implicit in this counsel, is that there be no breach of confidential information in your wife's sharing of your accomplishments.

Additionally, it is instructive to note that Jewish law categorizes the highest level of charity as that which is done anonymously. However, an exception is made if one's act of charity will serve as a motivator for others to do likewise. Anonymity defers to the value of inspiring others. While anonymity is clearly your choice, in defense of your wife's position, there is the possibility that the sharing of your charitable deeds might motivate others to behave likewise.

Excess humility can paradoxically become an expression of ego.

Indeed, modesty and humility are of great value, but in excess, they too can cross the line and paradoxically, become an expression of ego.

Consider the following humorous anecdote. Before the solemn service of Yom Kippur, the Day of Atonement, the rabbi of the community approached the Holy Ark and penitently cried out, "God, You are everything and I, with all my knowledge am nothing." He was followed by the cantor who approached and beating his breast, echoed the rabbi's words of testimony to God's grandeur and admission of his own unworthiness. Then came the shammas, the caretaker, who fell to his feet and asserted similar sentiments of his own lowliness and of being a ‘nothing' compared to God's majesty. As the cantor observed the shammas' self-flagellating confessions, he turned to the rabbi in disgust and said, "Look who thinks he's a ‘nothing'!"

Consider the following historic examples. Saul, the first king of Israel, is described in the book of Samuel, as ‘head and shoulders' above anyone in his generation. Yet, misplaced and excessive humility stripped him of his throne. He lacked the pride and confidence of a king. In his errant humility, he let the people lead, deferring to their wishes rather than insisting on fidelity to the command that God had given him through the prophet. The excoriating words of the prophet say it all, "Even if you are small in your own eyes, did you not realize that you are a king of Israel?"

Contrarily, Moses, who was the most humble of people, was nevertheless cognizant of the great role he needed to play as the legendary ‘teacher' of Israel. The verse in Psalms that reads, "the humble shall inherit the earth," has been translated in non-Jewish sources, as "the meek" shall inherit the earth, which is an expression of shying away from one's innate worthiness. In Judaism, however, meekness is not a virtue or a value. Humility on the other hand is a virtue and speaks to an awareness of potential not yet fully realized. Moses, the greatest prophet and teacher of all times, was humble because he understood that he was merely the instrument upon whom the Almighty played His celestial music. He also knew that the more worthy a conduit he would become, the more exalted, pure and uncompromised would be his transmission of God's Law.

Hence, our definition of humility is acknowledging that all that we are, our unlimited potential and grandeur is God-given. Simultaneously, we confront the reality that to bring that potential to fruition, we still have a long way to go.

If you are concerned that the need on your wife's part to sing your praises is excessive, you might want to discreetly explore whether your wife has enough of a personal identity. There are situations where in the absence of a personal sense of self and of one's interests that provide a positive self image, a spouse might attach herself to her husband's accomplishments so that by association, it will make her feel better about herself. Clearly, behavior that is excessive may be a red flag that requires evaluation.

1. Encourage your wife to cultivate interests and endeavors of her own.

2. Disarm situations with humor, by not taking things too seriously.

My mother, of blessed memory, was heavily invested in the illusion that her children were the best in the whole wide world. On numerous occasions, she would sit and tell my then young children that I had been the best and smartest student in my entire class. The story grew and got better with time. Pretty soon, I was the best in the entire school, and eventually in the entire region. They never tired of hearing Bubby's tales and actually looked forward to the new expanded and improved versions. Mostly, they loved to listen, because the stories reflected her great love for me, and because of the pleasure and Inachas she derived from reveling in the retelling. When they repeated what they heard to me, and asked if indeed they were true, I would chuckle and assure them that the truth, the bigger and better versions, were yet to come, and that my stock was still on the rise. Humor can defuse any situation.

A Woman For All Seasons

Children, When?
Why Are The Prayers Of Yom Kipur So Repetetive?
Ha'azinu 5783: A Time for Unity!
Twisted Thinking
Comments