The Jewish Ethicist: Oldies are Goodies 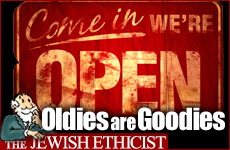 Think twice before changing a familiar place of business.

Q. I generally patronize a certain merchant. Recently a new establishment has opened up, and I would like to try them out and maybe even give them part of my business to help them get started.

A. Many people would consider your question merely a practical one, not an ethical one. But the sages of the Talmud challenge us to consider seriously the consequences of changing whom we do business with.

The Torah tells us that when the patriarch Avraham returned from Egypt to the land of Canaan, "And he went on his journeys, from the south to Beit El, until the place where he pitched his tent at first, between Beit El and Ai." (Genesis 13:3.)

The Talmud finds a hint in the words "his journeys," suggesting journeys that he had already made, and also in the phrase "where he pitched his tent at first", and suggest that Avraham made a special point of lodging in the same places he stayed on the way from Canaan to Egypt. They use this inference as an instructive example for a lesson: a person accustomed to a particular place of lodging should stick with it unless he has a good reason to change. (1)

The passage begins with the following somewhat provocative difference of opinion:

Until what limit should a person stay with his accustomed lodgings? Rav said, until blows [until he hits you]; and Shmuel said, until he hands you your luggage.

Ultimately, the passage concludes that there is really no question that if the innkeeper hits you or hands you your luggage you should go somewhere else. The true conclusion is that a person should stay in the same lodgings until he has evidence that the innkeeper is of bad character. The passage continues:

And why is this? As it was said, because it hurts another's reputation and his as well.

The explanation is simple. If you are accustomed to a particular merchant and suddenly stop, then people may assume you had a falling out. Perhaps the service is not as good as it was (hurts another's reputation), or perhaps you have suddenly become fussy or even unwelcome (his as well).

That doesn't mean that you should never change merchants. Your considerations are valid ones; sometimes it's good to see if newer is better, or to give a new business a bit of a helping hand. But with the insight of this Talmudic passage, we can weigh these considerations against sensitivity to the reputation of the customary place of business, or our own. Maybe you should wait until your customary supplier is closed, or start out with some product of service that he doesn't provide.

The Jewish Ethicist: Perform, Then Pay

The Jewish Ethicist: The Ownership Society

The Jewish Ethicist - Anonymous Blogs
Vayelech 5783: Regret and Repent
Rabbi Sacks: Focus On the Important, Not the Urgent
Put Your Foot Down: Are Human Feet Poorly Designed?
Comments
MOST POPULAR IN Current Issues
Our privacy policy
Aish.com Is Looking for Great Writers