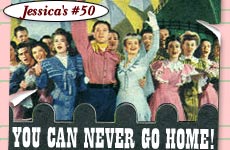 Searching for life direction, Jessica heads back home. And maybe, just maybe, she's there to stay.

"Jessica, if you go to Gennardi's one more time, I am going to kill you."

My sister was serious. It was T-minus two hours before The Event of Lower Merion's social season: Beth and Aaron's engagement party.

"I just want to check one more thing at Gennardi's, though," I pleaded. The new (to me, at least) grocery store 10 minutes from my mother's house was nothing short of a miracle -- its rows and rows of great gourmet healthy fare. And all I could think was how Rina would go absolutely nuts over it -- a regular, up-scale suburban grocery store, but this one with not only an amazing florist, but its own kosher deli and takeout counter, kosher dairy section and --

"Mom, she is not normal," Beth said, turning to my mother as if I wasn't in the room.

"She's here for two weeks and she's spent at least one of them at the supermarket, ooh-ing and ah-ing over vegan lasagnas. Either they don't have food in Phoenix or," she turned back to me, an impish smile on her face, "she is sick of her nauseatingly bridey sister and the arguments you and I keep having over whether or not to serve salmon canapes at the party."

I smiled wanly as my mother came around the island in the kitchen and hugged me. "I'm just glad she's home, even if she does keep disappearing off to the store."

If we were a sitcom, I mused, the studio audience now would coo appreciatively and lightly applaud. Hmm. Was I the disappeared sibling, like "Chuck" on "Happy Days" (Richie's older brother -- yes, he and Joanie had one!) who vanished after the first season, probably off to some obscure Midwestern college lacking sufficient production facilities for a proper spin-off.

The truth was I had been hiding. Sort of.

I was returning, not the Prodigal Daughter, but one totally unsure of what I was going to do next.

I hadn't been home for more than a long weekend since moving to Phoenix nearly two years ago. Now I was returning, not the Prodigal Daughter, but one totally unsure of what I was going to do next. I'd just quit my job and stopped dating Marc, and didn't have any prospects for replacing either of them. I had spent the last 10 days sleeping in the narrow bed in the pink, white and green room in which I'd grown up. The just-beginning-to-yellow posters from "Oklahoma" and "Once Upon a Mattress" seemed to mock my now-bygone theatrical talents. They hung on the walls alongside certificates for writing or debating awards I'd won at various points before I started paying my own rent.

Most of my friends had, at some point, lived at home for a long enough period to have packed away all such memorabilia. I hadn't, and so the mementos had stayed, anachronistic achievements now teasing me: "Ha! You were so much more together at 17 than you are now!"

Beth was pushing me to move back east. My parents, Boutros Boutros Ghalis that they are, said that they would love to have me closer to home, but that they wanted me where I would be most happy.

On one hand, I knew my professional prospects were infinitely better if I moved back to New York, or even Philly. I liked the idea of being within driving distance of Beth and my parents, especially if we were, unthinkably, heading into some sort of war.

Aaron, Beth's fiance, had wondered if that wasn't a significant part of why I was feeling so off-kilter.

"Everyone's view of reality has shifted," he said, "so it's to be expected that you would feel like you don't know what's in front of you."

Beth had been thrilled that he and I had hit it off. We'd done brother/sister-in-law bonding when he gallantly accompanied me on a soy-pudding reconnaissance mission.

I mused. The lack of clarity because of the world's situation was one thing -- but on some level, I felt like I now had a better sense of who I was. I've always been irritated by the modern proclivity to define oneself by your job. Who you are is what you do.

I'd always had a love-hate relationship with my "cool" job, with the way it gave me cache at parties.

I'd always had a love-hate relationship with my "cool" job, with the way it gave me cache at parties, even as it irritated me because people were relating to someone who worked for a fashion magazine, who could drop names, or get invitations to exciting events. And the truth is -- as much as I rolled my eyes at other people's foibles, I loved it myself.

"But now I see that, in the end, that's not ultimately important to me," I told Aaron, "or at least, there are other things far more important."

"I feel like leaving my job, as completely melodramatic and cheesy as this sounds, sort of revealed me." I looked pleadingly at him, sure I sounded like some New Agey author of self-help books. I couldn't read his face.

"It's not that I want to go join an organic farming commune in Idaho or something," I said, "but I feel like I have a chance now to be – man, do I sound lame -- more true to myself."

"So, do you want to, um, work in a non-profit or something?"

I laughed. I must sound nauseatingly earnest. How could I put it into words? In my letter, I'd written that the beauty of a person -- man or woman -- is internal, their deepest core, their essence. I felt like I'd drawn on that essence to walk away from my "dream job." And now I wanted to somehow develop it.

I was spared from further thought, when just then, I heard my name -- well, what my mother's friends from 15 years ago think my name is -- being shrieked across the humous and soy cheeses.

"Hi, Aunt Bonnie," I said, wishing I could melt into the dairy case. "How are you?"

My mother's friend Bonnie, forever "Aunt Bonnie" to me, has a way of speaking that illustrates the treble clef: each word precisely one note up the scale. If she talks a long time, we fear she might shatter glass.

Aunt Bonnie speaks in treble clef. If she talks a long time, she might shatter glass.

"Is it TRUE what I hear?" she said, looking me up and down, not even seeing Aaron. "You QUIT your job? You don't know what you're doing NEXT?"

Always subtle, Aunt Bonnie, I thought ruefully. I shrugged, knowing full well that my response -- or lack thereof -- was not going to stop her from talking.

"So maybe now you'll get MARRIED," she said, in a voice loud enough for everyone in the meat department several aisles away -- or for that matter, everyone in Woodbury, N.J. -- to hear. "You're still a PRETTY GIRL, you know..."

-- I am in a Wendy Wasserstein play, I thought miserably.

"But MAZAL TOV on Beth!" she bellowed. "Thank gawd! It's about TIME. We were all so WORRIED... a good boy I heard, but NOT SO BRIGHT, not like HER."

At that, Aaron snorted. She looked over, noticing him for the first time, and looked back at me.

"Aunt Bonnie, this is Aaron, Beth's fiance," I said, wincing.

Aaron smiled brightly: "Hi. I'm the lucky feller..." he said, with just enough of a gulp in his voice that I knew he was trying to keep a straight face. Aunt Bonnie paled under her tan, but graciously exchanged greetings. Around then, Bonnie's husband passed by, pushing a cart laden with flavored soda water and an assortment of gourmet-looking cheeses.

I'd always liked "Uncle" Stu. He was as boisterous as his wife. And like Bonnie, he could always be counted on to say what he thought. And he did.

I smiled what I assumed was a pallid grin.

"You don't leave a good job until you get another one, kiddo," he said, looking to Aaron for confirmation. "Make your moral statement if you have to, but wait until you're sure it won't affect your bank statement."

-- With a bit of practice, I thought, he could launch a rap career. Make your statement, but be prepared for the latement, of the datement...

I told them how I really wasn't sure of what to do now. Should I look for a job here? Go back to Phoenix?

I didn't think so, but I wasn't sure.

"Well, kiddo," he said, leaning down to the club soda and propping his arms on the baby seat. "I have a proposal for you..."

And that's how "Uncle Stu" offered me a job.

I could move home. Leave Phoenix. Leave my new friends. Leave the roots I was starting to put down.

Totally out of the blue. Nothing I'd done before. Developing publicity and marketing strategies for his sporting goods stores. He said he'd "take care of me" salary-wise, which I knew meant he'd be generous. I could move home. Leave Phoenix. Leave my new friends. Leave the roots I was starting to put down.

Rina had said that I'd be paid back, in one way or another, for standing up for what I believe in.

Jessica #52 - Getting the Full View

Jessica #62 - Rejected Rebound
Near Death Experience Panel
The Western Wall: The Heart of the World
Ask the Right Question: Tisha B’Av
Comments
MOST POPULAR IN Dating
Our privacy policy
Aish.com Is Looking for Great Writers