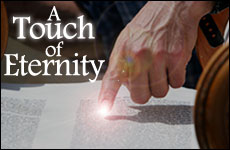 Magnetic, spiritual, ancient and contemporary -- a Torah scroll connects Jews of every stripe to every other Jew of the past, present and future.

Looking into a Torah scroll is very much like standing before the Western Wall in Jerusalem. Something deep inside you says, "There it is!" It has been assaulted, defiled, even neglected -- yet it stands unchanged forever. We feel its power, yet few of us understand it.

Magnetic, spiritual, ancient and contemporary -- a Torah scroll, known in Hebrew as a Sefer Torah, connects Jews of every stripe to every other Jew of the past, present and future. This mystique began more than 3,300 years ago, when the fledgling Jewish nation camped in the desert and grappled daily to understand and adopt the new lifestyle of Torah laws Moses labored to teach them.

Every Torah written since that time -- whether it was created in Baghdad, Warsaw, Shanghai or Beverly Hills -- contains the same text, written letter by letter in exactly the same sequence. This fact alone unifies the Jewish people worldwide as nothing else can. But there is more to a Sefer Torah, much more, that gives it eternal life.

If you ask Rabbi Tzvi Chaim Pincus, founder of Tiferes Stam Judaica, he will tell you that the writing of a Sefer Torah is a powerful experience, for it draws upon the spiritual resources of the Jewish soul.

Tiferes Stam has been instrumental in arranging for the writing of Torah scrolls in every corner of the United States and Canada, not to mention similar endeavors abroad. Rabbi Pincus notes that in every part of the world, and for centuries, Jews have dedicated the writing of a Torah scroll to commemorate, honor, or to strengthen other Jews. Why choose that venue?

"Because a Torah scroll is alive!" says Rabbi Pincus. "It has a spirituality all its own, and it becomes an integral part of the community. Since most Torah scrolls are used for more than 100 or even 200 years, it is a remembrance that really lives on."

There is always a story as to how a Sefer Torah came to be written. For example, Rabbi Pincus recalls when he received a phone call from Rabbi Moshe Travitsky, who heads a small synagogue and kollel outreach center in Bensalem, Pennsylvania. It seems that a most unusual child lived there. Her name was Tali Twersky, and she had decided at a young age to view life through the lens of Torah. An "honorary member" of the kollel, she studied with the rabbis along with her father and brother, walked the three-mile round trip to the shul on Shabbat morning, and then came back for the afternoon service!

At her Bat Mitzvah celebration, her day school principal referred to her as "a walking Torah."

But Tali would have to face an enormous test of her faith. At age nine, she was stricken with a form of cancer so rare that conventional treatments were of no avail. Desperate to save the child, the community raised tens of thousands of dollars to help pay for experimental therapies. There were successes and setbacks, but Tali struggled on, encouraging her parents, Mel and Arlette Twersky, to see her ordeal as a blessing. At her Bat Mitzvah celebration, her day school principal referred to her as "a walking Torah."

A year later, Tali passed away. It was then that Rabbi Travitsky approached Rabbi Pincus about writing a Sefer Torah dedicated to her memory. The tiny Bensalem congregation again galvanized to raise funds, later taking their campaign to other Jewish communities. At each event, people "bought" letters or favorite passages of the Torah -- written on the spot in their behalf by the scribe. "The Talmud says that if a person writes even one letter, it is as if he wrote the whole Torah. It's a moving and wonderful way to fulfill the obligation, and everyone can afford it," notes Rabbi Pincus. "A spiritual connection is formed between the donor, the scribe and the holy Torah; it's a transcendent moment."

Like the birth of a child, the creation of a new Sefer Torah is greeted with multiple festivities. After the commitment is made to write a new scroll, choices are made concerning which scribe's calligraphy is preferred (the main reason Torah scrolls vary in price). A mantle (fabric cover, usually velvet) is chosen as well (usually two - with a white one to be used for the High Holidays) -- with the appropriate tribute to be embroidered on it -- as is a silver crown.

The writing begins at a celebration called Hatchalat Sefer Torah, literally the beginning [of writing] a Torah scroll. This is often a joyous communal celebration, with many people taking part in writing the first letters. A second event, the Siyum Sefer Torah, is held at the completion of the Torah, usually followed by the ceremonial procession of bringing the "newborn" Torah to its new home in the synagogue where it will reside. This "bringing in" of the Torah, dressed in all its finery and its sparkling new crown, is called Hachnasat Sefer Torah.

It is difficult to characterize the atmosphere at a Hachnasat Sefer Torah. Marched under a chupah like a bride, the center of carnival-like jubilation, the Torah yet commands dignity and honor. For many of the participants, this final procession signifies the end of a long road.

"To tell you the truth, I dreaded it," admits Arlette Twersky, "I thought it would be like a second funeral for Tali and I thought I'd be crying the entire time." Yet when the time came for the Hachnasat Sefer Torah in Bensalem, the Twersky family was touched by the massive turnout. Scores of people they had met during Tali's illness came -- not to pay somber respects, but to celebrate the new life that would begin in her name. "A number of people worked through the night before to decorate the shul. It was beautiful," Arlette recalls.

The last few letters of the Torah were completed at Rabbi Travitsky's house. When the procession began, there were flags, music and singing. "We walked arm-in-arm behind Tali's Torah to the shul. It was very powerful."

Rabbi Pincus remembers that moment well. "It's the eternal march of the Jewish People," he says. "No matter where we go, our living Torah is right there with us."

Grieving for Mumbai
Vayelech 5783: Regret and Repent
Rabbi Sacks: Focus On the Important, Not the Urgent
Put Your Foot Down: Are Human Feet Poorly Designed?
Comments
MOST POPULAR IN Israel
Our privacy policy
Aish.com Is Looking for Great Writers