The Fatal Crash: A True Story 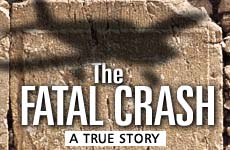 Feeling a personal loss helps us understand the loss of the Temple in Jerusalem.

Larry Taylor stood on the platform and spoke loudly to the auction crowd. It had been his own idea to auction off goods and services, and it was going well. He was making lots of money for the synagogue's building fund.

"Oh, here's one that's really special. A 45-minute airplane tour in a small plane. See your house from the sky. I'll start the bidding with 100 dollars. Do I hear 150?" Larry saw a hand in the audience go up. "I have 150. Do I hear 200? Two hundred!” The bidding increased steadily until it reached 300 dollars.

Larry was surprised when he suddenly heard a familiar voice that until now had not entered a bid. "Three-fifty!" Nobody else bid higher, so Larry called out. "Going once? Going twice? Sold to my son Jason for 350 dollars!"

After the auction, Larry said to his son, "I never knew you wanted the airplane prize." He chuckled. "If I did, I would have made the bidding even higher!"

"Actually, Dad, it's your birthday present. I figured that you, me, Mom and Charice can go."

Larry was surprised, then smiled with pleasure. He had a good son, all right. "You know, I always wanted to see our house from the air. Elaine will be so thrilled."

Larry came home with the same broad smile still on his face. He walked into the kitchen and told his wife, "Guess what, dear? Jay bought the airplane tour for the four of us."

"Oh, that's wonderful! When will it be?"

Elaine opened the kitchen cabinet and checked her calendar. "Did you say the sixth? Oh, I can't make it that day. I'll be at a meeting; we're planning a tour to Israel."

Larry squinted at the calendar. "Can't you change something? Maybe postpone the meeting?"

"I don't know, it's so hard to get everyone to agree on a date. I just don't see how I could change it. I really have to get moving to get this tour together in time for Batsheva's due date."

Larry tilted his head slightly and sighed. "What a pity. We'll just have to go without you."

The night before the plane tour, Larry's heart was beating so hard with anticipation that he had trouble concentrating on the movie the TV was showing.

Exactly that same moment, 5,000 miles away, his son Baruch joined the crowd slowly getting off the bus at the Western Wall. On Tisha B'Av, when most restaurants and bars are closed, the Kotel plaza was jammed.

Baruch took one look at the Wall as he walked up the steps to the Jewish Quarter. The people near the Western Wall were sitting on the floor reading from the book of Lamentations, but many other teenagers at the back of the plaza were socializing as if they were at a cocktail party. Well, he thought, at least they came to the Kotel on Tisha B'Av, even if they weren't showing proper respect. "And anyway," he thought, "do I know any better than they do what today is all about? I barely understand the Kinot; I don't really know what the Temple meant to our people. I sure don't feel much bereavement."

I don't really know what the Temple meant to our people. I don't feel much bereavement.

The custom at the yeshiva was for each student to give an introduction to one of the Kinot. Baruch prepared Kinah number six. When his turn came, he got up and said what he'd been thinking. "One of the problems we all have on a day like Tisha B'Av is that it's so hard to internalize what went on during the destruction of the Temples. It occurred to me that to get a taste of what it was like, while we're saying the Kinot each one of us could think about a tragic thing that happened in his own life. It would only be a tiny taste, but it would be something."

Late on Tisha B'Av afternoon, while Baruch was at the Western Wall, his father Larry, his brother Jason and his sister-in-law Charice drove out to tiny Bi-State Parks Airport. Larry felt like a millionaire going to his own private jet.

But then, seeing the sorry excuse for Air Force One that awaited him, his dreams shattered. The single-propeller plane was not much larger than his car. The door opened to reveal the stairs, and the three climbed in and took their seats.

"Hello," announced the pilot, "my name is Yarom and I am your pilot today. Our tour will be about 45 minutes and will be sure to fly over your neighborhood."

"Yarom?" asked Larry. "What kind of name is that?"

"It's a common Israeli name. I was a pilot in the Israeli air force before moving here six years ago."

"Is that so? My son Barry lives in Israel. Now he goes by the name of Baruch."

Jay insisted that Larry sit up front next to the pilot. Yarom started the engine and explained some of the instruments on the control panel, but with the noise from the propellers it was difficult to hear. The plane quickly picked up speed on the runway and took off. We can only surmise what happended in the cockpit. The passengers were surprised how bumpy this ride was compared to the jumbo jets they were used to. It was hard even to pay attention to the landscape under them.

A few minutes later, without warning, the plane began a downward spiral toward the ground. At first, Larry thought Yarom was showing off, but the look of terror on Yarom's face told Larry to fear the worst. All he could do was hold on and await the impact. The crash occurred not far from the spot they had taken off from seven minutes earlier.

Baruch was breaking his fast when the phone rang. Who would call so soon after Tisha B'Av had ended? He reached across the kitchen table and answered the phone on the second ring. "Hello."

There was a long delay. He wondered if anyone was there.

"Hello?" he said a second time.

Finally he heard a faint voice, so soft that he barely recognized it. "Barry?" His mother's voice was shaky, barely audible. Obviously something wasn't right.

"So terrible," she said in a whisper.

"What's terrible? What happened?" Baruch said, trying to hide the panic in his voice.

He felt his whole world crash; it was Tisha B'Av all over again.

"Hello? Mom? Are you there?!" Suddenly all Baruch heard was a dial tone. He dropped the phone and stared at the table for many long seconds. He felt his whole world crash; it was Tisha B'Av all over again.

His wife sat staring silently at him. Finally, when she thought he could hear her again, she simply asked, "What happened?"

Baruch drew a sobbing breath. "My mom just said that my father, brother, and sister-in-law were in a plane crash," he said as he looked at the floor, dazed.

What had his mother just said? Were they dead? How could that be?

His thoughts were interrupted when the phone rang again. "Mom?" Baruch said without even a Hello. The voice was slightly more audible this time. "They took a flight in a small plane, and it crashed. Nobody survived."

"Yes. It happened today. Barry, please come back to St. Louis right away."

Baruch managed somehow to get a seat on the very next flight. He arrived in time to help with the funeral arrangements.

One day after davening at the shiva house, Baruch asked Rabbi Pressman how to make sense of this tragedy.

Rabbi Pressman thought a moment and answered, "I can't tell you how to make sense of this. The tragedy is beyond words. But I can tell you that this is a taste of what Tisha B'Av is all about. You've had your own personal destruction, and you know how mourning feels. Perhaps you, with your heartfelt mourning, will be the one to bring the rebuilding of the Temple and the Jewish nation nearer."

Baruch was speechless. He remembered only too well what he himself had said at the yeshiva, just a few days ago. Now he would have to live up to his own words.

The next year, on Tisha B'Av morning, Baruch once again spoke about Kinah number six at his yeshiva. This time, however, he didn't need much preparation.

"Last year I suggested a way that everyone can internalize some of the meaning of Tisha B'Av. Well, for the rest of my life I have that lesson internalized. Tisha B'Av is my father's and my brother's yahrtzeit."

Reprinted with permission from "Monsey, Kiryat Sefer, and Beyond," by Zev Roth (Targum Press, 2002). The story is true; the names have been changed.

Zev Roth lives in Israel with his family. He is the author of several novels and story collections, including 10:10, Monsey, Kiryat Sefer, and Beyond, and The Monsey-Kiryat Sefer Express, published by Targum Press.

If I Forget Thee, Auschwitz

By The Tunnels of Shuja’iya, There We Sat and Wept

Expectant World
It Takes A Lot Of Faith To Be An Atheist
How Instagram Brought Back This Nostalgic Soup
What Makes Eli Run?
Comments