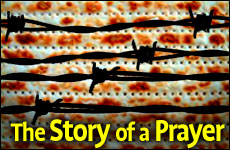 A Seder in Bergen-Belsen.

--- as told by Joseph Freuchtwanger, nephew of Rabbi Davids

It was erev Pesach, 1944. The entire Jewish community of Rotterdam -- men, women, and children -- had just been transferred from Vesterbork, a deportation camp in Holland, to the Bergen-Belsen concentration camp in Germany.

Conditions in Vesterbork had been harsh, but continued religious observance had to a remarkable extent preserved the Jews' dignity and their will to live. Under the leadership of the loved and revered Torah scholar Rabbi Aharon (Bernard) Davids, some semblance of communal cohesiveness and optimism had been sustained. Upon arrival at Bergen-Belsen, however, daily existence took a sudden, overwhelmingly drastic turn for the worse, as most of the things that make a human being feel human were taken away. In what for us -- some 60 years later -- has become a familiar yet impossible-to-imagine scenario, families were divided, people starved, the absurdly hard labor broke body and soul, and disease was spreading fast.

Matzah for the Seder was, of course, unavailable.

Rabbi Davids, then in his early forties -- whose wife and three children had been separated from him upon arrival in the camp -- yearned to keep the spirit of his family and flock alive, even as their physical strength ebbed. Yet under such calamitous circumstances, refraining from eating chametz would surely bring on illness and death for an unknown number of Jews. What should be done during the week of Passover with their small daily rations of bread?

He conferred with other rabbinical authorities in the camp, and after anguished and lengthy discussion of this dilemma, they agreed upon a course of action.

On the 14th of Nisan, the Seder night, Rabbi Davids sat at the head of the long table in the male barracks, conducting the ceremony not from a Haggadah -- for of course there was none -- but from memory. When he reached the blessing, "...Who has sanctified us by His commandments and commanded us to eat matzah..." he lifted up his voice and clearly recited the following prayer, as later translated into English by Prof. Harold Fisch:

Heavenly Father, it is manifest and known to You that we desire to carry out your will in regard to the commandment of eating matzah, and strictly refraining from chametz on the Festival of Pesach. But we are sick at heart at being prevented in this by reason of the oppression and mortal danger in which we find ourselves. We stand ready to perform Your commandments of which it is said, "You shall do them and live by them," (Vayikra 18:5) that is to say, you shall live by them and not die by them. And accordingly we heed Your warning, as it is written: "Take heed to thyself and keep thy soul alive." (Devarim 4:9) Therefore we beseech You that You will keep us in life and establish us and redeem us speedily from our servitude so that we may in time come to perform Your statutes and carry out Your will with a perfect heart. Amen.

He then reached for a piece of bread and took a bite, thereby urging his brethren to do likewise.

Rabbi Davids, along with his son Elijah, died shortly before the liberation of Bergen-Belsen by the allied forces.

His wife Erika and their daughters, along with approximately 2,800 others, were evacuated by train from the camp. During the two-week journey to nowhere, 570 died and were buried in a mass grave somewhere along the way. Those who survived the trip were abandoned by the Nazis near the East German village of Troebits.

In 1947, Erika emigrated with her daughters to the land of Israel, taking with her a copy of the prayer that her husband had composed. She died in a Herzliya nursing home in1997.

Each year, her family and its descendants read the prayer aloud on the Seder night, to hear again how Rabbi Davids asked for God's help, beseeching a shattered people to do the unthinkable and live, not die, by them.

This article originally appeared in Jewish Action, the magazine of the Orthodox Union.

The Soviet Campaign to Eliminate Passover
Scientific Curiosity and the Divine Encounter
Mind Over Milkshakes
Love the Convert
Comments
MOST POPULAR IN Passover
Our privacy policy
Aish.com Is Looking for Great Writers