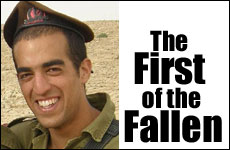 I was introduced to Dvir at his funeral.

Jews attain a high level of unity... at funerals. Thus, at last night's funeral of Staff Sergeant Dvir Emmanueloff, the first Israeli soldier to fall in the Gaza War, the whole spectrum of the Jewish People was present. Black-hatted religious men with grey beards stood next to young men whose for-the-occasion kippa was clipped above their pony tails. Weeping young women, soldiers in uniform waiting to be called to the front (looking grave and a little scared), fellow residents of Givat Ze'ev (the Jerusalem suburb where Dvir had lived), and veterans who knew Mt. Herzl, Israel's National Military Cemetery, much too well -- all came to bury the soldier who had been killed yesterday morning in the vanguard of Israel's ground assault against Hamas terrorists.

This 22-year-old soldier had died so we can live in the Jewish homeland safe from the terror attacks of our enemies.

Most of the couple thousand mourners were like me and my husband, who had not known that Dvir lived until he died and the internet announced his death accompanied by a photo of a broadly-smiling, handsome young man. Why did we all venture out at almost midnight on this cold January night? Because it was a death in the family? No, Jews are buried every day. Rather, we came because we all knew that this 22-year-old soldier had died for us, for the ability of Jews to live in the Jewish homeland safe from the terror attacks of our enemies.

Dvir did not have to be there with his elite combat unit when they charged into Gaza Saturday night in an all-out effort to stop the rocket and missile attacks across Israel's southern border. He was in an officers' training course, exempt from fighting the war. On Friday afternoon he phoned his mother and told her that he had opted to leave the course in order to join his infantry unit, massed on the border of Gaza waiting for orders to attack. "Mom, I have to fight. I have to be there."

Dvir did not love fighting; he loved people. And he loved the Jews of southern Israel. He had attended yeshiva high school in the southern town of Netivot, now under attack by long-range missiles from Gaza. Dvir wanted to protect those people.

Through the eulogies at his funeral, I was introduced to Dvir. A rabbi who had been his high school teacher spoke. He told how this past summer on Tisha B'Av (the date of mourning for the destruction of the two Holy Temples), Dvir's unit was scheduled for arduous training exercises. Dvir could not reach his rabbi to ask if he was exempt from fasting, so he fasted. Running with heavy equipment on his back throughout the hot summer day, his friends implored him to drink, but Dvir persisted in his fast until a military rabbi ordered him to drink.

Dvir's older sister Hadas spoke, or tried to speak through her tears. She described her brother, who was helpful, fun, encouraging, and loving. Dvir had been a counselor of a religious youth group. Even after he entered the army, Dvir would call every one of his former charges on their birthdays to wish them well. He also sent each of them New Year's cards before Rosh Hashana.

As the eulogies continued, the tragedy of Dvir's death deepened. The family's rabbi recounted how exactly two years and ten months ago, he sat by the hospital bed of Dvir's father and watched the machines monitoring his vital signs until they went silent. What? I thought. His mother buried her husband less than three years ago, and now she's burying her son?

Another speaker extended condolences to Dvir's mother and three sisters. What? I thought. He's an only son? His widowed mother is burying her only son? What was this boy doing risking his life in the terror-nest of Gaza?

Dvir's lifelong friend Amichai Peretz answered my anguished question. He told how both he and Dvir had lost their fathers shortly before entering the army. Dvir, now the man of the house, wrestled with the question of whether he should continue to pursue his dream to join a combat unit. Amichai had lost not only his father, but also his older brother, who was killed in action in Lebanon. Dvir went and spoke to Amichai's mother, keenly aware that serving in a combat unit could turn his own mother into a similar victim of double tragedy. In the end, as Amichai explained, "Dvir thought it was important to defend the country and the people in it."

"Dvir thought it was important to defend the country and the people in it."

Two of the eulogies mentioned that Saturday night, hours before he died, Dvir recited the blessing on the moon. This monthly blessing is recited on the Saturday night after the moon, having disappeared into the darkness, again waxes into a clearly visible crescent of light. Our tradition compares the Jewish People to the moon; our fortunes wax and wane throughout history.

We in Israel today are surrounded by darkness: the rising tide of Radical Islam that threatens to engulf us, the nuclear bomb being prepared by Iran to destroy us, the international censure whenever we dare to defend ourselves, the decreasing identification of under-35 American Jews with Israel's fate, our own political corruption and turmoil, and the financial crisis that has devastated Jewish charities, leaving a third of Israeli children impoverished and hungry.

But all it takes for a Jew to make a blessing is seeing a sliver of light. The life of Dvir Emmanueloff and the thousands like him who are today risking their lives in Gaza for the sake of the Jewish nation are that sliver of light. May they be blessed.

Through the Eyes of a Soldier
The Promise Of The Land
Which Chat Are You On?: Parshas Behar/Lag Ba’Omer
Do You Like Slow-Cooked Food? Thank the Jews
Comments
MOST POPULAR IN Israel Diary
Our privacy policy