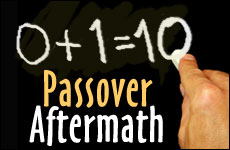 During Passover, the laws of math simply do not apply.

Each year on Passover, our people ask, "Why is this night different than all other nights?" It took me a while to figure it out, but now I know why. It's because the rules of basic math don't apply. No, that's not one of the answers to the four questions, but the Haggadah just happens to support my conclusion.

The Ten Plagues are actually not ten? My math skills need more work.

For instance, there's some dispute among the Rabbis as to how many plagues God inflicted upon the Egyptians. Apparently, ten isn't really ten. What follows is a myriad of interpretations as to what ten really means. One esteemed Rabbi opines that the plagues were fourfold; another that they were fivefold. Either way, you've got some serious multiplication going on. Another Rabbi says that each plague is referred to as the finger of God, but at the Red Sea, the hand of God is mentioned. Let's see: One hand, five fingers, fifty plagues. There are other rabbinic interpretations, all of which make one thing clear: If ten isn't ten, it must be Passover.

The Haggadah is only the beginning of my mathematical confusion. Then comes the Feast. My earliest memories of the Passover meal include my grandmother's bite-sized, sweet-and-sour meatballs, one of several appetizers. Literally, each meatball was a bite, even foroy!-she-eats-like-a-bird me. I'd ask for five, as an example. My mother would ladle eight gravy-smothered meatballs onto a plate, which she'd hand to me. Math has never been my forte, but I knew enough to know the difference between five and eight. "Mom!" I'd protest. "I asked for five! You gave me eight!" "Shush," she'd say. "They're tiny. Eight is like five."

Year after year, this dysfunctional math scenario continued where Five was the new Two, Three was code for Six, and Zero was no longer a number, unless it married One and became Ten. Are you following this? Me neither. It occurred to me that this is the reason I stink at math. At the time I figured, someone's arithmetic is messed up. My mother is the adult; I'm the kid; it must be me. Perhaps unknowingly, I adopted my mother's Meatball Math, not realizing it applied only to those occasions in which the abundance of leftovers evoked a protest from our refrigerator: Enough is enough!

Eventually, I got smart. I figured out the system, but not until I became a teenager and questioned authority for sport did I even think of challenging the meatball numbers game. I learned that "I'll have two" was a euphemism for "five." If I actually wanted five, I'd ask for eight. Only wanted two? Simple.

She ladled two onto a plate and handed it to me. "Take, eat, it's nothing."

See what I mean? Nothing equals Two. I accepted the plate with a frown of resignation, careful not to betray my supreme pleasure that I had become as the Wise Son because I beat Mom at Who's Counting the Meatballs. I had the game down to a science. From then on, I relished playing it year after year just to see how accurate I could get. If only I'd gotten grades for this new math. I excelled.

You won't find a set of measuring spoons that come in fractions of "bissel."

I don't know where and when numbers went awry in Jewish cooking, but I suspect it has its roots in a mathematical equation known as the "bissel." What is that? It's nothing. It's a little bit of this, a little bit of that. It relies on taste and intuition, but you won't find a set of measuring spoons that come in fractions of "bissel."

My mother relies on the Bissel Method, which explains the wild variations in her matzo balls. As for me, I measure. I follow the recipe on the box of matzo meal. It's there for a reason—so you can get as close to matzo-ball perfection as possible, consistently year after year. My mother says, "Acch! I don't follow recipes. I don't measure. I cook old school." Well, apparently.

I haven't even touched on the main course, but I'm already getting full and am more than ready to sing a round of Dayenu. Truth be told, Passover is my favorite of all the holidays. The wonder and beauty of the Seder is what makes it different from all other nights. You can count on it.

An Election First!
G-d Time
Shavuot is The Holiday of Cheesecake and Blintzes
What Does Kosher Mean Literally?
Comments
MOST POPULAR IN Funny Stuff
Our privacy policy