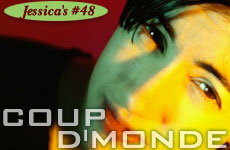 Usually, weeks move by in an orderly fashion. Time seems tidy and life seems normal and, for the most part, logical. Like a free-flowing traffic pattern. Then there are times when life gets into one big traffic snarl, and normalcy gets stuck in the bottleneck along with everything else. Such were the last few weeks.

It all began when Ian, my assistant producer, produced a revolting segment featuring anorexic pre-adolescents made up to look like drug addicts
-- but attired in the latest fashions for teens. It was supposed to be high art, but the images struck me as exploitative and violent.

I had decided to nix the segment -- not able to stomach sending out images like that to hundreds of thousands of hungry-to-conform teen girls -- when it became apparent that intrepid Ian had gone over my head and sent the segment on to the powers-that-be in New York. And they liked it. A lot.

It was supposed to be high art, but the images struck me as exploitative and violent.

"Really, Jessica, we love it," my boss told me.

More than that, I was now double-boxed into a corner: before I could even object, it turned out that they'd shown the segment to the designer whose clothes it was showcasing (and whose print campaign it mimicked) and he ended up wanting not only to sponsor the cable show I produce tied to the magazine, but bought two additional blocks of ad pages in the magazine itself.

My bosses liked the "envelope-pushing," and the publisher loved the revenue boost. Unctuous Ian had given me much of the credit for the vile thing, apparently assuming that I'd be delighted by their delight and not mind that he'd deliberately sabotaged a decision I'd made.

I wasn't delighted. I was disgusted.

And then, in the middle of all of this, the entire world shifted when the planes hit the World Trade Center and it was a full 24 hours before I got info that my cousin, two friends from college and an old boyfriend had all made it out safely. Our entire NYC staff was in a panic for two days, and everyone in Phoenix -- really everyone everywhere -- was in shock.

I didn't think the world had "changed," as everyone kept saying, so much as a reality in the world was exposed. The bubble burst. The mask was torn off and what lay beneath was gruesomely evil.

"It sort of puts the clothing thing in perspective," Marc had tried to reassure me as we sat curled on the couch, in shocked numbness, flipping back and forth between CNN, FOX news and MSNBC.

Somehow, the World Trade Center attack made these clothing ads all the more important.

No, Marc, it didn't. Somehow, it made it all the more important.

I had spent the week prior to the calamity trying to make the powers-that-be see my point of view. Every bit of debating and rhetoric I'd shoved under my belt in college was drawn upon. I went through the iconography of the images, the age of the models, the drugged-out look, the way young girls would emulate it.

Marc had taken to calling me his "little Mary Matalin" (I thought "Norma Rae" was more apt) and told me that, while he understood my points, he thought my life would be easier if I just let it die already.

After a week of getting the telephone equivalent of blank stares from my bosses, I was beginning to wonder if he was right.

"Look," Marc said to me as we walked up Rina's driveway on Saturday, "you've made your point. But it doesn't look like you're going to win this." Rina and Steve had invited us for Shabbat lunch. They hadn't met Marc more than in passing and Dating Coach Rina was eager for an up-close inspection. Plus, they knew how worked up I'd been about the office and I wanted to talk to them about it.

I had forgotten that Rachel, Steve's 12-year-old niece from Atlanta, was visiting. She immediately gravitated to me -- cool, big sister type that I seemed, I guess -- and then was positively overwhelmed with glee when Rina told her where I work.

Watching her eat, I recognized the pathological need to fit in when I was her age.

I found myself watching her while we ate, recognizing the hyper-self-consciousness and pathological need to fit in that I'd had when I was her age. I felt old. The flash of recognition was strong and painful: I felt freshly the sensation of wanting nothing but to disappear, and be the center of attention at the same time, when all you want is to be like everyone else and, above all, to be cool. Or Phat, however people say "cool" now. Well, phat, but not fat.

Rachel was the younger end of our target demographic. It was her -- this vulnerable, sensitive, eager-to-please creature -- who would be absorbing the images Ian had created.

"But now I realize," I told Marc later that night, "nothing Ian did in the segment was so revolutionary. He may have turned up the volume, but the melody is the same. And I look at Rachel and how self-conscious she is and how she thinks she's gawky and ugly... and I just feel awful."

Yes, Ian's segment had crossed some border in my mind. But for months now, I'd been uncomfortable with a lot of what we were doing.

Marc was listening as patiently as he could, I realized. He was being as supportive as I could expect, given that he had made clear that he didn't think any of this was worth it. I couldn't prove that Ian's segment was going to cause a bulimia spike in our viewers, after all.

"Is it that he just doesn't care?" Rina -- in coach mode -- asked me on the phone Monday morning.

"A little," I said. "He is really a good person. He cares about me and he's a mentsch for the most part. But he just doesn't seem to need to reach beyond himself. He doesn't hunger for the deeper meaning -- or the deeper effects of something. He's content to live life on the surface. He's always avoiding the more profound message. It's like his main goal is comfort."

He's always avoiding the more profound message. It's like his main goal is comfort.

"Do you think that that works for you?"

"No, not really," I admitted reluctantly.

Just then, my assistant buzzed me that Joan, the associate publisher, was on the phone from New York. I said goodbye to Rina and clicked over. I knew Joan well -- she'd been my editor when I started as a copy writer at the magazine.

"Jessica," she said, "Your latest memo made its way to me over the weekend. I know things may not have been clear up to this point but let me clarify now: Personally, I agree with you that the piece is a little yucky, but you and Ian did a great job of capturing a certain zeitgeist -- and we got a huge ad contract out of it."

"So you don't feel good about it now. Fine. We all have to live with things we don't like sometimes, okay? Frankly, your concern about this is overreacting. If we didn't run anything that was in poor taste or might warp some young person's mind, we'd have maybe one article and two ads per month. The whole industry is sick, we both know that."

-- This is what she actually thinks?, I marveled -- And she goes to the office every day feeling good about herself?

"You've made your point, but I am telling you as your friend that it's enough," she said.

I knew Joan was giving it to me straight because she liked me. This is a big, bad world, she reminded me... she used to subscribe to Ms. too ... we all make compromises ... we all have to swallow things we don't want ... we all have to hold our noses sometimes...

"So are you going to drop this and get back to work, Jessica?"

I saw 12-year-old Rachel's face in front of me, trying to imagine her looking at those carbon monoxide pictures and thinking that is what she's trying to emulate. The words were out of my mouth before they'd gone through my brain. I said simply:

Jessica #3 - Fumble Into the Future?

Jessica #57 - Balancing Act
Don’t Believe in Other Gods Versus God is One
Seeing Without Eyes
Why Shouldn’t We Eat Whatever We Want?
Comments
MOST POPULAR IN Dating
Our privacy policy
Aish.com Is Looking for Great Writers