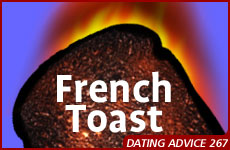 She's ready to tie the knot, but he's just getting in the game.

I am a 34-year-old woman living in Paris. I moved here 18 months ago, after a five-year relationship ended. I came to study music and also to see if I could find someone to marry and build a family with.

About nine months ago, I met a man at the synagogue and was instantly attracted to him. I know it sounds silly, but whenever I imagined how my love would look, it was just like him. When we talked, we realized that he's six years younger than I am. He resisted getting involved because of our age difference. In addition, I told him I would only date for marriage. He said that he also wants to get married, but not as quickly as I do.

Nevertheless we started to date. At the same time, I went through some spiritual changes. Before we met, I had started to keep Shabbat, and I've continued on the path of becoming more religiously observant. He actually helped my a great deal throughout this process. As we kept dating, we shared a lot of experiences and made a lot of adjustments. I made certain changes in my life because I hoped they would help us grow closer and get married to each other.

We fight because I want to get engaged and he's not ready.

But, even though I am ready to get married, the man I am dating is not. So now we fight because I want to get engaged and he doesn't feel he's ready. He doesn't have a stable job and is trying a few different options. I am starting to get disappointed because I don't see that marriage is going to happen soon. I want to have children, and don't want to play boyfriend-girlfriend any more.

What do I do? I love him, but I am starting to lose hope. We're on two different tracks, and right now I feel I'm staying in France just for him. I don't feel this is going anywhere, and I don't trust him like I did before. He says he needs time, but what if I wait for nothing?

It's not uncommon for two people to become emotionally involved in a courtship at different rates. A woman might be attracted to the man she meets right away, and it may be several dates before he realizes that her looks have grown on him and he's really attracted to her. A man may decide he's met "The One" weeks before she feels the same way. Many daters have turned to us asking, "The person I'm dating is ready to get engaged, and even though I think I'm moving in that direction, I need more time. Is that okay?"

If that was all that was going on here, we'd reassure you that this is a common occurrence and then ask you some questions about your courtship and how you relate to each other. If your answers indicated that the two of you were building a solid foundation for marriage and that your courtship seemed to be moving forward, we might encourage you to give this man more time and suggest ways to handle your anxiety levels while you wait. But there's a lot more going on here, and the advice we'd like to give you isn't that simple.

The first point to consider is the difference in your ages. You're fine with it, but it's possible that this man still hasn't come to terms with the idea. While we know many happy marriages in which the wife is 3, 5, or 7 years older than the husband, this is a very personal issue. Is his inability to resolve this difference holding him back?

The most significant issue you have to deal with may be your different approaches to "dating-for-marriage." It sounds like the two of you were on very different tracks when you began to date. Yes, he may theoretically want to get married, but he seems content to take a slow route toward that goal, and meander around a few detours. You, on the other hand, are on the express train, and you've been ready for marriage since you first moved to France.

He may be stalling in order to keep you in his life.

The big question is whether or not this man's perspective has changed during the time you've been dating. Sometimes, a person whose dating is not strongly focused on marriage meets someone he feel is right for him and decides he wants to move up his timetable. Unfortunately, in this case, it doesn't sound like this process has occurred. It could be that he's struggling with trying to decide that he's ready for marriage, and he could benefit from a little more time and some guidance. The key here is whether this will all happen before you become so frustrated that you end the relationship. On the other hand, it's also possible that he currently has no intention of taking the leap to engagement and marriage, and even though he tells you he needs more time, he's just stalling in order to keep you in his life.

There's another possible reason why he's delaying his decision. Perhaps he's still trying to decide whether you're really the woman he wants to marry. Many daters aren't sure what criteria they should use to evaluate what could be a very complex issue. If he's struggling with this, a mentor may be able to help him gain the clarity he needs.

You titled your letter to us, "Time," and that pinpoints the problem here. You don't have a lot of time to invest in this relationship before realizing dividends, for two reasons. One is because you're emotionally ready to move to the next level, and you won't be happy waiting an indeterminate amount of time to see if this man gets there, too. The other is that you've reached the stage in life at which getting married is a top priority, and you've re-evaluated your goals and your lifestyle accordingly. If this man isn't ready for marriage, the only way to pursue your goal will be to end the courtship, heal, and move on.

Can you recognize a pattern to avoid in the future?

It isn't a good idea to wait for something that may never happen. Look back at the five-year relationship you ended a while ago. Can you recognize a pattern that you'd like to avoid in the future?

We think it's a good idea to talk to this man about the points we've raised. If he genuinely believes he is moving toward engagement and marriage, talk to each other about the time frame he envisions and whether he might benefit from the advice of a mentor, a rabbi who is experienced with relationship questions, or a counselor or therapist who helps people with issues like the one he is struggling to resolve.

On the other hand, if he really doesn't see himself getting engaged to you within the next few months and married within a year, we think it would be best to end this courtship and move on. We know that will be a painful decision, but that will free you up -- both practically and emotionally -- enabling you to soon meet the right man to marry.

Dating maze #265 - European Investment
Should I Break Up, Get Engaged or Keep Dating?
Time Is Your Precious Commodity
A Constant World in Flux
Comments
MOST POPULAR IN Dating
Our privacy policy