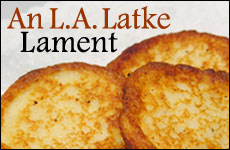 Too many of us are losing our Jewish roots. Even the Latke is assimilating.

As a child, I was reared near the Lender family, heirs to the bagel empire spawned in my hometown, New Haven, Connecticut.
Not satisfied with the a$toni$hing $ucce$$ of their local bakeries, the wonders of their split level ranch home, its iron jockeys with actual horses, their bagel shaped pool, round island for tanning in the middle, just by cranking out those old-fashioned crunchy bagels that fight your mouth back, the Lenders made bagels very big business. They launched such innovations as the frozen bagel in a plastic bag in your supermarket frozen foods section, the cinnamon raisin, the pumpernickel, the green for St. Patrick's Day.

They made the bagel a household word, but in this very effort may have assimilated and Americanized it beyond recognition. What a paradox. In America you can't even mess with state flowers, but an entire culture's cuisine can be bastardized and nobody even kvetches! Many second and third generation Ameri-Jews cannot recall what an aboriginal bagel feels like amidst all this infernal creativity. In recent years, in "we're so hip we're nutty" Los Angeles, I've even had cream cheese flavored bagels, much like sour cream potato chips, for those too lazy or busy to combine two distinct ingredients by themselves.

In America you can't even mess with state flowers, but an entire culture's cuisine can be bastardized and nobody even kvetches!

I fear the same blurry fate for the purity of the potato latke. At this holiday time of year, hankering for the foods of my youth, I went searching my area for that familiar flat, latticed little golden brown crunch-orama, fried in a generous batch of oil (Chanukah being a celebration of oil), served with homemade apple sauce or fresh sour cream--those perfect patties that my mother faithfully recreated from her mother's recipe.

You risk all nostalgia and sentiment when you order your precious Jewish childhood comfort foods from L.A.'s melting pots. After all, this is the land where they put pineapple on pizzas. You could get digestive amnesia, eating what people pass off as Jewsine around here, and bury the real thing in the recesses of your baffled palate. See, a lot of our Jewish deli kitchens in Los Angeles are manned by those lovely folks from the Southern Americas, gracing your latkes with jalapeños and red pepper flakes while our Jewish brethren are at the door welcoming you, at the cash registers charging you.

I visited one famous 'mother of's' kosher eatery, decorated with her son's film posters brazenly staring you down on you like the Almighty Himself. Here I found an improvisation on the theme: blackened strands around a peppery pudding-y mound of oily potato--Cajun? I think not. More like the home fries fabricated from frozen shredded potato product found in highway diners, with a bit too much pepper.

Some other local delicatessens' were very spicy (cayenne?), some dicey (the potatoes cubed rather than grated?), some more like fritters which could have contained anything from fish to farm animals, so unrecognizable was a potato flavor amidst the puffery. One local noshery's pancakes were like Egg Foo Young, and I glanced in the kitchen to see affable Asian folks preparing them with their blessing from the Far East, corn starch. Rumor has it that the best latkes in this area are at a deli called Brent's, located on the earthquake fault line in our Valley city, Northridge, so God knows how long one will be able to get them. Eating them is risky enough, as evidenced by the fact that the folks who made me the best latkes have all passed on.

Getting yourself invited to the home of someone whose ancestors came over on the Ellis Island is your best bet. Although, granted, I have been to parties at kosher homes, at which the noodle kugles were topped with cornflakes, having been made by the imported nanny earlier that day. Is nothing sacred in the revolutionary, tradition hating West anymore?! In the words/lyrics of Jim Hammerstein, son of Oscar, from his tune "Delicatessen:"

"Have you ever had matzoh ball soup on the Loop?
Its taste is both foul and acidic.
Go try chicken liver beyond the Hudson River
It's absolutely Anti-Semitic!"

Forgive my rant. I'm a new agey kind of gal, but some things are better kept "old school." So this Chanukah, let's "keep it real" and make our latkes at home as a celebration of the Old World ways. And let's not get carried away with extravagant gift giving either – I'm sure they didn't do that in the shtietel. Instead, as my gift to you, here's our mother's mother's recipe for the quintessential, Eastern European potato pancake for two, lovingly scribed on greasy pink paper by my sister Norma. Happy Chanukah!

Did You Know They’re Jewish?
Scientific Curiosity and the Divine Encounter
Mind Over Milkshakes
Love the Convert
Comments
MOST POPULAR IN Jewlarious
Our privacy policy
Aish.com Is Looking for Great Writers