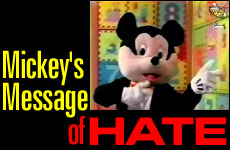 Hamas' Mickey Mouse teaches kids to hate and kill, and contrary to initial reports, it's still on the air.

Hamas TV has a new children's show which features a Mickey Mouse look-alike. But this Mickey does not romp about with Pluto, he teaches his young viewers to fight the "Zionist Occupation" and dream of a world dominated by Islam.

The show, called "Tomorrow's Pioneers", features a giant black-and-white Mickey Mouse-like character, called "farfour," or butterfly in Arabic. The program made headlines worldwide because the character has preached against Israel and the US and praised armed resistance.

According to Palestinian Media Watch , "using a character based on an appealing, world-famous and beloved icon like Mickey Mouse to teach Islamic supremacy and resistance as Islamic duty is a powerful and effective way to indoctrinate children."

The program encourages participation by child viewers, who phone in to the show and recite poems with images of hate and violence; for example, "We will destroy the chair of the despots, so they will taste the flame of death," and, in another poem, "Rafah sings ‘Oh, oh.' Its answer is an AK-47. We who do not know fear, we are the predators of the forest."

According to AP, Palestinian Information Minister Mustafa Barghouti, an independent, said Wednesday that the show reflects a "mistaken approach" to the Palestinian struggle for independence and would be suspended immediately, to allow for a review.

But on Friday, Barghouti would only say the station had promised to correct any problems.

The station's manager, Hazem al-Sharawi, said the show has an educational message and will not be canceled. On Friday, the lead character said he cheated in his exams because "the Jews destroyed my house," and he lost his books under the rubble. Children called in telling him his behavior was un-Islamic.

Also during the show, the adult presenter and the station manager, al-Sharawi, told viewers that once Islam rules, its message of "good and peace" will also rule.

Click here to watch selections of the show, courtesy of Palestinian Media Watch.

My Friend Taki Has Gone Too Far

2003 Dishonest Reporting "Award"
Were Adam and Eve Jewish?
How I Learned to Love the Multiverse
10 Big Jewish Inventions
Comments