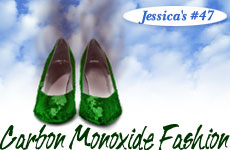 Jessica's world is beginning to cave in. Will Marc be there to save her?

He arrived after a meeting he had downtown, and the secretary, our new segment editor, and Ian, my assistant producer, had all given me some sort of surreptitious thumbs-up as we walked through the small office.

I was a little embarrassed by their fussing -- and a bit annoyed at Marc, for causing the fuss.

"Maaarc," I had whined once I got him away from their prying eyes into my office, "did you have to make it so obvious ?"

After a few more weeks of dating, I was still ambivalent toward him. When I was with him, I had fun, but something ineffable just hadn't yet clicked.

Marc seemed a bit hurt by my whine but was polite nonetheless. "I should apologize anyway," he said, "for dropping in on you with so little notice in the middle of the day. "

He looked at me blankly.

"To the Israel solidarity rally..." I reminded.

I had told him about it, but he'd apparently forgotten. I was doubly glad he came, though, because he'd interrupted what was about to become a very unpleasant meeting. I had (perhaps impulsively) nixed a segment of an upcoming show that Ian had put together.

It was based on a fashion ad campaign that features glassy-eyed women.

From the time I first saw it a year or two ago, it stirred something in me. It was more than just heroin chic. These women looked dead. And they were selling shoes.

We rarely do shoots of our own, but Ian had been hungry to get creative, so I'd let him. And now I saw that he'd basically reproduced the ad's look for a series on Back to School fashions!

These women looked dead. And they were selling shoes.

Ian had emaciated 12-year-olds made up like corpses wearing clothes that some fashion editor in New York had decided were the new Ivy League look.

"I am not exactly sure what you're objecting to," Ian sputtered when my disgust became evident. "These are the clothes..."

I nodded, trying to collect my thoughts. What was horrifying me? The clothes themselves? The styling? Or the fact that the segment looked like it had been filmed in a room filled with carbon monoxide?

"Well, of course they do. That's the whole point!" he said emphatically, remarking on the bold styling and reiterating his praise of the "beauty of rawness."

I remembered the first ad in what I considered to be the series, one from years ago. In it, a woman has apparently fallen down the steps, and lies backwards, staring vacantly at the sky.

How did she fall down the steps, you are forced to wonder? Maybe she was pushed?

I am about to send this out to an audience of teenaged girls.

These are violent images, I thought, and this is what is selling couture dresses. This is what is packaged as "beauty." And I am about to send it out to an audience of several hundred thousand -- most of them teenage girls.

Ian didn't seem ready to believe that I was going to scrap the series, and I wasn't sure I could either. He was starting to get upset when Marc wandered in and headed off Ian's incipient hissy fit.

Back in my office, I showed Marc some stills. He shuffled through them aimlessly.

"Well, for whatever it's worth," he said, "I don't find them particularly attractive."

I laughed. I gathered my things, went and told Ian that I would make a decision about the segments next week, and left with Marc. We drove through the skanky neighborhoods toward the capitol. I was surprised to see that a group of Palestinian students from Arizona State had come to counter-protest at the Israel rally.

I was particularly captivated by a woman who'd just returned from visiting her daughter in Israel.

"We are all under attack," the perky little woman had cried into the microphone, "An attack on Tel Aviv is an attack on all of us -- and it's up to us to fight back!"

She gave a list of organizations to support and people to write to and ended her speech with a fiery, "Am Yisrael Chai!"

You don't really think one person can make a difference, do you?

Marc rolled his eyes when I started clapping enthusiastically.

"A little melodramatic, don't you think?" he asked.

"No," I said. "Theatrical maybe, but what's melodramatic?"

"Oh c'mon," he rejoined with a half-grin, "you don't really think any of the stuff she said really matters?"

We ended up sitting on the lawn in front of the state house, the Palestinians chanting behind us, discussing whether one person could really make a difference.

"Marc," I said, speaking as soon as the thought came into my head, "Do you really think that one person can't make a difference? Or maybe you just don't care..."

"Not really," he shrugged. "I have enough things I need to worry about in my own life. I just don't think one person makes so much of a difference that it's worth it."

"But what about doing something if only because you couldn't live with yourself if you didn't?"

"Look," he said, "I can secure funding for my company's new projects... I can't save Israel."

Another speaker began, cutting off the conversation.

I listened with one ear, while continuing to think about our conversation.

"It's like you're content with things the way they are," I told Marc later, trying to figure out why his words bothered me so much.

"What, you want me to be the Che Guevara of the Jews?" he laughed.

I shook my head. It wasn't an issue of political activism -- it was a matter of reaching beyond one's comfort level. Of striving for something great, something profound, meaningful, umm... transcendent?

He leaned back in the grass and smirked. "This discussion is a bit too heavy for me right now."

What, you want me to be the Che Guevara of the Jews?

On Sunday, Ellen called and to ask how it was going with Marc and whether I'd found a synonym for "misogynist" yet.

"Misandry," I'd discovered from a few little birds. On the former, I just wasn't sure.

It was funny, she said, she'd been dating her new guy for months longer than Marc and I had been, but it seemed like we knew each other so much better. I told her about Coach Rina and her targeted conversations.

"I guess she's right. You can hang out forever without really getting past the superficial," Ellen said. "You're keeping each other company and passing the time, but it's not doing anything to solve the real loneliness you feel or to move forward in your life."

Moving forward, I realized, means you have to take risks. You have to know what you ultimately want out of life and be fearless about expressing it.

You have to know what you want and be fearless about expressing it.

You also have to be ready follow up on it – meaning that you have to be willing to put yourself on the line and do something about it. And, if you're focused on moving your life forward, you have to see the fruitlessness of remaining in a relationship with someone who doesn't share those same ultimate goals -- no matter how much you like them.

The first step, Ellen opined, is achieving real clarity about what your own needs and goals are.

The next morning at work, I was preoccupied with these thoughts, but snapped into reality when I opened an e-mail from the publisher's assistant in New York congratulating me on the brilliant Back to School segment.

--What?! I looked closer. I hadn't yet told Ian that I'd decided not to run the vile thing he'd produced, but I certainly hadn't sent anything to New York.

But somehow, it had gotten there.

Then I realized -- Ian had gone over my head.

He was backing me into a corner.

My instincts raced. What should I do? Let it slide? Or put up a fight?

Jessica #5 - Membership Drive to My Heart

Jessica #59 - Pieces of the Puzzle
Don’t Believe in Other Gods Versus God is One
Seeing Without Eyes
Why Shouldn’t We Eat Whatever We Want?
Comments
MOST POPULAR IN Dating
Our privacy policy
Aish.com Is Looking for Great Writers