Every Soldier a Hero 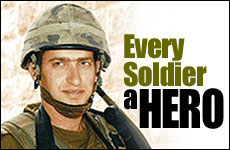 The inspiring story of the hero of the Merkaz Harav massacre.

On March 6, 2008 at 8:36 PM, 29-year-old Israeli Paratrooper Major David Shapira had just finished giving his two young children a bath and putting them to bed when he heard an explosion.

At first Shapira thought he was hearing firecrackers of children getting an early start on their Purim celebrations. But when Shapira opened his window and heard screaming accompanied by more explosions, he realized there had been a terror attack. He grabbed his gun and ran across the street to the Merkaz Harav Yeshiva, where he had been a student for many years.

What followed were among the most dramatic moments of Shapira's life.

Shapira asked the policeman guarding the yeshiva's entrance if he knew where the terrorist was located. The policeman told Shapira what he knew, and advised him to put on the bulletproof vest in his police car before entering the yeshiva. But Shapira heard the constant firing from the terrorist's Kalashnikov and the young students screaming for help. There was no time for precautions -- every moment of delay could mean more murdered children.

Five minutes later Shapira had found and killed the terrorist in the yeshiva's library. Eight young students were murdered, filling their holy books with their own blood.

The selfless bravery of Shapira, as well as yeshiva student Rabbi Yitzchak Dadon, had saved the lives of hundreds of students who were at the yeshiva that night.

Afterwards, for personal reasons and on account of his humility, Shapira refused all requests for interviews. But this past Chanukah, as part of an annual festival saluting the contribution of Israeli soldiers, Shapira agreed to his very first interview to share his incredible story.

When interviewer Ilana Dayan from Israeli Army Radio asked Shapira if there was any connection between his heroism on that terrible night and the yarmulke on his head, Shapira nodded.

"It's clear," he explained, "that God is in control of everything. Everyone has a mission in the world. [Risking my life to kill the terrorist] was my mission from God at that moment."

After shooting the terrorist, Shapira continued inspecting the rest of the yeshiva in case there was another terrorist in hiding. Next to the library he came across a locked classroom with 15 students still barricaded inside. When Shapiro knocked on the door, the students were terrified to open the door.

In order to identify himself, Shapira recalls with emotion, "They asked me to recite the 'Shema' to prove that I was a Jew."

Interviewer: "So after they asked you, did you say Shema Yisrael?"

Shapira: "At every single moment, when I was running there and entering the yeshiva, these were the words that were running through my head: "Shema Yisrael Hashem Elokaynu Hashem Echad..."

"I knew these might be my last moments alive. But I also knew that this was what I had to do."

Shapira continued: "And that night, as I ran into the yeshiva, I also understood what it means to love God with all your soul... I knew these might be my last moments alive. But I also knew that this was what I had to do."

Our Soldiers in Gaza

After 15 years in my homeland, my love for Israel still grows by the day. I love living here. I love being the mother of Israeli children. And I love knowing that if my ancestors, who prayed every day to return to Zion during the cruel centuries of exile, could see me today they would look at me with tears of wonder welling up in their eyes.

And I know that none of this would be possible if not for the self-sacrifice of Israel's soldiers. Soldiers like David Shapira.

When I was 18 years old in my sophomore year of college, my greatest worries were about my GPA and what country to select for my junior year abroad. At that same age, Israeli teenagers are setting aside several years to serve their country, not knowing if they will survive that service to celebrate their 20th birthday.

Over 22,000 of these young Israelis have lost their lives fighting so that you and I and every Jew in the world will always have the ability to fulfill the yearning of countless generations.

The headlines tell us "The Israeli Army is at war in Gaza." But we cannot let ourselves forget that an army is made up of soldiers. Soldiers who at the moment of truth have said, "I know this might be my last moment alive. But I know that this is what I have to do."

Every Israeli soldier is a brother, a father, a son.

And in my eyes, every Israeli soldier fighting today is, like David Shapira, a hero.

Please pray for the safety of Israel's soldiers.

Going Up to Israel
It Takes A Lot Of Faith To Be An Atheist
How Instagram Brought Back This Nostalgic Soup
What Makes Eli Run?
Comments