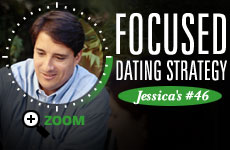 Coach Rina is trying to help Jess pin down the missing element.

"Maybe I'm just comparing him to Rick too much," I shrugged, handing another shirt into Rina's dressing room.

Rina and I were in a semi-hidden nook at the Dillard's Clearance Center in Chris-Town Mall. Steve had insisted I spirit her away for an Adult Women's Social Interaction Evening. (We'd rejected the term "Girls' Night Out" as entirely too prehistoric.) After meeting with little shopping success, she'd gotten Steve to commit to another AWSIE -- this one on Thursday afternoon. (We should all marry professors!) I was going to take off early from work so we could hit the outlet center north of Phoenix.

Sometimes I envied Rina enormously. She has a great husband, great kids -- so much of what I think I want. But I knew she also has next to no time to herself, at least not compared to me. This shopping expedition was a big thrill for her, I knew, not only because it was relaxing, but because she said she was sick of owning nothing but washable cotton. Sometimes, I knew, she envied me my freedom and independence -- and my ability to wear clothes that are dry-clean-only.

She handed back the stupidly trendy camouflage skirt we'd rejected and pointed out that Mellifluous Marc and I had only gone out a few times.

I have freedom -- and the ability to wear dry-clean-only clothes.

I sighed. Dating after a significant relationship is always tricky. You're accustomed to a level of ease that came only after months of getting to know each other. Then that's gone, and in its place is some fairly attractive stranger sitting across a table looking at you expectantly, waiting for you to reveal yourself.

Perhaps we should just start all relationships on the third date -- it's already established that you're interested and then you could skip the tired rehashing of anecdotes and personal histories. After all, don't we all tell the same six or eight first-date stories? We've told them a million times, but they're new to the stranger across the table -- so we have to feign interest in our own anecdotes.

I shrugged. My feelings about Marc were weird. I had been right initially: he's smart, funny and nice. Also good-looking, well-informed, treats me well. And even has good table manners.

"Really, our first date was great. And the second was even better. In fact, they've all been fine. Fine," I said with emphasis. "I don't think it's the getting-to-know-you thing..."

We have to feign interest in our own stories.

Marc and I had had a lunch date, two dinner dates, watched a movie and gone biking. That had turned out to be a very ill-advised expedition. Marc had thought the weather would be cool enough if we waited until the sun went down, but I thought that biking through Scottsdale's green belt at 95 degrees was nearly as miserable as doing it in the 109-degree sun. He chided me that I'd better work on becoming a better Southwesterner. I replied that I was happy with air conditioning and a stationary bike, thank you very much.

During this time, I'd been dutifully following Coach Rina's counsel and working hard to keep our dates focused on actually getting to know one another. She had made me plan out one serious thing to discuss during each date, a probing question at a deep level. We could chatter as much as we wanted, per her rules, as long as this item was discussed.

Her theory is that we could easily get to know each other superficially -- and would -- if we just took it easy and enjoyed other's company. But my task, according to La Coach, was to find out if Marc and I had similar goals and values.

Coach Rina had me planning out one serious thing to discuss each date.

It was as if, in the middle of every date, Rina's face would appear floating above Marc's head. "This is about whether you want to build your life with him, Jess..." would come the disembodied voice. "Keep your focus. Focus, Shaeffer, focus!"

It was as if Pat Riley and Disney mode Angela Lansbury had melded.

Initially, I'd resisted. The whole thing seemed scripted and awkward, but after a few weeks of dating, I had to admit that her theory was working, and I was starting to get a fairly good picture of who he was.

Maybe that was the problem.

I was enjoying Marc, sure, but something wasn't clicking with him.

"Rina," I ventured, tentatively, "maybe it's this coaching stuff. Maybe I am taking this all so seriously that I can't enjoy him."

She poked her head out of the dressing stall.

"You really think so?" she asked, puzzled. "Because you've said that you feel like you're getting to know him on a deeper level than you normally would. I think that would be a good thing."

"I don't know. I like Marc, but something is just missing."

The next time I saw him, I decided to take it a little easier.

Why is there no male equivalent of ‘misogyny'?

Marc took me for dinner in north Scottsdale, where we ran into Ellen and a guy she recently started dating. We sat shmoozing and I somehow ended up going off on a rant about my philosophical issue du jour: How peculiar is it that a word exists to describe a pathological dislike of the female gender ("misogyny") but no such word exists for male loathing?

I shook my head. That refers to a pathological dislike of all humans, not just the male kind.

"No, it doesn't cut it as an analogous descriptive, but it may be the closest parallel," I said, amused myself at how seriously I was taking this. "It's far too unsophisticated. The hyphen helps, but it sounds more trailer park than Ivory Tower."

"And what is this all supposed to mean?" Ellen queried.

I ended up telling them how I'd become frustrated at work after typing in the supers for a runway segment. The superscript was to read: "Black: The ‘new' New Black."

"I actually wrote that," I said lightly. "And my bosses will like it. And there will be people who read about it in the magazine and take it seriously."

Somehow, these dumb things -- whether on the show or in the magazine -- actually dictate what colors we "like." Somehow, my feelings had actually changed about acid orange and coral -- because they're hip colors now.

"Some designer had an inspiration and now we all have to wear the colors of my grandmother's lawn furniture," Ellen added.

On the way home, I mused about female self-loathing. And Rina's washable clothes. And the television program I worked for. And the magazine it promoted. And misogyny.

I was bothered by it all, and realized that I was caught in a world where beauty aids and entertainment and "getting ahead" reigned supreme. "What's this all supposed to add up to," I pleaded to myself aloud.

Marc seemed to be listening.

"I think you should feel really great about where you've gotten to," he said, telling me about a cousin of his who'd labored to get entry to the magazine world and found all doors closed to her. "You are a real success story. Maybe your magazine isn't The New Republic, but you've got a great job and an impressive New Media resume only a few years into your career. You don't have to wear orange."

I looked over at his handsome profile. He clearly had listened to what I was saying. But something dawned on me: I wasn't sure he'd really heard a word I said.

Jessica #1 - Quest for the Sparkling Ring