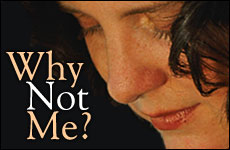 Yes, I too long for a child of my own to hold, but who am I to challenge God and ask 'Why me?'

There once was an eight-year-old boy who was battling cancer. After a particularly grueling day of treatment, his mother, exhausted and devastated by what her little boy was being subjected to, turned to him and apologized. She said, "I'm so sorry for what you are going through. I wish you didn't have to deal with this pain. I pray about it all the time, but sometimes all I can do is ask God, 'Why me?'"

And her little boy, with a wisdom beyond his years, looked at her and said, "And God parts the clouds, looks down at you and says, 'Why not you?'"

As a married woman who hasn't yet been blessed with children of my own, when I see the word 'infertility', I take a second glance. Many of the articles I've read about women who are dealing with infertility don't offer much hope or encouragement, or a direction for how to be happy with what I have. In between the lines I often hear the attitude of 'Why me?' and I feel like replying with 'Why not me?' God has a definite plan for when I will have children, just like he had a plan for when I was born, whom I was born to and whom I married. Who am I to challenge God and ask 'Why me?'

Yes, I too long for a child of my own to hold, but that has obviously not been God's will, so I'll hold my friend's child for now. Yes, I too have watched my brother and sister-in-law, who got married two weeks before me, have their second child, and my brother and sister-in-law who got married six months after me have their first child. As a matter of fact, I'm the only one of my married siblings (and there are seven of us) who hasn't had a child since the time I got married. All of my friends have at least one child, most of them have two and my best friend is pregnant with her fourth.

How can we deal with all of this? The pain is undeniable, but how can we keep it in context and maintain a positive perspective?

How would it help me to avoid women who are pregnant or have young children?

The first thing we can do is thank God for all that our friends' and families have. God giving them children in no way affects His ability to give me children, so why would I begrudge them the beautiful children they have? How would it help me to avoid women who are pregnant or have young children? Aside from the fact that I'd seriously be limiting my social circles to women my mother's age, I'd also destroy so many relationships that have taken years to build and miss out on many new ones.

The second thing we can do is to remind ourselves that we haven't done anything to put ourselves in this situation. This is God's will and there is no need to blame myself (or anyone else for that matter) or pity myself. By pitying myself I will only cause others to look at me with pity. Nothing will be solved and nothing will be gained.

Then we can go on to thank God for all He has given us. I am happily married to a wonderful, supportive husband. I have a good job and enjoy getting up every day to go to work. I have a family that I am very close to and friends that I value talking to. There is so much I can do with my life until the time that God does decide I am to have children. I have adorable nieces and nephews that I love to talk to, spend time with and buy things for.

When I was a teenager I read an excellent book Full Circle, written under a pseudonym, by a religious woman detailing her experience with infertility. As an only child of Holocaust survivors, her one dream was to have as many children as possible to replace her mother's siblings who were brutally murdered in the war.

Once a happy, popular girl, she quickly got worn down by the years of dealing with infertility. She started avoiding her family, her friends, her neighbors and anyone and everyone who represented happy motherhood. She started hearing innuendos in everyone's simple questions, always sure that they were somehow making a reference to the fact that she doesn't have children.

She was lucky enough to have an extremely supportive husband, who softly and gently pointed out to her that she is not only torturing herself, but also him and everyone else around her. He encouraged her and together they decided to go to a specific rabbi and ask him how to deal with their situation and to ask him for a blessing that she should have a child. This rabbi gave her one piece of advice: she should find a way to involve herself with helping other people with their children, and through that, God willing, she would merit having children of her own.

Considering the pain she felt looking at other people's children, this was not an easy piece of advice to follow. Eventually, she came up with a plan. She would offer her services to mothers who need someone to watch their children when they go to the hospital to have their next child.

Her first time taking care of another woman's children was intensely painful; her grief was very real. As she spent more time with other people's children her pain lessened. Although she didn't discover that she was pregnant two weeks later, she did find herself happy and relaxed for the first time in years. While God had not given her the blessing of enjoying her own children, she realized there was no need to further restrict herself by not enjoying other people's children.

After another few years, she was indeed blessed with a child of her own.

Although I never thought I'd be dealing with the same issues as this woman, I cried when I read her story. Dealing with infertility gave her the option to sink into self-pity and depression, but it also gave her the opportunity to rise above it.

That means looking at our friends and family and realizing that they're not always going to have the perfect thing to say to us, and that they are not being malicious in any sense. They want our dreams to come true almost as badly as we do. When my husband's aunt told me, "Please God, soon by you," after telling me that her daughter just gave birth after 11 months of marriage, I realized that she sincerely meant it and said, "Amen." When she compared me to the Matriarchs Sarah, Rivka and Rachel and said that God was just waiting for their prayers, I appreciated her thoughtfulness and felt like the Matriarchs were accompanying me on this part of my journey and adding their prayers to my own.

We have to understand that when a stranger asks us if we have any children they are not intentionally hurting our feelings. They're just making conversation. They could just as easily have asked someone where her husband works, not knowing that her husband has been unsuccessfully looking for a job for years. They could just as easily have asked someone where their children go to school, not knowing that just three weeks ago they lost a child. A comment that may be hurtful to me may be a comfort to someone else who is going through a similar challenge. People generally try their best; let's not fault them for not knowing precisely what would make us feel better.

A couple, affectionately known by many as Uncle Robert and Tante Ruth Krane, were never blessed with children of their own. Uncle Robert lived to the age of 90, Tante Ruth lived to the age of 99 and they were happily married for approximately 70 years. Most couples can't fathom living through the next ten years without having a child of our own; the thought of 70 years would blow our minds.

But no one ever heard a word of complaint from Uncle Robert and Tante Ruth. Although God decided that they would not have children of their own, they lived their lives with so much grace and kindliness that there are hundreds of people, adults and children, who treated them as they would their own parents.

The only time anyone heard Tante Ruth discussing her childlessness was when she said that God did not give her children of her own so she would reach out to other people's children. Instead of thinking Why Me?, she thought, Why not me. She and Uncle Robert took this message to heart and reached out to many people -- emotionally, spiritually, and financially, filling their days with helping others. Every baby that was born received a blanket hand knit by Tante Ruth. Each child who visited their home got a bag of Tante Ruth's homemade cookies and some M and M's. Before we left to camp or school, Uncle Robert would slip us $20 or $50 for spending money.

As the children grew into adults, Uncle Robert and Tante Ruth attended all their simchas, celebrations. Their house was full of albums of other people's children. By giving so selflessly for so many years, they had more children than they ever could have given birth to physically, taking care of them in their older years.

So take some time to spend with the children in your life, whether they are your nieces and nephews, cousins, or friends' children. Show yourself and everyone around you that you can continue to love children until God is ready to bless you with your own. Befriend a poor family and give their children the love, joy and comforts of life that you long to give your own children. You will bring happiness to children that are presently in your life - and have children bring happiness to your life.

Confessions of an SJF
Vayelech 5783: Regret and Repent
Rabbi Sacks: Focus On the Important, Not the Urgent
Put Your Foot Down: Are Human Feet Poorly Designed?
Comments
MOST POPULAR IN Current Issues
Our privacy policy
Aish.com Is Looking for Great Writers