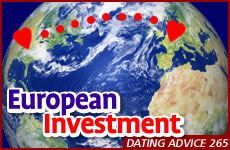 Easy international travel and communication increases the chances of a long-distance courtship.

About six months ago, I was traveling in Europe and met a wonderful man. We have a lot in common and clicked right away. We spent a lot of time together during the few weeks I was there, and then we decided to try the long distance thing. We started talking about distance issues from the very beginning of our dating. Both of us are dating for marriage, and wanted to see if our initial connection could develop in that direction. Since then, we speak almost every day, and he came to visit me for a few weeks.

I am crazy about him, but I am getting tired of being so far apart. The longer we are not living in the same city, the longer it will take us to decide our future and get married, and frankly I am not getting any younger and just want us to be able to be together already.

To help move this along, we've decided to live in the same city for a few months and spend a lot more time together. Currently, I wouldn't be able to work in his city because of certain restrictions on foreign professionals, but I could live about two hours away and we would see each other on weekends.

He hopes that I will love it in Europe and will choose to stay.

While I am willing to live in his European country for a period of time, I ultimately would want to live in the U.S. He expressed his willingness to relocate, but he is anticipating a work contract that would require him to stay in his home country for up to three years. Both of us decided that these were possibilities we could live with, and that's one of the reasons we have continued to see each other.

If we do decide to marry, our marriage will probably coincide with the time he begins his contract. I'm worried about that perhaps the time frame will continue to grow and it will take a long time before we can settle down in a permanent community. I'm also worried that there is a small part of him that hopes I will love it in Europe and will choose to stay. But that is just not going to happen.

I also worry that when we do move to the U.S. he won't like it, or will miss his family and friends too much.

I care deeply for this man and have never connected this way with anyone before. So while I'm planning to make the move, I have a lot of concerns. Sometimes I feel our situation is too complicated, and requires more compromise on both our parts than most relationships do. How much compromise is too much, and what is your advice for me?

We see more and more couples grappling with the complications of long-distance dating. Easy travel and Skype allow two people from different parts of the planet to meet and continue a courtship without living in the same city.

As in your case, a couple typically goes on a few dates when one of them is visiting a distant location. They connect to each other and decide that they would like to see if things can develop further. They communicate by phone, e-mail, and Internet chats -- and arrange for one of them to visit the other's city for more face-to-face dating. When the visitor has to return home, the couple continues to call and e-mail, but they miss each other and realize that they need more face-to-face meetings to really know if they are right for each other.

Some long-distance courtships that begin this way don't progress much further. It's too difficult to go months without seeing each other and then catching a few fleeting days together. Unless the couple is dating with an intense focus to find out if they are right for each other to marry, the distance can be impossible to traverse for more than two or three visiting "cycles."

Fortunately, you and this man understood from the very beginning that if you were to go on more than a date or two, you'd have to address the issue of relocation very early in the dating process. (That's a recommendation we make to every couple in a similar situation. If neither partner can consider relocating, they shouldn't begin to date.) You were clear that you could see yourself moving to another country temporarily, but ultimately wanted to live in the U.S., and he expressed a willingness to set down roots in America, as long as he could first pursue a work contract that is very important to him. You both displayed flexibility, a quality that is very important in a marriage, and your flexibility is one of the reasons your long-distance courtship continues to move forward.

Your willingness to accommodate each other says something about your priorities.

Your willingness to accommodate each other also says something about your priorities. It says, "Marriage is important enough to me that I would move to another country, and perhaps go off track for a while with my career, if I found the right person." Not everyone can say this, or can understand that certain compromises and accommodations are really investments that pay tremendous dividends.

You seem to be telling us that the first of these investments comes easy to you. You view moving across the world for several months, unsettling yourself and then settling in, incurring expenses, and even living two hours apart as a worthwhile investment. It will allow you to see each other in more day-to-day situations, to develop a shared history, and to gain clarity about the future of your relationship. A few months in exchange for what could be a rewarding lifetime together seems to you a pretty good investment. In addition, because you feel optimistic that there is a good chance things will work out, you're willing to take the risk.

But now you're worried that things may shlepp out too long in Europe. So here's our suggestion:
Why not view the next stage as an investment, too? If you stay in Europe for another one to three years, it will be because you and this man decide to marry. Instead of worrying about the amount of time in Europe, can you tell yourself that any of these time frames would be worthwhile investment for a married person to make? Don't other married people make these investments, such as when they relocate so one of them can attend graduate school, work at an internship, or give emotional support to a family member in crisis?

It may be that you'll have to make a significant career adjustment during this time, but this is something married people often choose to do as part of their investment. Making an accommodation so that the man you love can pursue a job opportunity he's worked to achieve will greatly contribute to your relationship's "emotional bank account" (as well as your husband's career and your actual bank account), and can also benefit you personally in many ways. You'll have an opportunity to become immersed in another culture, take advantage of natural sights and cultural attractions you don't have in the U.S., and forge communal ties and personal friendships that can continue after you return "home," thanks to the same technology and inexpensive world travel that enables you to date someone half a world away. And in our global economy, your work in Europe might also turn out to be an advantage for you professionally.

So, even though you worry that two years can be a long time to delay putting down roots, if you change your perspective you can view this next stage as an investment that will yield other important benefits.

Your concern that the man you are dating may secretly hope you'll stay in Europe is something you can clarify in an honest, heart-to-heart talk. But whether or not he'll like the U.S. is something that no one can predict. In fact, couple's can't even foresee if they're going to like the new neighborhood they move to, the job they accept, or the synagogue they join. This is regardless of whether their move involves a few blocks or thousands of miles. However, the fact that you are both flexible, and that each of you is willing to make some major accommodations for the sake of your potential partnership, leaves us to believe that you will be able to adjust you plans when necessary so that things can work out. And ultimately, these are the valuable qualities for two people leading down the road to marriage.

Dating Maze #260 - Warm-up Exercise
Vayelech 5783: Regret and Repent
Rabbi Sacks: Focus On the Important, Not the Urgent
Put Your Foot Down: Are Human Feet Poorly Designed?
Comments
MOST POPULAR IN Dating
Our privacy policy
Aish.com Is Looking for Great Writers