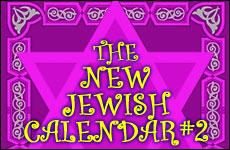 Last week I did a bissel ranting about "our" times of the year that should be acknowledged, appreciated, and celebrated by the world at large – and aren't. As a calendar maven (A Little Joy, A Little Oy, The 10, 2010), how could we Jews not have at least one National Holiday – honoring – us! OK, some of our religious holidays are given a "mention." In March for example, it's Purim and Ta'Anit Esther. But March 18th is also Forgive Mom and Dad Day, right after National Cheerleading Week (March 2-8). "Us?" Not so much. Then there's Saint Piran's Day (the 5th), St. Urho's Day (the 16th), St. Patrick's Day (the 17th). Even the the Athabascan Indians of Alaska get a week to do their Stickdance, and the Navajos, their Mountain Chant (in Arizona).

The secular calendar could use a "Yiddle" more representation.

As you can see, I think the secular calendar could use a "Yiddle" more representation. With that in mind, here are my picks for five more National Jewish holidays:

*National Jewish I Couldn't Agree More Week: Your pregnant daughter, like her friends, the Meshugensterns, informs you she's trying a "water birth" in a lake, surrounded by nature – The Grand Canyon. "Ai, ai, ai!" you say excitedly. "Darling, I couldn't agree more!" This you repeat for a whole week from your bed in Mt. Sinai where they're checking the palpitations – until it ends – on April Fool's Day.
AND SPEAKING OF .........

*National Chutzpah Day: April Fool's Day? Feh! What ... ? We need more chazzers and chalerias in the world? There aren't enough shnooks, nudniks, and shmendriks? We're short shnooks, shmendriks, shlimazels, shmeggeges, and shlemiels? They need a holiday? We need a holiday – from them. Which brings me to my proposal. On April 1st, we replace April Fool's Day, with National Chutzpah Day! Yes. Right after I Couldn't Agree More Week, we can open a mouth. To our daughter with the water birth? We can now not only geshrei, but mix in: "Are you meshugge? I've set you up with Dr. Feldstein, the Best, at Beth Israel. And the Nanny will be there by the time the epidural wears off.

*National Community College is Nice too, Week: For one week in April, (Community College Month), all Jewish people will consider, and, yes, donate to ... their community college of choice. During this period, we won't mention, or hock about any a) Ivy League Universities; b) Four-year schools. That means no "I'm a Future Harvard Mom" bumper stickers, hats, T-shirts, mugs when your 5-year-old enters Day School. During this special week, high school seniors will apply to at least one non-four-year college (OK, as their "safe" school). This new ritual shall be accompanied by special klezmer song in honor of Dustin Hoffman, Joan Lunden, Arthur Goldberg, and Billy Crystal ... all of whom were launched by a community college – and made a nice living.

National Jewish Satisfaction Day: Celebrated the day after Chanukah, all is "hunkey-dorey" by you. Contrary to the old stereotype, "Is anything OK?" everything will be OK (well, better). Starting now, we'll all practice the difficult art of the "counter-kvetch flip" – to be ready.
Example:


Make the counter-kvetch your ringtone ... so every person will know how satisfied you are. For example: "I want you should hear what a mechaya my life is – if this cheap phone my son-in-law got me works."

*Let it Go, Let it Go, Let it Go Week: Falling on the first day of winter, for a whole week, we put away our spectacles, scissors, sewing baskets, thermometers, barometers, Cheer, tissues, and shmutz detectors. Because, on this day, we "let our people go – out." However. Our mates' socks -- one black, one brown? Big deal. Our son departs without a jacket? It's Indian Autumn. The lights and rap music on high? You "enjoy it," too. A Debra Winger film festival you want to see at six? What ... ? They can't defrost? Your daughter has a hem hanging? She'll notice – when she trips on it. Underwear a little ripe? Inside out is nice. Should these attempts trigger acid reflux, let our inner Jew recite "Luz Mich Tsu Ru! (Leave Me Alone)" as you make a list of "Me" time, citing all those things you've been shtarbing to do instead of saying, "Run, bring me the scissors!"

If you've been chaloshing to commemorate, plotzing to praise, bursting to break out the Manischewitz, by all means, post a comment with you own suggestions! Remember, everybody's entitled to have their day ... no matter how ... meshugge.

How to Make Chanukah Religious Again

Guide to the Hungry and Perplexed

UN on China and Burmese Crises: Israel's Fault
What Makes Eli Run?
The Tyranny of Materialism
Science Enters the Mysterious Inner World of Consciousness
Comments
MOST POPULAR IN Jewlarious
Our privacy policy