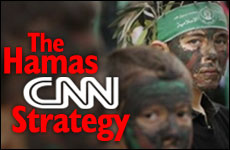 Don't play into the deadly, cynical ploy of Hamas and blame Israel.

As Israel persists in its military efforts -- by ground, air and sea -- to protect its citizens from deadly Hamas rockets, and as protests against Israel increase around the world, the success of the abominable Hamas double war crime strategy becomes evident. The strategy is as simple as it is cynical: provoke Israel by playing Russian roulette with its children, firing rockets at kindergartens, playgrounds and hospitals;
hide behind its own civilians when firing at Israeli civilians
; refuse to build bunkers for its own civilians; have the TV cameras ready to transmit every image of dead Palestinians, especially children; exaggerate the number of civilians killed by including as "children" Hamas fighters who are 16 or 17 years old and as "women," female terrorists.

Hamas itself has a name for this. They call it "the CNN strategy" (this is not to criticize CNN or any other objective news source for doing its job; it is to criticize Hamas for exploiting the freedom of press which it forbids in Gaza). The CNN strategy is working because decent people all over the world are naturally sickened by images of dead and injured children. When they see such images repeatedly flashed across TV screens, they tend to react emotionally. Rather than asking why these children are dying and who is to blame for putting them in harms way, the average viewer, regardless of their political or ideological perspective, wants to see the killing stopped. They blame those whose weapons directly caused the deaths, rather than those who provoked the violence by deliberately targeting civilians. They forget the usual rules of morality and law.

Every human shield that is killed by Israeli self defense measures is the responsibility of Hamas, but you wouldn't know that from watching the media coverage.

For example, when a murderer takes a hostage and fires from behind his human shield, and a policeman, in an effort to stop the shooting accidentally kills the hostage, the law of every country holds the hostage taker guilty of murder even though the policeman fired the fatal shot. The same is true of the law of war. The use of human shields, in the way Hamas uses the civilian population of Gaza, is a war crime -- as is its firing of rockets at Israeli civilians. Every human shield that is killed by Israeli self defense measures is the responsibility of Hamas, but you wouldn't know that from watching the media coverage.

The CNN strategy seems to work better, at least in some parts of the world, against Israel that it would against other nations. There are many more protests -- and fury -- directed against Israel when it inadvertently kills fewer than 100 civilians in a just war of self defense, than against Arab and Muslim nations and groups that deliberately kill far more civilians for no legitimate reason. It isn't the nature of the victims, since more Arabs and Muslim civilians are killed every day in Africa and the Mid East by Arab and Muslim governments and groups with little or no protests. (For example, on the first day of Israel's ground attack, approximately 30 Palestinians, almost all Hamas combatants, were killed. On the same day an Islamic suicide bomber blew herself up in a mosque in Iraq, killing 40 innocent Muslims. No protests. Little media coverage.)

It isn't the nature of the killings, since Israel goes to extraordinary lengths to avoid killing civilians -- if for no other reason than that it hurts their cause -- while Hamas does everything in its power to force Israel to kill Palestinian civilians by firing its missiles from densely populated civilian areas and refusing to build shelters for its civilians. It isn't the nature of the conflict, because Israel is fighting a limited war of self defense designed to protect its own civilians from rocket attacks, while most of those killed by Arabs and Muslims are killed in genocidal and tribal warfare with no legitimate aim. The world simply doesn't seem to care when Arabs and Muslims kill large numbers of other Arabs and Muslims, but a qualitatively different standard seems to apply when the Jewish state kills even a relatively small number of Muslims and Arabs in a war of self defense.

The international community doesn't even seem to care when Palestinian children are killed by rocket fire -- unless it is from Israeli rockets.

The international community doesn't even seem to care when Palestinian children are killed by rocket fire -- unless it is from Israeli rockets. The day before the recent outbreak, Hamas fired an anti-personnel rocket at Israeli civilians but the rocket fell short of its target and killed two Palestinian girls. Yet there was virtually no coverage and absolutely no protests against these "collateral" civilian deaths. Hamas refused to allow TV cameras to show these dead Palestinian children, who were killed by their own rockets. Nor have there been protests against the cold blooded murders by Hamas and its supporters of dozens of Palestinian civilians who allegedly "collaborated" withIsrael. Indeed Hamas and Fatah have killed far more Palestinian civilians over the past several years than have the Israeli, but you wouldn't know that from the media, the United Nations or protesters who focus selectively on only those deaths caused by Israeli military actions.

The protestors who fill the streets of London, Paris and San Francisco were nowhere to be seen when hundreds of Jewish children were murdered by Palestinian terrorists over the years.

Moreover, the number of civilians killed by Israel is almost always exaggerated. First, it widely assumed that if a victim is a "child" or a "woman", he or she is necessarily a civilian. Consider the following report in Thursday's NY Times: "Hospital officials in Gaza said that of the more than 390 people killed by Israeli fighter planes since Saturday, 38 were children and 25 women." Some of these children and women were certainly civilians but others were equally certainly combatants: Hamas often uses 14, 15, 16 and 17 year olds as well as women as terrorists. Israel is entitled, under international law, to treat these children and women as the combatants they have become. Hamas cannot, out of one side of its mouth, boast that it recruits children and women to become terrorists, and then, out of the other side of its mouth, complain when Israel takes them at their word. The media should look closely and critically at the number of claimed civilian victims before accepting self-serving and self-contradictory exaggerations.

By any objective count, the number of genuinely innocent civilians killed by the Israeli Air Force in Gaza is lower than the collateral deaths caused by any nation in a comparable situation. Hamas does everything in its power to provoke Israel into killing as many Palestinian civilians as possible, in order to generate condemnation against the Jewish state. They have gone so far as firing rockets from Palestinian schoolyards and hiding their terrorists in Palestinian maternity wards. Lest there be any doubt about the willingness of Hamas to expose their families to martyrdom, remember that the Hamas terrorist leader recently killed in an Israeli air attack sent his own son to be a suicide bomber and then refused to allow his family to leave their house even after learning that he and his house had been placed on the list of military targets.

Many of those who protest Israeli self-defense actions remain silent in the face of real genocides -- such as that in Darfur.

Nor is this double standard -- applied to Israel on the one hand, and Arab and Muslim nations and groups on the other hand -- limited to the current situation in Gaza. It has provided an excuse for the international community to remain silent in the face of massive human rights violations including genocides perpetrated by Arabs and Muslims around the world for years. Many of those who protest Israeli self-defense actions remain silent in the face of real genocides -- such as that in Darfur.

The reality is that the elected and de facto government of Gaza has declared war against Israel. Under Article 51 of the United Nations Charter, they have committed an "armed attack" against the Jewish state. The Hamas charter calls for Israel's total destruction. Under international law, Israel is entitled to take whatever military action is necessary to repel that attack and stop the rockets. It must seek to minimize civilian deaths consistent with the legitimate military goal, and it is doing precisely that, despite Hamas efforts to maximize civilian deaths on both sides.

The best outcome for purposes of producing peace would be the destruction or substantial weakening of Hamas, which rejects the two-state solution. Israel and the Palestinian Authority could then agree on a peace that would end both the Israeli occupation and the rocketing of Israeli civilians.