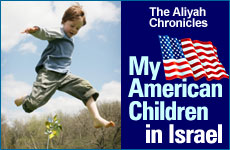 Moving to Israel has been a great lesson in parenting.

An ode to my children who are rushed off to school six mornings a week.

Who sit all day listening to a teacher and fellow students speak Hebrew without understanding a word. Who come home with a smile on their faces.

An ode to my children who don't have to smile, but could complain instead that they're lonely, that no one understands them. That school is a waste of time.

An ode to the children who make Aliyah, who struggle, and persevere.

I tell my six-year-old son to sit next to the other schoolboys at the bus stop while he waits for the bus. That he shouldn't separate himself from them by standing off to the side or turning his back. But every morning he gets out of the car, crosses the street to the bus stop, looking at the ground and sits separate from the Israeli boys. He kicks the dirt, looks at the sun and watches me drive away.

I don't want to leave him. I want to sit with him and talk to him and tell all the boys at the bus stop, "Hey -- you've got to get to know this kid. He's so bright and creative, and lots of fun to be with! He's sensitive and thoughtful. He would be a great friend to have." But they don't speak English, and my Hebrew is poor at best. Instead, I drive the car slowly away, peering into the rear view window to see if he follows my advice.

I can't blame him for not being assertive at the bus stop. I'm afraid to call Israeli mothers on the phone to arrange play dates for my kids. What if they don't understand me? What if they don't want their child playing with an American?

Two little girls from my daughter's class come by to play with her. They run around the house in a wild and disordered way. They don't speak English and my daughter doesn't speak Hebrew. They communicate by pushing each other, throwing toys around, and chasing each other in and out of the house. My daughter becomes silly and screams out bathroom words. And then the two girls leave without explanation, and we are left to clean up the mess.

My daughter looks at me distraught, "Mommy, why didn't they want to play anything?'

Despite these difficult moments, they still climb into the car after school bubbling with energy, pulling colorful projects out of their knapsacks. Over lunch I'm careful to include my own challenges so they don't feel alienated (like how I didn't understand the discussion in Ulpan about washing machines and dryers and sat frustrated for close to an hour). They laugh at my trials and question me, "Does your teacher really only speak Hebrew like ours?

My daughter revels in the moment at pick-up where all the five-year-old girls run to the fence, screaming out, "Bye-bye, Avigyle!" waving, laughing and chasing the car as far as the fence would allow them. She is the only new immigrant in the group, and this makes her and interesting in their eyes. Knowing that she's and special is perhaps the primary factor enabling her to get through her day. For my son, it is the same. He is the "American." His principal and teachers are careful to say he's a "Yeled tov (A good boy)", to say to him, "Mah shlomcha? (How are you?)" and to smile at him. He reports every positive interaction to me, glowing because he's special.

To the Israeli children and school administration -- we are grateful that you take a moment to show a child you care.

But I don't mean to idealize my children.

Of course, they report negative moments too: I sat by myself at recess. I don't understand what the teacher is saying so don't ask me any questions about this week's parsha. I have no one to play with after school. I don't want to go to school today.

The more we give to our children, the better they can face the challenges of their world.

And that's when I have to ignore the tiny voice in my head saying, Don't bribe them with lollies, don't coddle them, just give them a push, they'll figure it out. Let them struggle a bit. Instead, I've learned that an ice cream cone with sprinkles in the middle of the week, an art project with Mommy, more trips to the park (even though Mommy is so tired she can barely manage the walk out the door), more learning and play time with Abba, and pizza two times a week can make all the difference in the world.

All this extra effort compensating for our children's lack of a comfortable social and academic life has truly paid off. My son can kick the dirt at the bus stop alone for ten minutes without feeling lonely because he knows he's really not alone in the world. And my daughter will invite her "wild" Israeli friends to play with her again because she understands that they do want to play with her, the same way her Mommy and Abba do, they just don't know how to communicate with her.

Moving to Israel has been a great lesson in parenting. The more we give to our children, the better they can face the challenges of their world.

All this giving is not easy. And frankly, I'm wiped out.

But at least a few times a week, (before I've lost my patience, raised my voice or done some other parenting faux pas), my daughter has looked at me with a sweet smile on her face, asking, "Why are you such a good mommy?"

I don't recall ever hearing that question in America.

There is a sense in the family that "we're all in this together." And perhaps, in witnessing our children slowly acclimate to their new life, we are inspired to work harder to adapt and to accept the changes in our own lives.

Ode to my children for giving us parents the opportunity to grow and to be better.

Still Crazy: Why We Made Aliyah
Mind Over Milkshakes
Love the Convert
In the Shadow of David and Goliath
Comments