The Man at the Door 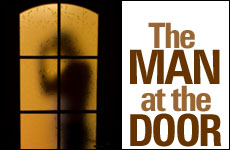 It's hard to make a decent living.

I am in the kitchen simmering a delectable alfredo sauce when there is a knock at the door.

"Come in," I call out. I live in a friendly town and neighbors are always popping in. My children run to the door where I hear a man asking for me. I dry my hands.

"I'm selling a soap that I manufacture by myself," the man says. He holds a black umbrella, blown inside out by the rain, silver spokes twisted and glinting. His face glistens with raindrops and pride. "It has special, natural properties. It can cure almost any skin problem."

I think of the warm heat blowing through my kitchen and the hot sauce bubbling on the stove. The chill from outside creeps over the threshold and I hope that his pitch will be as brief as my 'no thank you' will be.

"You just hold the soap under the water to activate it," the man says, unwrapping a seashell shaped bar. "Then rub it on. It can cure warts, fungus, even eczema."

I try to interject a slight apology, my body edging backwards into the house as the wind flaps the man's coat up around his ears.

"It has many other uses though," he says. My children cluster around me, listening, looking at the waxy pink bar. He prattles on while the smile freezes on my face.

"Mommy," my son says to me, tugging at my arm. I look down at my ten year old and his sky blue eyes are bright. "It sounds great."

The man beams. I nod at my son and continue listening to the man, my mind going fuzzy. And suddenly my mind travels back so many years and it is me who is tugging at my mother's sleeve. I remember the Fuller Brush man.

"Mommy, there's somebody at the door," I said as I looked through the peephole. "He's carrying a briefcase. I don't know who it is."

My mother came and I waited for her to tell him to leave, but instead I saw the door swing open. A man stood there, balding, wearing a pale blue shirt and a crisp white bowtie.

"Hello," he said with a wide smile. "I'm the Fuller Brush man. I'm here on behalf of the Fuller Brush Company." My mother waited patiently as he bent over and rummaged through his tired looking briefcase. His head was shiny, his back stooped.

"This here is a regular favorite," he said. "It's a table cleaner with a rotating brush inside. Lifetime guarantee."

We tugged at our mother's shirtsleeve. In our childhood innocence, we yearned for the Fuller Brush man to leave with a lighter load. But we knew it would take a miracle for our sensible mother to buy unnecessary products.

When the man finally left it was with a newly confident grasp on his bag. And we were surprisingly three brushes richer, including a table sweeper we would probably never use. My sisters and I looked at my mother, our faces round as question marks. She opened the white Formica drawer and shoved her new toys inside.

"It's hard to make a decent living," she said as she banged the drawer closed in response.

As the man unwraps another bar of his miracle soap, my children look at me with pure, shining faces. "It looks good," they say.

I have spent seven dollars on many a lesser thing than the self respect of a fellow Jew.

Seven dollars, I think. I have spent seven dollars on many a lesser thing than the self respect of a fellow Jew.

I turn to the man. "It sounds so interesting."

"Definitely," the man says. "It's made of all natural ingredients." He is already rummaging through his bag.

"I'll take a small bar," I say. I pay him and he disappears into the muggy night. My children look at me.

I sigh and kiss his cheek.

"Me too," I say. I start washing my youngest son's hand with the soap.

"Will my boo-boo go away now?" my little boy asks me.

I remember the Fuller Brush table sweeper. We ended up using it for years to clear our table of crumbs. Each time it swept us clean of a few crumbs of cynicism as we remembered the joy we had brought a man with a crisp white bow tie.

The Jewish Ethicist - Thou Shalt Pay
The Blue Beyond
Great Place to Live
Is Eating Supposed To Be Spiritual?
Comments
MOST POPULAR IN Current Issues
Our privacy policy