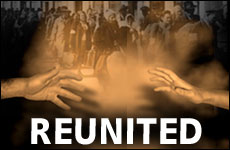 Over 6 decades after the Holocaust, a brother and sister are reunited.

After 65 years, in which each of them thought their sibling had perished in the Holocaust, and after they searched for each other in Israel and abroad, Hilda Shelik (75) and her brother Simon Glasberg (83) met Monday in Israel. With the help of Yad Vashem's website, the two siblings' grandchildren discovered that family members had indeed survived the Holocaust, even though they had previously been led to believe otherwise.

Their older brother, Karol Weiner, thought that Hilda perished in the Holocaust, and therefore submitted a Page of Testimony to Yad Vashem in 1999 in Hilda's name stating such. About a month and a half ago, her grandchildren found the Page of Testimony written by Hilda's brother. Karol passed away the same year, without knowing that thanks to him, his siblings found Hilda in Israel.

Like many other Jewish families, the family's story took a sharp turn in 1941 when the Nazis invaded North Bukovina. The family, living in Chernowitz, Romania, was split up. Hilda escaped along with her older sister Bertha and two nieces to Uzbekistan, and the rest of the family stayed in Romania.

All her life, Hilda mistakenly thought that her family members who remained in Romania were murdered in the Holocaust. She married Elye Itshok Shlick and they had two children, Zali and Hertha. Only in 1998 Hilda immigrated to Israel, following her son's family, who immigrated in 1991.

In a family conversation a few months ago, Hilda's grandchildren, Benny and David Shlik, found out that their grandmother's maiden name was Glasberg. With this new information, they performed a search in Yad Vashem's Central Database of Shoah Victims' Names in order to find more details about their grandmother's families. This is how they came across the Page of Testimony written by her brother.

David Shlik recounts, "I continued my search in the internet site of Montreal's burial services, and world forums and organizations of Chernowitz natives. I ultimately got to Karol's son, who told me that all of my grandmother's family survived and that two of her brothers are living in Canada. Within a month and a half we organized a meeting."

"It couldn't possibly be that any of them are alive."

"The moment we understood what was happening, we started gradually explaining to Grandma that there is this thing called relative searching and that it was possible to find her family members. She told me that it couldn't possibly be that any of them are alive, because she already looked for them many years ago. A few days later we told her that two of her brothers are in Canada."

During the family reunion, Hilda discovered that her parents lived long lives until the ages of 92 and 98, and passed away in the 80s in Montreal. Hilda's brother, Karol Weiner, passed away in Montreal in 1999. Another brother, Eddie Glasberg, passed away two years ago in Montreal. Her brother Mark Glasberg currently lives in Canada, but his health is in poor condition. Hilda has already expressed her desire to visit him. Mark's son, Irwin, lives with his family in Israel. Hilda's sister Bertha died in 1970, and the fate of another sister, Pepi, is still unknown.

Mark and Simon immigrated to Israel right after the Holocaust, fought in the War of Independence, and immigrated to Canada in the 1950s. "The first day we were able to come to Israel, we got on a shaky boat and arrived here," Simon recalled with teary eyes. "I came to search for my sisters. They told us that we are all coming to Israel, but I didn't find her then."

Yad Vashem's name database was launched in November 2004, with 3.1 million names from the Pages of Testimony, archives lists, and local projects throughout the world in which names of those murdered in the Holocaust were collected. Until now, over 10 million people have visited the site from over 200 countries.

Reprinted with permission from ynetnews.com