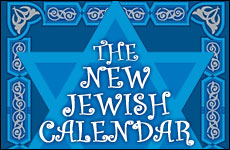 It's time we Jews added a few "National Days" of our own to the secular calendar.

I'm a calendar maven. I conceive them. I write them. (Among other things.) Of course, don't ask me, "When's Arbor Day?" Or worse, "What's up with Anzac Day?" My mind detours around: 1) where something is; 2) when it is. Like Pesach. And I'm not alone.

True. The Jewish calendar's been around –officially – for 5,000 years, give or take. But for many Jews, the task of knowing when is even more daunting. As my friend, Borscht Belt legend and Friar's Club Dean, Freddie Roman, joked in his hit show, Catskills on Broadway, many Jews have no idea when our holidays are. If we don't have the Manichewitz Seven Year Calendar, we're clueless. Who among us hasn't heard someone say, "Isn't Chanukah early this year?" We're always talking "late" or "early." But on time? This you don't hear.

Our holiday are either "late" or "early." Never "on time."

That said, this year while writing A Little Joy, A Little Oy, and The 10 calendars for 2010, I noticed something – after 15 years. The secular calendar notes our Big Religious Holidays – Passover, Yom Kippur, Chanukah. But National holidays? Not one that's Jewish – or for a Jew! (Even though the Gentile kids in my neighborhood "religiously" saw Sukkot and Simchat Torah as "National Skip School Days.")

Wait ... it gets more insulting. I learned that virtually every day of the year is assigned a "something." Look at this month alone: March 1st is National Pig Day. (Definitely not "us.") March 3? I Want You to be Happy Day. (Better.) The closest I found were: Everything You Think is Wrong Day, National Chocolate Covered Raisin Day, National Doctor's Day.

See it? Americans celebrate wrongs, raisins, pork, even. Yet, after all we've done, given, donated ... we get bupkes!

So, as we prepare for Pesach, I felt it's time we Jews added a few "National Days" of our own to the secular calendar. (For those who would accuse me of stereotyping? I stand pelted with matzo balls.) Here are the first five.

Jewish Labor Day, or alternatively, Not My Business Day: That's right! For one day a year, we kick back, have a glass iced tea, and not get involved. Our daughter wants a piercing, our son sent an application to Hamburger U. Our mate of 20 years started building an Ark in the garage with his Ron Popeil knife set? We sip and say, Not My Business Day, I shouldn't mix in. I suggest it falls the Sunday before the High Holidays – so "they" can atone.

Jewish Labor Day, or alternatively, Not My Business Day:

Jewish Declarative Statement Day: On this day, every Jew must actually respond to a question with a declarative sentence. No repetition, no flip, no question marks. Sarcasm, however, need not be sacrificed.

This should fall on September 28 – the day before National Stupid Question Day to keep some of us from exploding. (Note: the date may be adjusted to occur before, never on, the Jewish holidays)!

Jewish Benign Week: Starting the Monday following Cover the Uninsured Week (May 23-30), all Jews will feel good (even if they don't). And tell everybody we know. No answering, "So how are you feeling?" with "Don't ask." No spitting, shushing, Keyn eynhores over a clogged sinus. No showing "suspicious" spots on us to our neighbors, plumbers, or supermarket check-out people. More sacred than the above holidays, it's our week to rejoice and show gratitude for each diagnosis that came back "benign," along with hope for a Benign new year. On Erev, we will serve a traditional whitefish mold in the shape of Mount Sinai (the hospital) and recite, Ribbono shel oilam, let it be benign!

National Jewish Reality Show Month : For 30 days, during February TV "sweeps" all "reality" shows will reflect ... reality. After all, who knows this concept better than us? Amazing Races? Hell's Kitchen? Survivor? Feh! From this we know. Starting Feb 1, a new slate of Jewish Reality Shows will occupy choice top-slots. Here are a few of my selected "pitches."

*The Real Housewives of Pelham Parkway: From making beds, to building a New shul, to making brisket, this show follows the lives of five real Bronx women—who stayed on Pelham Parkway.

*The Billionaire Bachelor(student) - He's filthy rich yet all the usual attempts to find him a Kallah (bride), from his family, his shul, to Hadassah-mates.com have failed.
Why? A billionaire he is, but he's also seriously bulvan-challenged. Last stop? The Shadchan, whose job it is to either turn him into a mensch, or find a bulvanette – who looks like Britney Spears – only Jewish, and younger.

* Are you Heavier than a 5th Grader?: celebrities clamor to have a BMI. Any BMI involving having a "Body" with a "Mass" while their supporters yell "eat a little something. In rounds, competition heats up as competes as contestants, for example, are challenged to complete a whole carrot in under 20 minutes.

* Shtele-Swap Survivor: A group of Jews compete to see who can survive a job they've swapped with a non-Jew. For example, a doctor or lawyer must be a hit as a: pizza twirler, lumberjack, Navy Seal, juggler, mime, bull fighter, rodeo – well anything.

Jewish Presidents Day: On this day, we should reflect upon all the Jews who should've become President – but didn't. I'll start.

*Bernard Baruch. The man advised every President since Washington. Never once a nomination for dog catcher!

*Walter Annenberg. Media giant and philanthropist who advised Reagan and Nixon. He was appointed ambassador to the Court of St. James's – but this is one guy who would've had the sachel to be taped-not, or burn them.

*Barbara Walters. Not only does she know world leaders, she can make them cry. Proven track record handling the mishegoss politics on The View. Two of her interns would find Bin Laden for a Babs Special, one, two, three. And make him cry.

Next week, the final five. But ... by all means, if you've been chaloshing to commemorate, plotzing to praise, bursting to break out the Manischewitz, by all means, post a comment with you own suggestions! Remember, everybody's entitled to have their day ... no matter how ... meshugge.