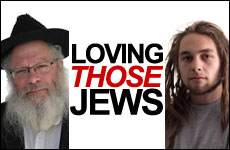 The urgent imperative of Jewish unity.

"Atomic inspectors have found that Iran recently understated by a third how much uranium it has enriched, United Nations officials said Thursday." This tidbit in February 2009 New York Times was followed by another tidy piece of information: "The officials also declared for the first time that the amount of uranium that Tehran had now amassed – more than a ton – was sufficient, with added purification, to make an atom bomb."

The Times goes on to quote Gary Milhollin, director of the Wisconsin Project on Nuclear Arms Control: "It's worse than we thought. It's alarming that the actual production was underreported by a third."

If Mr. Milhollin, sitting in Wisconsin, is alarmed, how should those of us sitting in Israel feel? Iran's President Ahmadinejad has repeated threatened to "wipe the Zionist entity off the map." Now, his 5,600 busily spinning centrifuges (in one site alone) will soon put that dream within his reach.

Of Persian Rulers and Genocide

We've been there before. In the year 355 BCE, Ahashverosh, the ruler of Persia (modern-day Iran) issued an edict "to destroy, kill, and exterminate all the Jews, young and old, women and children, on one day." Before the designated date in the month of Adar arrived, however, the plan was thwarted. That salvation is commemorated every year since as the holiday of Purim.

We can learn how to respond spiritually to our current Persian predicament by examining the Book of Esther.

The antidote for a mortal threat to the Jews is unity of the Jews.

When Haman, a Hitler prototype, approached the Persian king with his plan for genocide, without naming the Jews, he described them as, "a certain nation scattered and dispersed among the peoples." This characterization of the Jews as divided, indeed disunited, was the spiritual flaw that allowed the edict of extermination to be promulgated.

Once alerted to the threat, Esther (who by Divine manipulation was chosen to be Queen of Persia) directed Mordechai to provide a spiritual back-up for her daring plan to topple Haman. She told Mordechai: "Go and gather together all of the Jews..." The commentaries point out that this act of unity was the antidote for the disunity that had left an opening for the edict of genocide in the first place. The Jews, realizing the fatal danger facing them, united in prayer and fasting. The result was a sudden and complete reversal of fortune. The Jews were not only saved, but were elevated to a glorious position in the empire.

Let's face it: We Jews are a factious people. The adage "Two Jews, three opinions" loses its humor when we understand that our divisive tendency could be – and has been – our ruin. The Talmud states that the destruction of the Holy Temple, the end of the Jewish state in 70 CE, and the beginning of our torturous 2,000-year exile was attributable to one thing: hatred among Jews.

The problem is not our diversity, but rather our divisiveness. The Jewish People issued from 12 distinct tribes, each different in its nature, proclivities, and way of relating to the world. Yet God expects us not only to get along, but also to love each other. Rabbi Akiva, one of the greatest rabbis in the Talmud, identified the core principle of the Torah: "Love your neighbor as yourself." This mutual love is not just a lofty ideal, but a compulsory commandment. And when we fail at loving each other (because we don't even try!), we plunge into an abyss of exile, anti-Semitism, terrorism, and war.

In order to actually practice Ahavat Yisrael, we have to first expunge from our behavioral repertoire lashon hara, evil speech. This denotes all negative, critical, and condemning remarks, even if they're true.

Loving fellow Jews while continuing to condemn is akin to drilling holes "just" in the stern.

Trying to practice loving your fellow Jews while continuing to condemn "just them" (the Jewish groups you dislike) is akin to building a boat and drilling holes "just" in the stern. Judgmental words will sink us all. Thus the first step in practicing Ahavat Yisrael is to declare a moratorium on speaking negatively about other Jews, whether individuals or groups. [For more on the mitzvah of not speaking lashon hara, click here.]

The second step of Ahavat Yisrael is to proactively love others by working in the following four areas:

1. Addressing internal negativity that gets in the way of loving others
2. Restoring close relationships
3. Pursuing Ahavat Yisrael in your own community
4. Connecting to the entire Jewish People

The first area means working to rid yourself of anger, resentment, hatred, fear, and grudges that keep you from loving yourself and other people. A turning point in my own life came when I was a student at Brandeis in the turbulent 60s and belonged to S.D.S., a radical leftist organization devoted to seeking peace in Vietnam. I read a statement by Alan Watts: "Peace can only be made by those who are peaceful," and realized that our bickering, intolerant, indeed hateful, group had to first change ourselves before we could change the world. While working on oneself is a long and arduous process, Judaism provides a wealth of teachings on how to rid oneself of internal negativity.

The second area involves making up with your husband, parents, children, siblings, or other relatives which whom you have a strained relationship. There can be no harmony within the Jewish people if there is discord among families. This may entail phoning (or, even better, visiting) a relative, and saying, "I'm sorry. I love you and want to have a relationship with you," even if the other person instigated the quarrel.

Stop, empathize, and say: "These are my people, part of my family."

The fourth area involves enlarging your heart to feel the joys and woes of the entire Jewish People. Kassam rockets falling on Israel's southern towns? The persecution of the Jews of Venezuela? Anti-Semitic attacks on Jews in France? Our response to each of these should be to stop, empathize, and say to ourselves: "These are my people, part of my family." Identifying with all the world's Jews and embracing them is an essential part of Ahavat Yisrael.

Another way to connect to the Jewish people as a whole is to share your wisdom and love for Judaism with other Jews. For example, if you like an article you read on Aish.com, send it out to Jews in far-flung places. If you've read a book about Judaism that inspired you, recommend it to a Jewish co-worker.

Practicing Ahavat Yisrael requires a daily stretch beyond our comfort zone. For example, this morning I was on my way somewhere when a downcast-looking neighbor started speaking to me. Although I was short on time, my commitment to Ahavat Yisrael got me to stop and listen to her. After 15 minutes, she smiled and said to me: "I cried for four hours this morning, but the more I speak to you, the better I feel." That's what Ahavat Yisrael looks like.

Three months before he died, Rabbi Noah Weinberg, zt"l, the founder and dean of Aish HaTorah, went to the world's foremost rabbi, Rav Elyashuv, to speak about the dangers facing the Jewish people. Rav Elyashuv told him: "The danger to the survival of the Jewish people is greater now than it was in the darkest days of the Holocaust."

Rabbi Weinberg's final message was: The threat is real. Our enemies are determined. We Jews must be equally determined.

As Purim proved, the tried-and-true weapon for staving off our annihilation is Jewish unity.

* You may be wondering, "Why just work on loving all my fellow Jews? Why not love everybody?" Although loving all human beings is indeed a Jewish value, because all humans were created "in the image of God," resolving to love the whole world is like resolving to become a world-class tennis player when you haven't yet mastered getting the ball over the net.

Loving, which is a far more difficult skill than playing tennis, must be mastered in stages, or rather concentric circles. The innermost circle is yourself. If you don't love yourself, you cannot love others. The circle closest to you is your family. People who profess to love the whole world but who haven't spoken to their father in years are self-deluded.

If you are Jewish, the next circle is the Jewish people. If you claim to love the whole world, but can't stand half of the 14 million Jews in the world because they differ from you religiously or politically, you are like a person on a Greenpeace boat trying to stop the slaughter of whales while wearing a genuine fur coat. The next circle is all human beings. And the last circle is all sentient beings. If you can get to that level, you've won Wimbledon.

To invite Sara Yoheved Rigler for a lecture or Workshop for Women in your community, please write to her tour coordinator at slewsi@aol.com.

The Orthodox Community I Know

I Am Israeli
In the Shadow of David and Goliath
Where Do the Laws of Nature Come From?
Saadiah Gaon, Rashi and Maimonides: How Three Rabbis Revolutionized Judaism
Comments