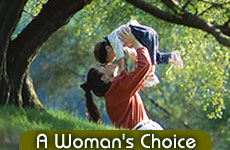 More and more women are choosing to conquer the world by staying home to raise their children.

My mother-in-law, who has held some pretty high-profile jobs (including Assistant Attorney General under Carter), used to say that the women's movement was inaptly named. It wasn't really feminism; it was careerism. It wasn't a recognition and celebration of the ly female contributions to society; it was a glorification of the job market.

Although Betty Friedan spoke of women's right to choose, a careful reading of her work suggests that only one choice is acceptable -- a career. Motherhood was demeaned and diminished. Clearly only women with no brains or ambition would stay home to raise their family.

Bright, well-educated young women are choosing to stay home with their children because they see the importance and want to.

So when I read Lisa Belkin's article, "The Opt-Out Revolution" in a recent edition of Sunday's New York Times Magazine, I applauded. Not because I thought every word she said was true, but because finally it was all out in the open. Bright, well-educated young women are choosing to stay home with their children. Not because they have no other options [Belkin's article focused on the fortunate mothers who do]. But because they see the importance and want to. Because finally, almost 40 years after the inception of the women's liberation movement, women are truly free to choose. And they're exercising that choice in droves.

About 18 years ago, we had a young man over for Shabbat dinner. I had left a career in law to raise my children and be involved with Jewish education on the side. As he ate the food I cooked, in the home I lovingly constructed, surrounded by the children I devotedly raised (who were engaged in some important game whose main component seemed to be making ear-splitting noises!), he said, "I wouldn't want my wife to be just a housewife."

Being a polite hostess, I kept my mouth shut (the stridency of early feminism being no longer in vogue) and refrained from dumping dessert on his head. But inwardly I seethed. "Just a housewife!" Is he just a lawyer? Is she just a CEO?

Parenthetically he is now married for many years with three young children, his wife being a stay-at-home mother renowned for her kindness and hospitality. And I know he doesn't think of her as "just a housewife."

Betty Friedan's book, "The Feminine Mystique," is a powerful and seductive read. Not all of the women in the much-maligned 50s were unhappy. Not all of the stay-at-home mothers spent their days trying to see their faces in their dishes. Not all felt they had chosen wrong -- at least not until they read Friedan's work. It's not just an intellectual argument; it's an emotional appeal that seeks to persuade the reader (in most cases, effectively) that she couldn't possibly feel satisfied at home raising her family. At the right moment everyone is susceptible.

Ms. Belkin's article articulates a broader philosophical perspective that says success is not only measured by money and corporate power, that the merger of two companies may not be as significant or personally rewarding as the rearing of children, that women can feel good about themselves, even proud of themselves, whatever road they choose.

Most of us recognize and value the efforts of the very early feminists -- the vote (way back), equal pay for equal jobs, fair and unprejudiced admission to colleges. But after that point, we risk the mistake of elevating career over family, of defining success in work-oriented public terms as opposed to broader needs like satisfaction, balance, sanity.

Doing a good job of child-raising and attaining significant professional success are almost mutually exclusive. Something has to give.

Having tried the experiment, it's clear to see that doing a good job of child-raising and attaining significant professional success are almost (there's always an exception) mutually exclusive. Something gives -- usually the woman's sanity, but unfortunately often the marriage and/or the children's emotional life as well. As many women interviewed in the article suggested, it's just not worth it. The rewards, such as they are, don't justify the price.

The Torah suggests that a woman's power is most effectively exercised in the private sphere. Lisa Belkin's friends seem to share this viewpoint. The breadth and depth of that power is unlimited! Even Ms. Amsbary concedes at the end of the piece that women do in fact run the world, just not in the traditional "career" way envisioned by the sixties feminist.

What better way to impact society that through raising another generation that shares your values and goals?

Sarah Amsbary may not want to conquer the world, but by staying home to raise her children, and by empowering other women who are able to make the same choice, she's more than halfway there.

One Drink Too Many: My Journey of Breaking Free from Alcohol
The Scandalous History of the Aleppo Codex
Who was Two-Gun Cohen?
Why Really Everyone Believes in Free Will
Should Jews Support Ukraine?
The Jews of Cuba
Comments
MOST POPULAR IN Women
Our privacy policy