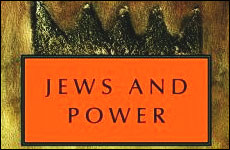 If Jews are so smart, how come we are so stupid?

To reflect upon the story of modern-day Israel's struggle for survival, it seems as if unparalleled naivete is the national credo. Continually threatened by Arab countries clearly declaring their intent to destroy it, Israel pursues a policy that believes in arming its enemies in order to gain greater security. As Abba Eban famously put it, Israel is the only country in the world that wins wars and then sues for peace.

To put it bluntly, where are our vaunted brains when it comes to politics and power?

In the latest in a series called Jewish Encounters, the eminent Harvard Professor of Yiddish Literature Ruth Wisse tackles this conundrum in her book aptly titled Jews and Power. While misconstruing a theological principle that leads her somewhat astray, the gist of her analysis is so pertinent to the current situation that this work cries out to become required reading for anyone concerned with not only the Arab-Israel conflict but the very continued existence of Western democracy.

Jews, Wisse reminds us, always blamed themselves more than their enemies for their misfortunes. It was a way of responding to the problem of "How could God have done this to us?" -- if we suffer, we probably deserve it. The underlying reason for the Temple burning to the ground, the Rabbis explained, was because of needless hatred among our own people. The Romans were just the external means. Since Jews believe in a Supreme Power -- King of all kings, He surely could not be defeated by any mortals. Therefore defeat must be His will -- the enemy was merely carrying out what God ultimately wanted. Weakness wasn't powerlessness; it was the strength to abide by a Divine decree imposed upon them from Above.

Where Wisse goes too far is in making it appear almost as if Judaism preaches passivity in the face of evil.

Where Wisse goes too far is in making it appear almost as if Judaism preaches passivity in the face of evil, and war can never be justified. That of course was never the reality. A religion that makes peace its mantra nevertheless repeatedly stressed there is also "a time for war". Indeed there are situations that go so far as to allow a war to be called a Milchemet Mitzvah -- a war that fulfills a divine commandment. "He who comes to kill you," the Talmud advises, "rise up first to slay him." The wickedness that comes from human beings who misuse their free will to commit crimes against us ought never to be confused with heavenly approval.

But Wisse is correct in her assessment of Jewish behavior fashioned by centuries of Diaspora existence. Jews did lose sight of their need to add might to their legitimate requirements for survival. The great political experiment that Jews perfected as a result of necessity was to persist and thrive as a people without the three staples of national existence: land, independent means of self-defense and a central government. But it was not really a political response that assured them security, refuge or even life. Diaspora Jews were tolerated for their contributions and then just as readily denounced, exiled and -- witness "The Final Solution" -- brutally murdered.

The challenge facing Jews as they returned to their land in 1948 was whether they now could at last readjust their political orientation. Yes, Jews were able to farm the land, to beautify it and to turn it into a modern and thriving oasis in the Middle East. But could they get over their aversion to power and their need to always seek the approval of others?

Here is where we so abundantly failed -- and continue to fail. Despite the constant threats to its very existence, Israel refuses to acknowledge that Arab-Islamic hostility has nothing to do with the size of its borders but rather with the idea of its very being. Its policy is dictated by substituting a wish for a possibility. We speak to enemies as if we share a common goal of peaceful co-existence when the reality is best expressed by the Palestinian Musa Alami's response to Ben Gurion years ago when the Jewish leader assured him he had nothing to fear from the Zionists who were bringing a blessing to the Arabs of Palestine: "I prefer," he said, "that the country remain impoverished and barren for another hundred years until we ourselves are able to develop it on our own."

It is a grave mistake to ignore the stated intentions of Israel's enemies. Unilaterally giving up Gaza or any other territories is viewed as weakness, as well as a sign of the power of terrorism to achieve its ultimate ends. The only peace that can come from the abandonment of power is the peace of the dead, destroyed by their unwillingness to face reality.

Perhaps the most relevant of Wisse's conclusions is the point she stresses at the very end of her brief exegesis of Jewish history. For the first time, she eloquently argues, "the ability of Jews to withstand their assailants affects the security of other nations as much as their own." As James Woolsey, former Director of the CIA put it after 9/11, "We are all Jews now." The clash of civilizations between Islamic fanaticism and Western democracy calls into play the very same issue. Accommodation, based on the kind of logic that created the capitulation of Oslo, threatens all of us.

Would it not be the ultimate irony if the way in which Jews, in the words of the prophet Isaiah, may serve as a "light unto the nations" is by serving as warning for the terrible consequences of failure to understand the proper uses of power? That's why it is more than time for us now to listen to the words of the Wisse.

Cobra Kai: The Sensei vs the Rabbi
Bechukotai 5782: Divine Retribution
Behar 5782: Working to Live or Living to Work?
The Wholeness of Being Broken
Comments
MOST POPULAR IN Arts
Our privacy policy