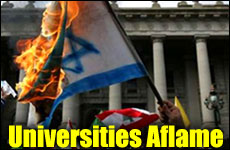 Jewish students gear up to battle Israel Apartheid Week, an annual hate-inspired phenomenon that is spreading at an alarming rate.

March 1-8 marks the fifth annual hate-fest known as Israel Apartheid Week. Originating as a singularly disturbing display in Toronto in 2005, anti-Israel propagandists are expected to hold events and demonstrations in nearly 50 cities around the world this year. According to IAW organizers, these events will liken democratic Israel to apartheid South Africa, allege that Israel committed a massacre during its recent defensive incursion into Gaza, and call for sanctions against and divestment from Israel.

If past IAW events, and the hostile activity against Israel since Operation Cast Lead are any indication, we can also expect open displays of explicit anti-Semitism, physical harassment of Jews, and vigorous attempt to curb freedom of expression among Israel supporters.

The university campuses have long been a front line for this propaganda war, but in the past month anti-Israel and anti-Semitic occurrences on campus have reached unprecedented heights. In the last eight weeks, there has been significant anti-Israel activity at more than 200 college campuses in the United States. This includes many schools with large Jewish populations, as well as universities where we have never seen such activity before.

Here are a just a few alarming incidents:

Large Israel Apartheid Week events are slated to take place next week on university campuses in Boston, Chicago, Washington DC, Atlanta, San Francisco, Toronto, Montreal and Ottawa, and smaller versions are set to occur at many other schools across North America.

If you are a student or concerned community member, we urge you to take action via the following steps:

1. Answer the lies head on -- go to protests and speakers, hand out accurate information, and speak up!

2. Launch a strategic initiative to engage important people on campus, including the media, the administration, student leaders, professors, coalition allies.

3. Organize demonstrations of solidarity with Israel, such as rallies and educational campaigns.

4. We can't stop anti-Semitism, but we can send a message of our own. What is your plan to get the pro-Israel message out there? Choose from an array of programs and campaigns offered by Hasbara Fellowships.

5. Most importantly, if you are on a campus with anti-Israel activity, contact us (director@israelactivism.com) to help you through it!

Our Failed Mission
Bechukotai 5782: Divine Retribution
Behar 5782: Working to Live or Living to Work?
The Wholeness of Being Broken
Comments
MOST POPULAR IN Jewish Society
Our privacy policy