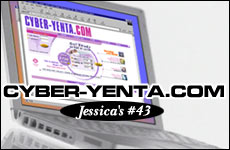 Jessica is ready for the world of cyber-dating. Sort of.

"I am so proud of you!!" Alison was beaming.

Yes... I, Jessica Shaeffer, ever-so-reticent to do anything proactive about my dating life, only recently emerged from my moping cocoon, had actually signed up on a Jewish dating website. And now, I was recounting the glory of receiving not one... not two... but three! three! fabulous e-mails for all to envy!

I was well on my way to becoming the Mamie Van Doren of the world wide web...

"Jessica," chuckled Ellen, exchanging a knowing glance with Alison, "you realize that before you can take your crown as the most desirable girl on Cyber-Yenta.com, you have to respond to your suitors..."

"I know! I know!" I laughed with them. "I already responded to one."

"Really?" Alison asked, pushing her dressing-free salad around her plate, the croutons piled to the side in concert with her death-to-carbohydrates mission.

"
Somehow, a guy twice my age who can’t unstick his caps lock key or use a contraction,"
I continued, "
is not exactly what I’m looking for."

I wasn't sure how to proceed with the other ones -- hence my late-night Coffee Plantation meeting with Alison and Ellen, both of whom had already leapt into the virtual dating world. It seemed to me that I was entering a new dating universe, albeit somewhat behind the times.

"What are they like? Did you recognize their pictures?"

A guy twice my age who can't use contractions. Not what I am looking for.

I didn't. One of them, Brandon, sounded really great in his profile. He was older than the age range I had listed, but said he looked and acted younger. The other, Marc, sounded a bit more, well, blah.

"So basically he's telling you that he's embarrassed about his age and he's immature," she said. "If someone is 40, shouldn't he act 40? Or at least not pretend that there's something wrong with it?"

Hmm. Hadn't thought about it that way.

"It's so weird how everyone is on Cyber-Yenta now," Alison mused. "I think at least three quarters of young leadership is. Well, except the married ones."

I nodded. After initially browsing the database, I had almost not signed up -- since pretty much every Jonathan, David and Marc I knew was already on it. (Except the Marc who had written me, whom I didn't know.)

What seemed such an oddity a few years ago was now standard, even de rigueur.

"
I still don’t get it,"
I thought aloud. "
I am doing this with only a modicum (or a modem) of embarrassment... remember how there used to be a huge stigma associated with personal ads?"

"
Listing yourself on a dating website is basically just a personal ad in cyberspace,"
Ellen said.

"
But even for people who weren’t in college then,"
Ellen broke in, "
I think there was a certain air of desperation associated with personal ads... I guess people now are just more practical. It’s not desperation to want to meet someone, and there just aren’t that many ways to do it."

She was right. How many guys can you meet through work? And when you’re looking for Jews, a mere two percent (if that) of Phoenix’s population, you have to automatically cut out 98 percent of the guys you do meet.

I found myself longing nostalgically for bygone days I’d never experienced -- when couples met at 21, and lived happily ever after...

It was an inverse of the rituals of the previous generation. If we had gone according to the date-and-marry-under-the-apple-tree model, I probably would have followed someone to school, or waited for him. We would have been “pinned,” or undergone some other such primordial mating ceremony. We would have been married for years by now, probably with a little Nathan or two running around.

I half-listened to Alison and Ellen continue discussing how hard it was to meet people: Everyone works all the time. Everything’s really spread out. You don’t really know your neighbors. Most people don’t have extended family living nearby anymore.

There was a huge space between us and the apple tree generation, even if it was only two or three decades.

Still, I went home and dutifully responded according to Ellen and Alison's instructions: Write back a short note letting him know you're open to corresponding, and then either you'll exchange a few e-mails or you'll speak on the phone. If you want to meet, you meet. If you don't, you don't.

By mid-morning the next day, I had e-mails from my girlfriends asking what, if anything, had happened. Alison instant messaged me.

AlisonCushman: So what about the boys?

AlisonCushman: What about other one?

AlisonCushman: Hmm. That's probably a good sign -- icky if he's checking his e-mails every five minutes. You want someone with a life.

JShaef: Alison, **I** have been checking my e-mail every five minutes.

The telltale beep that I had e-mail came shortly thereafter.

It was -- yes! -- another guy responding to my apparently irresistible profile.

I furrowed my brow at the familiarity: "
Jessica, please write me."

I clicked the link to see his profile.

It was Nathan Feuer, the first guy who I ever met for a date.

Jessica #60 - Home For The Holidays
Near Death Experience Panel
The Western Wall: The Heart of the World
Ask the Right Question: Tisha B’Av
Comments
MOST POPULAR IN Dating
Our privacy policy
Aish.com Is Looking for Great Writers