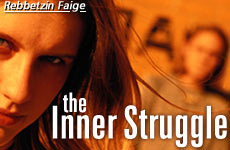 A decade of envy, illusions, and negativity has come crashing down. How to crawl out of the darkness?

A reader writes to Rebbetzin Faige:

I am 30 years old and have never been married. At the age of fourteen, I developed a mad crush on a distant cousin of mine. Although he did not share my feelings, I naively and stubbornly thought that I could change his mind. My emotions were so strong that I chose to ignore the possibility that he could not be my soul mate.

During our teenage years, we became physically involved, and simultaneously, he had other girlfriends. In our early twenties, we stopped seeing each other, and he continued having girlfriends until he eventually married a girl in the backyard of my parents' house. I was still madly in love with him, but incredibly bitter having my treasured dreams for a blissful marriage trampled on. I completely lost my femininity, and began to hate men, and God. I went from being completely depressed to being completely numb, and constantly settling for less. It was a downward spiral, up until the moment on Yom Kippur more than three years ago, when I was finally willing to accept responsibility for my grave error.

I was still madly in love with him, yet incredibly bitter about having my
dreams for a blissful marriage trampled on.

Looking back on those 10 years, I am aware of the spiritual damage I did to myself. Though I have made great strides, I have only scratched the surface of all the work I have left to do to return to the person I would have been, had I not chosen to become obsessed with someone who, in any case would have been spiritually inadequate as my husband.

All I ever wanted was to marry and have children. As I continue my arduous climb out of this deep dark pit, I look over at him, and see all of his dreams come true. There is a habitual anger within me that wants him to know what it's like to be left desolate. I secretly envy his wife for having her version of what I have always wanted.

To make matters worse, I still feel symptoms of infatuation every time I see him. I have shortness of breath, my face gets flushed, and my hands tremble uncontrollably. I wish it would stop. I know that behind this person is someone who, for most of his life, has catered to selfish desires without regard to those around him. Yet I can't shake off the effects that this long-standing illusion has on me.

I'm 30, and want to get married and have children. This test represents my big, final hurdle. Do you have any guidance or suggestions?

Thank you for sharing your thoughts. I believe that we can find valuable insights by looking at the life of our patriarch, Jacob. In Genesis 32, Jacob "wrestled with the angel," and triumphed in his epic battle with his brother Esau's heavenly representative.

In concession to his victory, Esau's heavenly emissary bestowed upon Jacob a new name -- Yisrael. The verse explaining this new name translates, "because you struggled (sarito) with man and with God and you won" (Genesis 32:29). Surprisingly, the name Yisrael is derived from the Hebrew word sarito -- referring to the struggle rather than the victory.

The commentators points out that, indeed, struggle is really what the life of a Jew is all about. It's about facing our inner adversaries, flexing our spiritual muscles, and giving it all we have -- our very best shot.

We all have internal angels and demons to contend with until our final breath.

We all have internal "angels" and "demons" to contend with until our final breath. An American Indian elder once put it this way: He has two dogs inside of him; one good one and one very mean one, and they are constantly fighting with each other. Asked which one ultimately wins, he said the one that he feeds the most. We each may choose which one to feed at any given time.

In Judaism we call this the Yetzer Hara and Yetzer Hatov.

Consider Gail who was living in the fast lane of life, drunk with the blandishments of a Hollywood existence. Yet in her prime, she was struck with a debilitating and severe form of cancer. Her prognosis was grim. Confronted by her mortality, she began to challenge her beliefs and her frivolous mode of living. She began to explore spiritual and meaningful pursuits in which she ultimately found purpose.

And she lived for many years beyond doctors' predictions.

Before she died, Gail shared with me that though her life had been cut short and she had endured great pain in her years of survival, she was, nonetheless grateful for the wake-up call. She said that looking back at her pre-illness days she had been on a path of wasted existence and ultimate oblivion. Her suffering had led her to get in touch with her inner resources, and gave her serenity born of the ability to make a contribution to life.

Challenges, whether externally imposed such as illness, losses, and misfortunes, or alternatively, those emanating from our inner struggle with the dark side of our being, can motivate us to reach our greatest potential and become the best that we can.

King Solomon said in Proverbs: "Seven times do the righteous fall and rise." The righteous person is defined by his faith and does not give up. Rabbi Yitzhak Hutner, a 20th century thinker, explains that precisely the person who has fallen seven times and utilized his strength to pull himself out of the pit, mindfully learning from his mistakes, is the one most likely to emerge as "righteous."

Now that we've spoken about struggle in general, let's examine some of your specific concerns.

"Envy rots the bones," our Sages caution. Not the bones of the other person (the object of the envy), but of the person who is envious. Envy is consuming and drains us of energy that is so critical to building a productive and constructive life. One who abides the envy is ultimately the real victim.

It is noteworthy that every day at the conclusion of the silent devotion we ask for Heavenly assistance, specifically in battling envy and jealousy. It is recognized as a powerful, devastating, and ubiquitous emotion, very much a part of the human condition.

The loudest sound in the universe is one who battles and overcomes gripping negative attributes such as envy.

Rabbi Yisrael Salant taught that the loudest sound in the universe is one who battles and overcomes gripping negative attributes such as envy. Praying is a powerful resource. Asking for God to hold our hand as we engage our struggles can be liberating.

Particularly in your situation, it is vital that you surround yourself with positive energy, with growth-oriented people of solid values who understand that life is serious and that there is no substitute for hard work. You must continue to learn, study, and attend classes on Jewish philosophy and perspective that will reinforce the understanding that the Almighty gives us what we need.

In this case, the omniscient Master of the universe has apparently determined your desires are not ultimately in your best interest. Accepting and deferring to God's will is by no means easy, but it is the only approach and context that will lead to clarity and direction.

We recently remodeled my husband's library. It was supposed to be completely done by the time we returned from out-of-town commitments. Predictably, it was still quite unfinished by the time we returned. We were overpowered by the strong and offensive odors of fumes from stain and polyurethane. We opened vents, turned on fans, etc. -- all without much improvement.

Then I discovered that the best environmental solution to our problem were the delightful and curative aromas emanating from baking challah, and cooking gefilte fish and chicken soup. Totally banishing the undesirable and replacing it with good may be a daunting task, but is assuredly possible.

I would advise you to spend as little time as possible in the presence of this man or his circle of people. Instead, you should build a full life for yourself (friendships, work, meaningful activities) that will fill your mind and heart with so many positives there will be little room for anything negative. It is a matter of replacing the unacceptable and toxic with a healthy context in which you will heal, thrive, and ultimately become whole.

And in your wholeness, you will attract people of like energy to yourself.

Cerebrally, you understand and acknowledge that what you desired all these years is an illusion and would lead down a very destructive path. But your emotions, your heart, is having a hard time catching up. Leaping into external trappings is far easier than the internal shift and commitment necessary over the long term. Growth is a laborious process and requires a great deal of patience, because progress is often made in very small increments. A quarter century of behavior, attitudes, and beliefs are not replaced in a day.

Every step along the way, claiming a heather life, is a major victory that must be celebrated and applauded. You must nurture, endorse, and give yourself credit for achievements -- even if they seem pitifully modest compared to the distance still to be traveled.

Success breeds success, and acknowledging achievements will provide the energy for continued growth. You are on the road, and you have engaged the adversaries. You qualify for the name Yisrael -- "you have struggled with man and God." There can be no greater goal, and with persistence and determination, you will, with God's help, triumph.

Body and Soul
The 21st President of the United States: Failure or Inspiration?
Hiding Their Jewishness
The Jewish Pope: Following the Questions Home
Comments