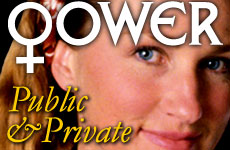 The feminist movement has failed to recognize another, more subtle form of power: internal power.

An excerpt from Rebbetzin Heller's new book, "Our Bodies, Our Souls."

The feminist movement stemmed from women feeling disempowered. Men clearly controlled (and still control) the reins of power in the political, financial, and judicial spheres, which determine most of the obvious facets of personal and societal existence. Thus, a primary goal of the women's movement has been to demand a share in this power through equal pay and equal employment opportunities.

Power, in essence, is the ability to effect change. If women have financial clout or high political or business positions, it is thought, then they too can determine the changes that will affect their lives and the lives of others.

But the feminist movement has failed to recognize another, more subtle form of power: internal power -- the ability to affect other people's ethics and values. While external power may procure a high corporate position, internal power will determine whether that corporate executive will be honest or embezzle.

Women's quest for external power has left a frightening vacuum in Western society in the area of moral training, where women formerly held sway. Rampant crime, child abuse, kidnapping, and the dramatic rise in violence against women are symptoms of a society gone amok, where many people have no concept of right and wrong, of honesty, fairness, compassion, or self-control. Only a generation ago, American stores did not have security devices or guards checking bags at every exit; the prevalent sense of honesty made shoplifting a rare occurrence. Such basic morality now seems as outdated as propeller planes or fishnet stockings.

Today's internal decadence is eroding the quality of life in America as fast as external political and technological advances are improving it.

Clearly, the lot of women cannot be improved by political and financial progress if the inner dimension of society -- its morals and compassion -- is neglected by the very people who have traditionally been its custodians: women.

A typical male analysis of such societal problems customarily blames them on external factors, e.g., low income families with many children in impoverished neighborhoods inevitably leads to a high rate of violent crime, substance abuse, etc.

If this were true, then Jerusalem's religious neighborhood of Mea Shearim, which has one of the highest poverty rates in Israel and where families typically number seven to ten children in a three-room flat, should be a hotbed of violent crime. Instead, Mea Shearim has virtually no violent crime and very little substance abuse, this despite the total absence of policemen on its streets.

A materialistic society, one which recognizes only that which can be counted and measured (income, titles, degrees, etc.), is bound to discount the imponderables such as compassion, courage, and selflessness, which ultimately determine the fiber of its citizens. Almost none of the heroic Gentiles who risked their lives to hide Jews during the Holocaust were people of stature, wealth, or academic achievement. Most of them were simple people whose mothers had imbued them with lofty morality. Thus, typical answers to the question "Why did you risk your life and the lives of your family to hide Jews?" were: "My mother taught me to help people who are suffering," or "My parents taught me that no one should be persecuted for his religion."

The wielding of internal power, while rarely accompanied by impressive titles or salaries, has a deeper, longer-lasting effect than the external power maneuvers of those who dominate the nightly news.

Ultimately, the people who have had the most significant effect on who you are today are not the President of the United States and the Chief Executive Officer of Bank of America, but your parents, teachers, and childhood role models -- the people who influenced your internal development. The wielding of internal power, while rarely accompanied by impressive titles or salaries, has a deeper, longer-lasting effect than the external power maneuvers of those who dominate the nightly news.

Women are the most proficient wielders of internal power because of their preponderance of insight, the intellectual vehicle of entering the very heart, mind, and soul of the other person. Insight accounts for mothers usually being able to understand the differences in their children more readily than fathers; for women historically being the pioneers in establishing orphanages, mental hospitals, and homes for the retarded; and for the no doubt accurate feminist claim that if women ran the world there would be fewer wars. The ability to view events in terms of their human cost rather than their political ramifications derives from insight.

The Bible is full of accounts of great women whose exercise of internal power had decisive effects on Jewish history.

Sarah understood the negative moral impact of Ishmael's example on Isaac. She insisted that he be sent out of the household, which Abraham could not bring himself to do until God emphatically told him, "In all that Sarah says to you, hearken unto her voice." Commentaries on this verse state that Sarah was a greater prophet than Abraham, for she could see the long-range moral corruption that could jeopardize future generations of the Jewish people through exposure to a violent and ruthless example at a formative stage.

Rebecca also clearly intuited the inner make-up of her twin sons, and took a decisive, even deceptive, step to insure that her husband's blessing would go to the son more fit to carry the mantle of the Patriarchs.

The sages of the Talmud (that portion of Jewish law that was originally oral but is now written) credited the redemption from Egypt to the merit of the "righteous women," who, against the judgment of their husbands, saw that they must continue to procreate despite Pharaoh's death sentence on all Jewish male babies. In all these delicate situations, the women's ability to perceive the reality of a person or situation determined the course of Jewish history.

Thus, defined Judaically, the issue is not whether women should or should not have power, but rather on the kind of power on which they should concentrate, both for their individual development as well as for the good of the whole society. This choice is almost totally hidden from women in secular society. Little wonder that those who aspire to grow in an externally directed culture should define their success in terms of external roles and quantifiable achievements. The challenge of excelling in an inner domain is not only unrewarded by their society, but is virtually unrecognized as a possible pursuit. It is not just that the inner race offers no prize money; it is not even listed in the daily double.

Beneath the Surface: A Deeper Look at Modesty

Girl Power?
Scientific Curiosity and the Divine Encounter
Mind Over Milkshakes
Love the Convert
Comments
MOST POPULAR IN Current Issues
Our privacy policy
Aish.com Is Looking for Great Writers