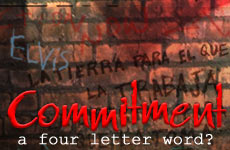 Fear of commitment is epidemic. But you need to face that fear and conquer it.

I have looked fear in the face... and then it turned and ran.

Come to think of it, actually, it looked a lot like my ex-boyfriend.

This is not an unusual experience. Unless you were married off at the ripe old age of 21, chances are you've encountered a dating partner who is terrified of commitment -- or you've discovered it in yourself.

It shouldn't be surprising.

There's a not-so-subtle cultural undercurrent that tells us that what is new (be it the latest-model Palm Pilot, sunglasses, or boyfriend) is better.

We're encouraged to want it all and, more saliently, to believe that "getting it all" is possible.

We tend to relate to one another in the cadences of sitcom humor, attaching nicknames to people we date as if they were recurring characters on "Seinfeld" and can be dispatched just as quickly, with no regrets (since they'll probably land their own sitcom or at least get a career bounce from being known as "the girl with the big hands").

We're subtly encouraged to think that we can find -- and deserve -- a guy with washboard abs -- who doesn't spend all his time in the gym; a woman with a fantastic, demanding career -- but of course we're her priority; or a man who dresses with perfect style and panache -- yet isn't the slightest bit vain. Along the way, no one bothers to mention that all of this is highly unlikely.

No one tells us that finding the perfect person is highly unlikely.

Plus, there's not much of a societal imperative to settle down anymore. And that lets us flit from relationship to relationship without much self-evaluation.

You can be in the throes of a wacko case of commitment phobia and not really even realize it for years.

But then all of a sudden you do.

Were you ever in a relationship and you suddenly feel as if the walls are closing in on you?

As with any phobia (fear of heights, for instance), your body may produce a physical reaction to an emotional response.

Your heart starts to beat fast. You feel panicky and anxious. Your stomach aches.

There is a very real sense of fear.

Run away from the thing -- the person -- causing that response.

And like a helpless chipmunk escaping a bobcat, you then feel sense of relief.

And you hold onto that relief to validate your –- totally rational, intellectual -- conclusion that terminating the relationship was the right thing to do.

There's only one problem: you're not a chipmunk.

SIT WITH YOUR FEAR

It's entirely possible that your chipmunk-bobcat union was, in fact, not right. But you can't possibly judge that when you're in the grips of a fight-or-flight instinct.

Your response came from anxiety.

Anxiety is an emotion that passes.

And you have to resign yourself to the fact that anxiety and other uncomfortable feelings are a part of any real relationship.

You are not a chipmunk and dating shouldn't be Darwinian.

Once you reach the level where that meaningful connection is turning into commitment, it can be simply terrifying.

The fear can grip both partners at different times.

A friend of mine who knew she had commitment issues nearly ran out of a restaurant when a boyfriend first brought up commitment. He actually used the m-word -- something like "we need to decide if we are moving toward marriage."

She looked around in a panic, thinking, "Check, please!"

But she forced herself to stay in her chair. They had a long talk and she felt they came closer together.

It was a visceral reaction to how much was being given up without seeing what would be gained.

When he brought it up again a few weeks later, she pressed herself into her seat and had to concentrate on pacing her breaths to combat her racing heart.

It had nothing to do with how she felt about him.

It was a deeply visceral reaction to the notion of being pinned down, to how much can be given up, without seeing how much is to be gained.

Ironically, months later after the commitment had been initially made, the boyfriend fled.

My friend understood that most of her commitment issues were related to baggage she was carrying around from the past. So while they were dating, she worked on addressing those fears, and especially not allowing them to interfere with their relationship.

During her moments of panic, she stayed put and tried to figure out what she was feeling and what, specifically, was frightening her. She later sorted these feelings out with a trusted, older friend.

What you want and what you need aren't necessarily the same thing.

The boyfriend's approach was less seasoned.

He was emotionally present while they dated -- a really good guy at heart -- but some time after they committed to each other, suddenly decided that "something didn't feel right." Without much more of an explanation, he broke it off, declining to go with her to speak to someone about it.

It's entirely possible that they weren't meant for one another and that, in the end, he was right. But the fact that he wasn't willing to go talk to someone about their relationship suggests that his decision was fear-based.

My friend understood that she lacked the perspective to sort through the complicated emotions that go along with relationships -- particularly when commitment issues are involved.

Be wise about who you seek to help you.

Don't go consulting your cubicle mate who thinks "Sex and the City" is a source of meaningful wisdom. Seek help and guidance -- preferably before panic sets in -- from a rabbi, counselor or someone else reasonably sagacious.

Be aware that some of the best-intentioned friends often can be more harm than help. They want the very best for you -- but may be caught themselves in the 100-percent-or-nothing bracket.

Some friends of mine have never understood how one friend "settled." The guy she picked is not a career superstar, nor the life of the party. He's just a caring, decent man who loves her very much. They thought she should hold out for someone better: flashier, wittier, wealthier... closer to perfection.

Of course, she's happily paired off... and the rest of us are still looking.

No, no one is advocating that we "settle."

But if that is "anything less than perfect," guess what? We're going to have to settle.

We all date with heads full of fantasies, with edited memories of past loves by which we measure the current one. We're looking for the perfect one: with Fred's sense of humor, Ted's sensitivity, Ed's earning power, and Ned's perfect physique.

(But without Fred's need to be the center of attention, Ted's touchiness, Ed's disappearing acts, or Ned's self-absorption.)

Maturity means forming a long-lasting bond with the unique and very human and imperfect person you've chosen. It means focusing on the long-term, not the short-term foibles that seem larger and larger as you get more and more scared.

Beware the Pimple Principle. You know how sometimes you don't even notice a blemish on someone's face, but then once pointed out, it's all you see?

When you're not scared about a relationship, you don't even notice the tiny bit of peach fuzz on your girlfriend's upper lip. When you are, she starts to look like the Motorcycle Guy from the Village People.

When you're relating normally, your boyfriend's tendency to tell silly jokes is endearing. When you're in flee mode, it's a waving red flag of driphood. And why oh why, would you stay with a drip?

My friend who conquered her fear of commitment was able to sort through the real fear issues from those that were unimportant or anxiety-driven. She knew why she was dating and knew what she wanted in a partner.

Responsible, thoughtful daters figure out what they want and what they need (they're not necessarily the same thing). And if they start feeling panicky, they go talk to someone to sort it through.

Vague generalities are warning signs. "Something isn't right" is not a good reason to end a relationship. "I don't think he would be a good father" is. "Something is missing" isn't. "Our long-term goals are not incompatible" is.

The fear-conquering friend knows now that, however things ended with the fearful beau, she has the sense of achievement and pride that comes with conquering the obstacle of her own fear.

Along with all the other downers when we give in to fear-inspired flight, is what happens to the other person. My friend triumphed over panic, but the good-at-heart boyfriend broke her heart.

That's a heavy price to pay because you're afraid to stare down fear.

The author's name is a pseudonym.

Does Love Conquer All?
Deep Breaths
What Happened to the Truth?
The Japanese Everything Bagel Spice Recipe
Comments
MOST POPULAR IN Dating
Our privacy policy