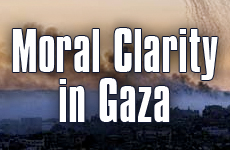 Hamas has only one grievance: Israel's very existence.

Some geopolitical conflicts are morally complicated. The Israel-Gaza war is not. It possesses a moral clarity not only rare but excruciating.

Israel is so scrupulous about civilian life that, risking the element of surprise, it contacts enemy noncombatants in advance to warn them of approaching danger. Hamas, which started this conflict with unrelenting rocket and mortar attacks on unarmed Israelis -- 6,464 launched from Gaza in the past three years -- deliberately places its weapons in and near the homes of its own people.

This has two purposes. First, counting on the moral scrupulousness of Israel, Hamas figures civilian proximity might help protect at least part of its arsenal. Second, knowing that Israelis have new precision weapons that may allow them to attack nonetheless, Hamas hopes that inevitable collateral damage -- or, if it is really fortunate, an errant Israeli bomb -- will kill large numbers of its own people for which, of course, the world will blame Israel.

For Hamas, the only thing more prized than dead Jews are dead Palestinians.

For Hamas, the only thing more prized than dead Jews are dead Palestinians. The religion of Jew-murder and self-martyrdom is ubiquitous. And deeply perverse, such as the Hamas TV children's program in which an adorable live-action Palestinian Mickey Mouse is beaten to death by an Israeli (then replaced by his more militant cousin, Nahoul the Bee, who vows to continue on Mickey's path to martyrdom).

At war today in Gaza, one combatant is committed to causing the most civilian pain and suffering on both sides. The other combatant is committed to saving as many lives as possible -- also on both sides. It's a recurring theme. Israel gave similar warnings to Southern Lebanese villagers before attacking Hezbollah in the Lebanon war of 2006. The Israelis did this knowing it would lose for them the element of surprise and cost the lives of their own soldiers.

That is the asymmetry of means between Hamas and Israel. But there is equal clarity regarding the asymmetry of ends. Israel has but a single objective in Gaza -- peace: the calm, open, normal relations it offered Gaza when it withdrew in 2005. Doing something never done by the Turkish, British, Egyptian and Jordanian rulers of Palestine, the Israelis gave the Palestinians their first sovereign territory ever in Gaza.

What ensued? This is not ancient history. Did the Palestinians begin building the state that is supposedly their great national aim? No. No roads, no industry, no courts, no civil society at all. The flourishing greenhouses that Israel left behind for the Palestinians were destroyed and abandoned. Instead, Gaza's Iranian-sponsored rulers have devoted all their resources to turning it into a terror base -- importing weapons, training terrorists, building tunnels with which to kidnap Israelis on the other side. And of course firing rockets unceasingly.

The grievance? It cannot be occupation, military control or settlers. They were all removed in September 2005. There's only one grievance and Hamas is open about it. Israel's very existence.

Nor does Hamas conceal its strategy. Provoke conflict. Wait for the inevitable civilian casualties. Bring down the world's opprobrium on Israel. Force it into an untenable cease-fire -- exactly as happened in Lebanon. Then, as in Lebanon, rearm, rebuild and mobilize for the next round. Perpetual war. Since its raison d'etre is the eradication of Israel, there are only two possible outcomes: the defeat of Hamas or the extinction of Israel.

Israel's only response is to try to do what it failed to do after the Gaza withdrawal. The unpardonable strategic error of its architect, Ariel Sharon, was not the withdrawal itself but the failure to immediately establish a deterrence regime under which no violence would be tolerated after the removal of any and all Israeli presence -- the ostensible justification for previous Palestinian attacks. Instead, Israel allowed unceasing rocket fire, implicitly acquiescing to a state of active war and indiscriminate terror.

Hamas's rejection of an extension of its often-violated six-month cease-fire (during which the rockets never stopped, just were less frequent) gave Israel a rare opportunity to establish the norm it should have insisted upon three years ago: no rockets, no mortar fire, no kidnapping, no acts of war. As the U.S. government has officially stated: a sustainable and enduring cease-fire. If this fighting ends with anything less than that, Israel will have lost yet another war. The question is whether Israel still retains the nerve -- and the moral self-assurance -- to win.

Raising the Children of Terrorists

Ramping Up the Violence
The Blue Beyond
Great Place to Live
Is Eating Supposed To Be Spiritual?
Comments
MOST POPULAR IN Israel
Our privacy policy