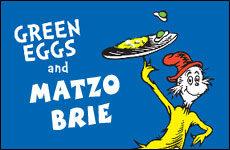 I have a theory that Dr. Seuss was one of those Righteous Gentiles who helped hide the Jews – between the lines of his prose.

My children have long outgrown Dr. Seuss. I have not. Nor do I plan to. Recently, I dug up my roots and read Dr. Seuss. (Did you catch that almost-rhyme?) Funny how you can read a book many times and still find something new.

Contrary to popular opinion, Dr. Seuss, a.k.a. Theodore Geisel, wasn't Jewish. However, he was a loyal friend to our people, frequently speaking out against discrimination toward Jews. My theory is he was one of the Righteous Gentiles who helped hide the Jews—between the lines of his prose! Maybe it's just me, but as I revisited his books, it seemed all-things-Jewish popped up in the strangest places, and I didn't even read the pop-up version. Like an I Spy Jews book, I turned page after page shouting, "I found one!"

You probably think I'm reading things into that ample white space. I hear you muttering under your breath: Thanks to Woody Allen, here's another one who thinks paranoid-neurotic is Jewish-chic! I don't think I'm imagining anything, Jew know? All right, you decide.

Perhaps those big floppy ears muffled the words and he heard, "Green eggs and lamb."

Nice Jewish Boy is cajoled into eating treif, but he remains strong. Unrelenting. "I will not eat green eggs and ham! I will not eat them, Sam I am!" At the end, he caves in. He eats the eggs, he eats the treif, violating basic laws of kashrut if only to get rid of the runt in the banana dress. I'd like to think he forgot to wear his hearing aid. Perhaps those big floppy ears muffled the words and he heard, "Green eggs and lamb." Otherwise, I'm sure he would've resisted. Personally, it disturbs me that the story ends here, so I've taken the liberty to write a new ending:

I did give in,
I made a sin
I ate the treif
It was not safe
You may abhor
this Jewish bore.
Thank G-d there's always
Yom Kippur!

You know that old chozzer who hovers around the food table after the bar mitzvah? Yeah, that one. He scarfs down the honey cake before the service is over. He crashes the reception and loads his pockets with challah and hors d'oeuvres. No one knows him, who invited him, or whose side of the family he's on, but he answers to Marvin. It's rumored he was sent by the Cat in the Hat and his real name is Thing. A typical conversation with the respective hosts goes something like this: "Marv, you really need to go. Enough already. All right, have yourself some chicken. Sure, help yourself to kugel, but then you must go. Please. Go! NOW!"

Would You Rather Be a Bullfrog?

For all the Jewish children who wish they'd been born anything else. "It could always be worse!" you tell them. "Just be thankful you weren't born a bullfrog. What, with those bulbous eyes? At least we can get your nose fixed, but there's nothing you can do for eyes. Nothing!"

I Can Lick 30 Tigers Today and Other Stories

This book's theme could've been last year's conversation at Passover dinner.
"So Irv, how's your diabetes?"
"How should it be? I suffer."
"You think you suffer? Oy, I had such an operation. They took out all my plumbing."
"That's nothing. You should see my operation. I nearly died on the table."
You think that's something? I DID die on the table. They put that defibrilator thing on my chest and oy! They pummeled me to death, which is why I'm alive today, kinahora.

How The Grinch Stole Christmas

The Grinch was tired of being the only Jew in Whoville. If he'd had his druthers, he'd have turned Whoville into Jewville. Being a Grinch, he gave expression to his inner grouch and ruined Christmas. By the end of the story, Whos for Whosis got to him and he joined their ranks. Oh, well. Maybe we didn't want him anyhow. On the other hand, his heart did grow several sizes bigger. A sequel perhaps? This time, Whos for Whodaism work hard to help the Grinch return. It's only a matter of time before all that smiling hurts his cheeks and he longs for the days of a good kvetch fest.

Mr. Brown Can Moo Can You?

Not only can't I moo, but I'm certain Mr. Brown can't either. See, I knew Mr. Brown personally. He was my Uncle Harry, may he rest in peace, and not once did I hear mooing come out of the mouth of that man. Nu, nu, that was no moo. That's when Uncle Harry blew . . . the shofar! Gut yontiff!

We're everywhere. And why not? I had a hunch this was true before revisiting One Fish Two when I'd passed through Hot Springs, Arkansas, and found a thriving Orthodox community. So why wouldn't such a community find a place in this darling book, as in this passage?

There we are, walking home from shul after Friday night services. Seems we're misunderstood, but what else is new? My point, though, is expressed so succinctly in these next lines:

From there to here
from here to there
Jewish things
are everywhere.

What's that you say? I changed a word? Oh, just one teensy-weensy. All right, so "funny" things are everywhere. Funny things, like Woody Allen, and Jerry Seinfeld. How about Groucho Marx, and Jackie Mason? Funny! Jewish! What's the difference?

You get the point. Jews are found in some of the strangest places. Coincidentally, that's the theme of Seuss's, "Oh, The Places You'll Go!" That is what it's about . . . Isn't it?

How to Make Thanksgiving More Jewish