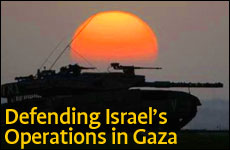 A quick guide to some of the big issues.

This week, Israeli warplanes pounded Hamas strongholds in the Gaza Strip. The goal of the operation is to strike a major blow to Hamas's terror infrastructure and the ability of Hamas and its allied organizations to launch missiles and mortar shells at Israeli citizens and execute terror attacks of various kinds, such as kidnapping Israeli civilians.

As casualties mount, media coverage of the fighting will form public opinion, ultimately determining Israel's ability to complete the necessary operation. Following is a quick guide to some of the big issues.

Why is Israel bombing Gaza when innocent civilians are being killed?

Israel never targets civilians. The death of innocent civilians is regrettable under any circumstances and every effort is made to avoid civilian casualties. That imperative must be balanced with the need to protect Israeli civilians, who suffer from ongoing attacks from Gaza. But while the Palestinians fire Kassam rockets indiscriminately into Israeli territory, Israel launches pinpoint strikes at Hamas infrastructure. Prior to launching any large-scale attacks, Israel spent many months identifying Hamas' strongholds and training facilities. The Israeli Air Force also managed to hit "secret" targets such as underground missile launchers and arms caches – a testament to Israel's great effort to ensure that air strikes weaken Hamas without harming innocent Palestinians.

Israel does not want a humanitarian crisis, and Hamas is the cause of the suffering and distress of the population there.

Unfortunately, Hamas has never shown the same level of concern for either Israeli or Palestinian civilians. On one hand, Hamas has fired thousands of missiles into Israeli territory, killing and wounding hundreds.

On the other hand, rather than seeking the well-being of the Palestinians under its control in Gaza, Hamas has exploited its civilian population – and Israel's reluctance to cause civilian casualties – by placing non-combatants in and around areas likely to be targeted by Israel. Hamas brings women and children up to the roofs of buildings housing terrorist activity in an attempt to prevent air strikes; it sends civilians to the line of fire; it works out of schools and mosques; it fires rockets out of crowded population centers; and it sends Palestinian mothers to murder Israeli children in suicide attacks.

In addition, many of Hamas' arms smuggling tunnels are hidden beneath the homes of Palestinian civilians.

This cynical use of human shields is illegal under international law and the cause of many needless Palestinian deaths. Therefore, the responsibility for Palestinian civilian casualties lies with Hamas, not Israel.

The number of Palestinians casualties is much higher. Isn't that proof of Israeli wrongdoing?

The reason that Israel suffers less casualties is because it has a superior army, and has spent millions of dollars on civil defense infrastructure (neighborhood bomb shelters, reinforced concrete playgrounds for children, etc.).

Also, Israeli hospitals are well-equipped to handle the wounded. Not just Jews, but Gazans, too! In Ashkelon's Barzilai Hospital, "dozens of Gaza Arabs are being treated... at the same time terrorists are bombarding the city." ("Israeli Hospital Cares for Sick and Injured Gaza Arabs," by Tzvi Ben Gedalyahu, Israel National News, December 29, 2008)

By contrast, in the Gaza hospitals, "armed Hamas militants in civilian clothes roamed the halls" where they shot and killed other Palestinians. ("No Early End Seen to 'All-Out War' on Hamas in Gaza," by Ethan Bronner and Taghreed El-Khodary, New York Times, December 29, 2008)

Shockingly, Hamas is not even allowing wounded Palestinians access to medical treatment. "We are waiting for the wounded Palestinians to cross. They are not being allowed to cross," Egyptian Foreign Minister Ahmed Aboul Gheit told reporters. Asked who was to blame, he said: "Ask the party in control on the ground in Gaza." ("Egypt: Hamas denying Gaza wounded treatment in Egypt," by Alaa Shahine, Reuters, December 28, 2008)

It is absurd to assign the "moral high-ground" to he who suffers the most causalities. By this yardstick, during World War Two the Axis forces would be considered the "victims" against the Allied "aggressors."

Isn't Israel's operation a violation of the Hamas truce?

Hamas is responsible for the situation, since it violated the calm, is firing against and attacking Israeli citizens, and is investing all its resources in arming itself and gathering power.

The truce brokered by Egypt was exploited by Hamas not only to employ terror against Israel's citizens, but also to gain strength and massively arm itself with the intention of increasing their capacity for terror and expanding the range of the threat against Israeli citizens. Hamas men were being smuggled out and were being trained in Iran and Syria.

The Palestinians have long cultivated an image of victimhood to win world sympathy and demand Israeli restraint in the face of Palestinian aggression. In reality, the Palestinians' so-called "primitive" Kassam rocket has killed and wounded hundreds of Israeli civilians. The number of casualties would be even higher without Israeli security measures such as early-warning alarms in areas under rocket threat that allow Israelis to escape into bomb shelters. Hamas has also fired medium-range Grad-type Katyusha rockets, placing more than 250,000 Israeli civilians under direct threat of rocket fire.

Given the Palestinian fire power and their willingness to use it, it is clear that the charge of "excessive force" is simply the latest incarnation of the Palestinian strategy of "victimhood." Terror groups fire indiscriminately at innocent Israelis and then complain of excessive or disproportionate force when Israel fires back. But according to internationally accepted laws of war, Israel is permitted to respond with the force necessary to end the conflict.

It is also important to examine the intent behind the use of weapons. Palestinian terrorists do everything in their power to hurt or kill as many Israeli civilians as possible; Israel is using its advanced weaponry to protect Palestinian civilians from harm.

Isn't Hamas entitled to defend its territory against Israeli occupation?

Israel withdrew completely from the Gaza Strip in 2005, uprooting thousands of its own citizens in order to uphold internationally-recognized borders in Gaza. The Palestinians have no further territorial claims against Israel in Gaza. But instead of working to improve the quality of life for its citizens, Hamas has focused on improving the range and accuracy of its Kassam missiles and mortars and increasing its store of weapons. The Palestinian rockets, therefore, can only be seen as aggression against Israel with no moral basis.

Palestinians have fired more than 6,000 rockets and mortars into Israel since the Israeli withdrawal – all without provocation. The rocket fire even continued during the six-months of "calm" in the Gaza area that ended last Friday. Since then, Hamas stepped up rocket fire substantially, launching 170 rockets at Israel over eight days, an average of more than 20 rockets a day.

No country in the world would allow this type of onslaught against its citizens. As President-elect Barack Obama said during his visit to the rocket-battered town of Sderot five months ago, "If someone was sending rockets into my house where my two daughters sleep at night, I would do everything to stop that, and would expect Israel to do the same thing."

Isn't Hamas the democratically-elected government in Gaza? Why is Israel trying to overthrow it?

Hamas steadfastly refuses to recognize Israel and continues to launch attacks on its neighbor. Since Hamas refuses to live in peace with Israel, the Israeli government has no choice but to seek Hamas' replacement.

Key facts In The Mideast Conflict

We Didn't Start the Fire

Anti-Globalization: The New Anti-Semitism
The Promise Of The Land
Which Chat Are You On?: Parshas Behar/Lag Ba’Omer
Do You Like Slow-Cooked Food? Thank the Jews
Comments