Not In Kansas Anymore 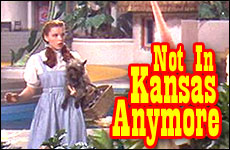 Somewhere over the rainbow I landed in the land of Israel

Growing up in the sixties, I, like countless other youngsters, looked forward to that special Sunday evening every spring when The Wizard of Oz would be aired on television. I clearly remember the Monday mornings following the special viewings. No teacher would dare to teach a normal lesson without first allowing discussion time for the movie. I don't know if that happened in other schools across the country or only the ones in my state. We were special. Like Dorothy, Kansas was our home.

But unlike most of my classmates, Kansas had not been my family's home for generations. My maternal grandparents had been born in Europe and slowly made their way to Leavenworth, Kansas. My father had fled Nazi Germany in 1937 and came to Wichita where he met my mother.

Also, unlike my classmates, I did not see my future in Kansas. Before I even understood what college was my mother had already begun indoctrinating me to go to an out-of-state university. She knew my chances of getting married in college were great and there were very few Jewish students in the Kansas universities.

So at the age of almost 18, I left home and went over the rainbow -- all the way to Arizona, without even a dog to keep me company.

I was homesick in the beginning. After a short time, though, as my mother had envisioned, I met the man who would become my husband. Together we began learning more about our Jewish heritage. We both started keeping kosher and Shabbat. When we were married we decided to make our home in Phoenix and joined the small Orthodox community there. We lived there for 12 years and then we decided to make aliyah.

Yes, I was going home to the land of Israel, but I was leaving behind my parents.

I will never forget that day in 1986 at the Wichita Airport. Kissing my parents good-bye was one of the hardest things I had ever done. I felt like Dorothy saying farewell to the lion, tin-man, and scarecrow. Yes, I was going home to the land of Israel, but I was leaving behind my parents. My parents! Our relationship could not even compare to the friendships Dorothy had with her friends in the Land of Oz.

There were many adjustments to make to our new life in Israel. As time went on, our Hebrew improved, we began liking new foods, and we found the community of Shilo in which to make our home. Everything seemed to get easier each year except for one thing, which was no small matter: our parents. It became harder and harder for them to travel.

My husband and I would take turns visiting them, usually with one child in tow. Every time my visit ended I would remember that scene from the Wichita airport in 1986. Only now Dorothy's words, said right before she clicked her heels together three times to go home, would run through my head. "Oh, it's going to be so hard to say goodbye. I love you all, too."

I learned through the years to control my tears as I said good-bye to my parents. Each time I boarded the plane I felt a mixture of guilt for leaving them and longing for my home. I would wish that I could just click my heels together and be there. Each time after I landed at Ben Gurion, more of Dorothy's words would run through my mind. "Toto, we're home, home and this is my room and you're all here and I'm never leaving here ever, ever again because I love you all."

How I wished I would never have to leave ever, ever again. My mother died in 2000 and I missed not being able to visit her. I tried to talk my father into joining us in Israel. He was afraid to make such a major change and stayed alone in his house until 2007 when the doctor told him he had only a couple months to live.

We brought my father to Shilo to live with us. After 20 years of seeing his daughter and grandchildren only sporadically my father was seeing us daily. Perhaps it was all the love he received here that proved the doctor wrong. Instead of a couple of months my father had 11 very special months with us.

Some Jews have the privilege of living here. Others have the honor of being buried here.

My father was buried in the Shilo cemetery in a funeral well attended by friends, neighbors, rabbis, and his family, and I was faced with a problem once I finished sitting shiva. My mother and father had been a most devoted couple. They belonged together side by side for eternity. So I began the process of bringing my mother here for reburial.

It was not easy -- the process would be complicated and expensive. It was my uncle who urged me to go through with the plan.

Eight years and one day after my mother died she was reburied next to my father in the Land of Israel. Some Jews have the privilege of living here. Others have the honor of being buried here. There are those who will only come at the end of days with the resurrection of the dead.

It would have been nice if I could have had generations of family in Israel as my non-Jewish playmates had in Kansas. For centuries that was not a reality for Jews. But now it is. We can all come home. Like Dorothy said at the end of the film, "There's no place like home."

Israel Calls
For Every Individual, A Torah Scroll
Allegiance To The Monarch
Meet the Real You: Yom Kippur
Comments
MOST POPULAR IN Israel
Our privacy policy
Aish.com Is Looking for Great Writers