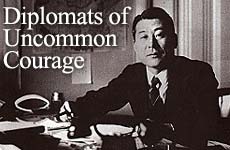 Diplomacy played a shameful role in paving the way for the Holocaust. But there were a few diplomats who displayed extraordinary moral courage.

Who, thinking of heroes, thinks of diplomats? "Diplomats were invented simply to waste time," an exasperated David Lloyd George once remarked -- and, he might have added, to dissemble, to defend the indefensible, to procrastinate, to hide behind jargon, to steer clear of moral judgment, and to never take risks. It takes certain skills to be a successful diplomat, but courage is not commonly thought of as one of them.

What brings these thoughts to mind is "Visas for Life", a deeply moving exhibit that tells the story of 48 diplomats in Nazi Europe who risked their careers and sometimes their lives to rescue Jews and other refugees during the Holocaust. The exhibit has already traveled to more than 100 venues worldwide; it is now at the Boston University Gallery on Commonwealth Avenue, where it can be seen through Nov. 6.

The message to Hitler was clear: The world would do nothing to save Jews.

Diplomacy played a shameful role in paving the way for the Holocaust. In July 1938, facing a rising flood of Jewish refugees from Nazi Germany and Austria, diplomats from 32 nations met at Evian, France, to agree on a solution to the crisis. What they agreed was that none of them would help. The tone was set by the United States, which announced that it would accept just 27,370 immigrants per year -- its existing quota for Germany and Austria. Virtually every country in Europe and Latin America followed suit. The message to Hitler was clear: The world would do nothing to save Jews.

And nothing was what most of the diplomatic corps did. As the Nazis began deporting the Jews of Austria to Dachau and Buchenwald that summer, thousands of desperate families besieged the 55 foreign consulates in Vienna for help. At 54 of them, the doors were closed. The French refused to accept visa applications. A sign at the British consulate advised that no visas were being issued. Swiss diplomats actually stamped the passports of Jews with a red 'J' to keep them from crossing the border.

They were only following orders, of course. To have done otherwise would have been to violate their governments' policies and be seen as insubordinate -- behavior most undiplomatic.

Only the Chinese consul in Vienna had a higher priority than diplomatic punctilio.

Only Feng Shan Ho, the Chinese consul in Vienna, had a higher priority than diplomatic punctilio. Shocked by the Nazis' brutality, appalled by Austria's embrace of Hitler, he determined to do what he could to help Jews escape. Between 1938 and 1940, he wrote thousands of entry visas, the critical document refugees needed in order to leave Austria. The final destination shown on Ho's visas was Shanghai -- a city that in fact required no entry visa. But with that piece of paper in hand, fleeing Jews could obtain transit visas through other countries, and eventually make their way to safety.

Saving refugees' lives meant flouting Chinese government policy, for Chiang Kai-shek, the Nationalist Chinese ruler, was an admirer of the Nazis. It meant angering Ho's superior, Ambassador Chen Jie in Berlin, who at one point angrily phoned and ordered him to stop writing visas. A traditional diplomat would never have put himself in such a position. Ho, impelled by conscience and compassion, couldn't help doing so.

"Visas for Life" is decidedly low-tech: wall-mounted photographs and text. Its power is in the stories it tells -- stories of bravery and character, of ordinary men driven by extraordinary moral courage.

The legendary Raoul Wallenberg is here, of course. But so are others far less known:

* Harry Bingham, the US vice consul in Marseilles, who issued thousands of visas and letters of transit to Jewish refugees in direct violation of orders. He sheltered Jews in his home and escorted others over the French-Spanish border; at times he would even drive into concentration camps, confront the Nazi commandant with falsified US papers, and demand that Jewish prisoners be released into his custody.

* Chiune Sugihara, the Japanese consul in Kovno, Lithuania, who sacrificed his diplomatic career to save the lives of 2,500 Jews. Despite orders from Tokyo to issue no visas, he issued as many as he could write. Upon his return to Japan in 1947, he was fired from the Foreign Ministry. The reason given was "that incident in Lithuania."

* Carl Lutz, the Swiss consul in Budapest, Hungary, who came up with a masterstroke: the "Schutzpass," or protective letter -- a legally meaningless but visually impressive document declaring the bearer to be under the protection of the issuing government. He issued tens of thousands of these letters and hid Jews in safe houses all over Budapest.

At a time when more prudent men looked the other way, there were a few, a very few, who had the greatness to act. Who, thinking of heroes, thinks of diplomats? I do, now.

Misrepresenting the Jewish Refugee Rescue in the Philippines

The Last Two Nazis on Trial
It Takes A Lot Of Faith To Be An Atheist
How Instagram Brought Back This Nostalgic Soup
What Makes Eli Run?
Comments
MOST POPULAR IN Holocaust Studies
Our privacy policy