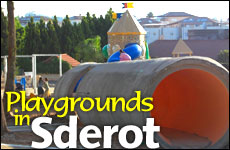 Welcome to the first playground in the world that is properly protected from falling rockets.

The other day in Sderot, I made an astonishing observation. Walking from the office after a long day at work to catch some sleep, I noticed I was not alone. Usually the city is deathly quiet once the sun sets, as parents refuse to let children play outside in the dark. Families prefer to remain at home together after a long day of siren alerts and rocket explosions.

High schoolers don't ride around as much with the music blasting and teenagers don't walk around listening to their iPods in case the "tzeva adom" red alert sounds. There's not much to do at night except maybe watch a movie and hope that Hamas rocket launchers decide to go to sleep, so that those of us living in Sderot can relax just a little bit. 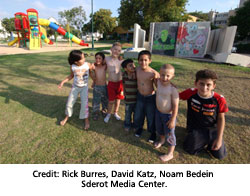 So naturally, I was surprised when I noticed people outside on the street. For the first time since I've come to work in Sderot, Israel, I am seeing moms walking around with their strollers and neighbors playing cards outside on the porch.

A playground is full of children shouting and playing -- that is one sight that makes me do a double take. Playgrounds are pretty much empty here.

Then I realized that this is the new playground that everyone is talking about -- the first playground in the world that is properly protected from falling rockets. There are heavy concrete tubes that children can run to when the siren sounds for protection. Moms are finally feeling that it is safe enough to let their children play at a playground. The children look like they are having fun.

I spoke to Orna Cohen, a local mom. "I can finally let my grandkids outside to play in this new playground when they come to visit me in Sderot," says Orna. "Usually I have to keep them pent up inside the house. It's nice to have a playground like this where the children can play somewhat at peace, but it's obviously not a solution to living with the rocket fire."

About 70 to 94 percent of Sderot children now show signs of post-traumatic stress disorder.

"I just want the rockets to stop for good so that we don't have to live for these little moments of quiet that are followed by terrible barrages of Qassams," says Orna.

In any case, the children of Sderot definitely deserve some kind of break. About 70 to 94 percent of Sderot children now show signs of post-traumatic stress disorder.

On another interesting note, at the Sderot Trauma Center, the director, Dr. Adriane Katz, reported that the number of cases of shock and panic among Sderot residents has only risen since the beginning of the year. "The cease-fire is giving families, especially parents and kids, a chance to breathe a little," says Katz.

"This is not a real calm, however, because we know the rocket fire will resume soon," says Katz. "Most people anticipate another heavy round of rocket fire based on what happened in the last cease-fire."

Indeed, over 300 Palestinian rockets were fired at Sderot from Gaza during the last Hamas cease-fire from November 2006 to May 2007. Since this cease-fire began on June 19, nine Qassams and mortar shells have been fired at Sderot and the western Negev communities in the past month.

It's also fairly obvious to everyone that this cease-fire has not prevented Hamas from stockpiling its weapons. In the last cease-fire, Hamas stockpiled more weapons and rocket material, and trained more soldiers to attack our troops. They are doing the same thing now. On Hamas's Ezzedeen Al-Qassam Brigades Web site, a senior Hamas official states that the calm is considered a victory for Hamas, a chance "to recharge power."
On the Hamas Web site, the terrorist group continues to call for the destruction of the state of Israel, glorifying terrorists as "martyrs." If Hamas can't actively fire rockets, then the regime can passively do so by preparing for the next strategic round of rocket fire. Who is fooling who?

Unfortunately and tragically, in the next round of events, it will be the residents of Sderot and the western Negev who pay a heavy price for this temporary calm. 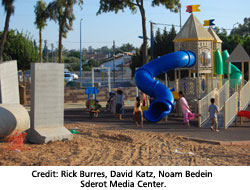 Although we are all enjoying this nice respite from the hell we've been experiencing this year — over 2,000 Qassams and mortar shells have hit the western Negev since January, killing four people and wounding hundreds — we know that the worst is being planned out now. How long will the Israeli government allow Sderot residents to act as pawns in Hamas's strategic game of rocket warfare?

Until next time … see you at the new playground.

Anav Silverman is a 2004 Calais High School graduate. She works in the Sderot Media Center and is a student at Hebrew University of Jerusalem and Bar Ilan University in Ramat Gan, Israel.

From Mother to Son
Chukat 5782: Let’s Play the Blame Game!
The Sin of Moses: The Two Ways to Communicate
In Aftermath of Chicago’s July 4th Shooting, Local Moms Provide Countless Points of Light
Comments
MOST POPULAR IN Israel
Our privacy policy