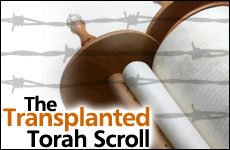 A Torah scroll's amazing journey from Germany to Israel.

If you attend services in Kedumim, a Jewish town 20 minutes from Tel Aviv, you may have the privilege of seeing the Torah scroll my Uncle Yosef rescued from a German farmer 20 years ago.

The story began as a near-tragedy. In the mid 1970s, my cousin Uri was diagnosed with kidney failure when he went for his pre-Army medical examination. For a while medication helped him, but he soon "graduated" to dialysis. Even then the doctors were adamant, "This young man will need a transplant sooner or later."

Uncle Yosef, his father, volunteered to donate a kidney. Yosef and his wife Geta lived in the village of Kfar Haro'eh near Netanya, where they raised their six children. He grew oranges and tropical fruit, working hard from early morning to late at night, but always managing to sit and learn Torah every day.

When their third child, Uri, needed a transplant, Yosef immediately offered his kidney and underwent the painful operation. Unfortunately, the donated kidney was rejected by Uri's body within 24 hours. All that suffering was apparently for naught. Aunt Geta suffered a heart attack, perhaps from aggravation and stress. All three members of the family were hospitalized together.

During her recovery, Geta began to write to every transplant center in the world, begging one of them to save her son. Very few even bothered to answer; the few that did gave disappointing replies. But Geta was desperate, so she tried desperate things. She remembered that as a child, growing up in a small town in southern Germany, she went to school with a boy who always boasted he would become a doctor. Without knowing his address, she wrote a letter, describing her son's situation, and mailed it to "XXXX, the son of the town butcher, Bad Mergenheim, Germany."

Miraculously, the butcher's son, now a doctor, did receive the letter and answered it. He remembered Geta and wanted to help. He was not a surgeon, but his friend was the director of a large transplant center in Germany. The butcher's son forwarded Uri's medical papers to his friend. Uri was accepted to the center in Germany and traveled there with his parents. They renewed their German citizenship to be entitled to free medical care.

It took a very long time until a suitable kidney donation turned up. More than a year passed and Uri continued getting dialysis at the center. Yosef started traveling around Germany giving talks on Judaism and on Israel. He also became an agent for AGRECCO, the Israeli firm for agricultural export to Europe.

On one of his trips he was approached by a man who had heard his talk. He chatted with Yosef about the Bible and mentioned in passing that his neighbor, a farmer in that town, had a Torah scroll which he had rescued from the town's synagogue when it was burned down by the Nazis in 1938. Yosef was immediately interested. He went to see the man and the Torah scroll, which had been kept in a box in his attic for over 40 years. The scroll seemed to be in surprisingly good condition; only the mantle was singed.

Yosef negotiated with the farmer and purchased the scroll for a sum of money. As he left the house with his precious possession, Yosef was overjoyed at the opportunity that had been given him -- to redeem a lost Torah from an attic in a small German town where no Jew had lived for four decades. 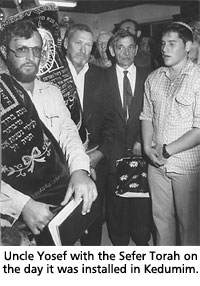 Uri eventually had his operation. The transplant this time was successful. The family returned to Israel, Uri married and had three children. Unfortunately, he died ten years ago. The Torah scroll was donated to Kedumim where Yosef and Geta's youngest daughter lives. The town was in dire need of a Torah scroll for their fledging synagogue. The Torah scroll needed only minor repairs to become useable.

Of all his life achievements, Uncle Yosef was proudest of the recovery of the Torah scroll. Whenever he visited Kedumim he always asked to read from the Torah scroll. "Just think," he would say, "about the amazing journey this sefer Torah took to find its way back home."

Zhidovka: A Jew in Ukraine

The Oldest Man in America

We Have Lost A Father
Deep Breaths
What Happened to the Truth?
The Japanese Everything Bagel Spice Recipe
Comments
MOST POPULAR IN Israel
Our privacy policy