One People, One Heart? 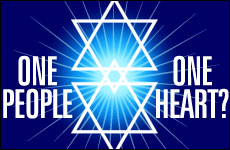 Let's unite on the first yartzeit of those eight innocent souls who were murdered during the Merkaz HaRav massacre.

"We are uniting worlds tonight," whispered Rabbi Y.B. Soloveitchik in the ears of the Lubavitcher Rebbe, as he brought some of his students from Yeshiva University to join in a Chabad 'farbrengin.' The Jewish World is like a jigsaw puzzle, with countless sects, denominations, and factions somehow meant to fit beautifully together, yet we are all too often divided and at odds with one another. Rabbi Soloveitchik seemed overjoyed to piece together a small portion of these scattered puzzle pieces. But his hopeful smile soon faded into tears, as the Lubavitcher Rebbe responded: "I'm sorry, my dear friend, but we'll never be able to unite the Jewish world as well as Hitler did."

This seems to be our habitual national tendency. "There is a certain people scattered and dispersed... let it be recorded that they be destroyed" (The Book of Esther 3:8-9). We "scatter and disperse" -- splintering off and dividing into sub-sects based on differences, until our enemies step in, brutally reminding us that we are not as different as we thought. We are not divided; we are one and the same -- we are Jews.

Hitler's bitter reminder didn't come with one chapter addressing Chasidim, another addressing Zionists, another for the 'Yeshivishe Velt,' another for the Modern Orthodox, and yet another for the 'Unaffiliated.' He saw a forest, not its trees, and he set fire to that forest with daunting intentions of national extermination. Yes, indeed, we were united -- in a way by which we hope never to re-experience.

Can we unite without the help of gas chambers and suicide bombers?

Does it take a Haman or a Hitler to break down the walls of division and disassociation? Is there another way?

When I saw my brother handing out flyers that read: "B'lev Echad (with one heart) -- Jews around the world join for a historic celebration of Jewish unity " -- I couldn't help but roll my eyes, in a polite, encouraging way, of course. As any good older brother would do, I told him he was wasting his time. Jews like to do a lot of things, but "uniting harmoniously" isn't exactly one of our more frequent endeavors. An attempt to breach denominational boundaries to celebrate Jewish unity seemed to me a fanciful stretch, to say the least.

But, then again, isn't God eagerly awaiting our self-motivated attempts to unify His beloved Family, regardless of our minute differences? Wouldn't God shep nachas, as it were, from even the most delicate attempt to see past our fine-line differences and particularities sans the encouragement of our enemies?

I understand the complicated nature of ideological differences, made all the more acute when matters of Jewish law come into play. Nevertheless, upon some honest soul-searching, it seems to me that subtle specks of ego and insecurity fuel some of the bitter throes of resentment, irritation, and finger-pointing which characterize our strife and disunity.

Tendencies to condemn, nit-pick, and blame as a defensive means to conceal and alleviate personal insecurities are weaknesses that I understand; after all, they are my own. I'm no all-loving, all-accepting super-Jew, inviting you all to join me in congenial embrace. But I do believe that we can gradually surpass our insecurities, overcome our inadequacies, and -- slowly but surely, one Jew at a time -- flourish in our eternal journey together.

Jews around the globe will participate in a worldwide completion of the Talmud, as eight Torah Scrolls will be dedicated to the families of terror victims.

Call it naive, call it far-fetched, call it idealistic. B'lev Echad may have lofty aspirations, but it's a start. The B'lev Echad event is a novel concept, inspired by the first yartzeit of those eight innocent souls who were murdered in cold blood during the Merkaz HaRav massacre. Eight young lives were shattered for one reason: they were Jewish. Their slaughterer was not concerned about 'how Jewish' or 'what type of Jewish' his victims would be. Simply being a Jew was enough for murderous acts of hatred. should it not be enough for consoling love?

Jews around the globe will participate in a worldwide completion of the Talmud, as eight Torah Scrolls will be dedicated to the families of terror victims.

Free from the contamination of political orientation, Jews are uniting for what has been, and always will be, our common ground -- the Torah.

One by one, Jewish schools and communities around the world -- spanning across denominational realms -- have signed up to participate in this unprecedented experience. As of yet, over 25,000 people have signed up to participate, from all over the United States, Israel, England, India, Moscow, Belarus, New Zealand, Warsaw, Krakow, Berlin, Leipzig, Canada, Cologne, Frankfurt, Vienna, Chili, Mexico City, Honk Kong, and Sydney.

Unadulterated by agendas, politics, or fundraising, Jews from all around the globe are volunteering to participate, and there are numerous ways for one to do so (visit www.BlevEchad.com to get involved).

I am deeply inspired by this initiative. The program may be one small step for contemporary Jewry, but it is one giant leap for our eternal Jewish Family.

For more information, or to sign up your school and/or community to participate in this worldwide event, visit:www.BlevEchad.com
Like What You Read?  Give Jews around the world the chance to experience engaging Jewish wisdom with more articles and videos on Aish. It would make your mother so proud and as a nonprofit organization it's your support that keeps us going. Thanks a ton!

The Inner Exile
What Makes Eli Run?
The Tyranny of Materialism
Science Enters the Mysterious Inner World of Consciousness
Comments
MOST POPULAR IN Israel
Our privacy policy