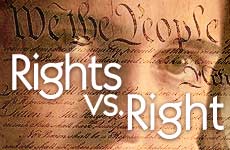 Why can't I affirm the assertion of others that traditional Judaism looks down at women?

Contemporary American Jewish women are standing up for their rights, demanding equality in Judaism. I have heard my sisters' passionate words of protest and have tried to understand their complaints, to share their anger. But I cannot.

Why am I not insulted that Jewish religious law, or halacha, does not count me as part of a prayer-quorum, the minyan - or allow me to be publicly called to the Torah for an aliyah? Why can't I affirm their assertion that traditional Judaism looks down at women?

With my Ivy League undergraduate education and law degree, I am as bright as they are.

With my Ivy League undergraduate education and law degree, I am fairly certain I am as bright as they are. Why have I chosen to become an observant woman, and experienced sheer joy in the journey? Why aren't I bothered by what bothers so many others? The answer lies in a realization that, despite its essential simplicity, is apparently very difficult for many American Jewish women to even consider.

We American women have been raised on the banner cry of equal rights. We have, and rightfully, insisted on equality in the workplace, on the campus, in athletic competition and in the financial world. And we have achieved much success.

At the core of our demands lies the ideal of democracy. The legal, social and political underpinning of American society, the U.S. Constitution, guarantees the right to equality under the law and the right of redress in a judicial system. Nurtured on this tradition, the modern American Jewish woman tends to absorb the notion of equality within the American democratic paradigm.

U.S. CONSTITUTION VS. THE TORAH

The legal underpinning of the Jewish people, however, is not the U.S. Constitution but the Torah, a God-given code of law that does not speak in terms of rights, either for men or for women. It bestows no rights at all, only commandments, or mitzvot. And unlike the Constitution, the Torah -- and the legal corpus that derives from it, halacha, or Jewish religious law -- cannot be amended, even by a legislature's majority vote. The Torah does provide mechanisms for interpretation (by scholars whose sole goal is determining the texts' intent) but not for interpretation, much less change, born of human notions or desires.

"You shall not add to the word that I command you, nor shall you subtract from it."(Deut 4:2).

The crux of the modern American Jewish woman's discomfort with her Jewish religious heritage is, I suspect, her inability, or refusal, to distinguish between what democracy calls "rights" and what the Torah calls "right."

The crux is the refusal to distinguish between what democracy calls "rights" and what Torah calls "right."

Sadly, that reluctance to leave the paradigm of entitlements for that of obligations prevents so many precious Jewish women from even seeing, much less embracing, the beauty of the Jewish religious tradition.

Ironically, it also prevents them from discovering their true power as women, as commanded beings, whatever their particular commandments. Because being a halacha - observant Jewish woman is so much more, not less, than being part of a minyan; more, not less, than donning a tallit or tefillin.

If a woman feels she is equal to a man only through the donning of a religious object or the execution of a public synagogue-role -- if that is the sum of her religious expression -- then she is indeed missing out on something very important. Not men's commandments, though, but her own.

It is easy to imagine how, for a woman who was denied the opportunity to play little league when her brother donned his uniform, old feelings of exclusion and "unfairness" may be touched off once again when she is told that she is not part of a minyan, or that certain mitzvot are not incumbent on her. What has really occurred, however, is a sort of conceptual short circuit; the "equal rights" mindset has crossed wires with the "divine obligation" reality.

True equality -- equality of worth -- is not measured by equivalent religious roles.

Fairness and equality, in their everyday senses, in their proper context, are wonderful; but holiness and Torah occupy an entirely different universe. True equality -- equality of worth -- is not measured by equivalent religious roles. If a Jewish woman is really sincere about being the best she can be, if she seeks strength, dignity, self-esteem, and true, lasting happiness, it is not a tallit or tefillin that she needs, but courage.

Courage to recognize that the American definition of equality cannot be used to change the Torah. Courage to learn, with pure honest and objectivity, about her remarkable Jewish heritage, courage to shoulder the obligations and role it bequeaths her, courage to know that her greatest potential imaginable lies in being a Torah woman.

And so, to all my Jewish sisters, from the bottom of my heart: I wish you abundant courage.

Elaine M. Viders, Esq., is an adjunct Professor of Law at Touro Law School. Courtesy of Am Echad Resources.

Jewish Women in the Footsteps of Wonder Woman

Becoming a Mother Changed How I View My Body

Out of Iran, Finding My Voice

A House of Hopes

How a Jewish Mother Smashed the Glass Ceiling at a Prestigious Wall Street Law Firm
It Takes A Lot Of Faith To Be An Atheist
How Instagram Brought Back This Nostalgic Soup
What Makes Eli Run?
Comments
MOST POPULAR IN Current Issues
Our privacy policy