Yes, I Wrote for Seinfeld 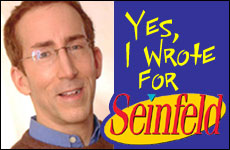 Writing for the hit television show Seinfeld was in many ways a very Jewish experience.

Seinfeld was probably the most Jewish sitcom of all (except for The Goldbergs) at least in subtext. Many, not all, of the Seinfeld writers were Jewish, including yours truly. The crux of the show involved one of our specialties, suffering, which I first encountered when suffering the indignities of junior high, when the line of defense that helped win over my enemies was humor. My later comedy role models included such sufferers as Woody Allen, Albert Brooks and even Judd Hirsch on Taxi.

The crux of the show involved one of the Jewish people's specialties – suffering.

Some shows had a Jewish feel to them, even if the family wasn't Jewish, as in Everybody Loves Raymond. And let's not forget that George on Seinfeld had an Italian name, but the Costanzas were as Jewish as they come. Though far less than the proverbial nurturing type who "kvell" over their children's accomplishments (which a lot of Jewish parents don't do, despite the cliché) George's folks knew the fine art of suffering when it comes to inducing guilt.

My grandmother used to guilt-trip me into finishing food by lamenting, "Otherwise, I'll just have to throw it out." Why clog the garbage disposal when she could clog my arteries? She also used to make me finish my "steak juice." Yes, under her tutelage, I'd wash down the bloody carcass of a dead cow with a tiny glass of simmering steak juice. If she made me ingest such a thing today, they'd nab her for attempted murder.

Although somewhat less noteworthy than a "kvell," Gammy used to periodically compliment me with: "He eats well." That was usually when the food was cooked by her, not my other grandmother. It could have been a left-handed compliment directed at her own culinary skills. Gammy's kanadles were hard, Mom-mom's were soft. Gammy's borscht was sweet. Mom-mom's sour. My tastes were firmly in Gammy's camp, but if I occasionally switched allegiance, I might as well have been Joe Lieberman stumping for John McCain.

Another instinct that helped me on Seinfeld was the fact we Jews tend to be skilled at inspecting our lives for flaws. We're never satisfied. We strive for a perfection that never comes, and drive ourselves nuts in the process. My grandmother drove my mother nuts. My mother drove me nuts. So in a way, I'm genetically programmed to drive my kids nuts. But since kids will be entering my life when the polar icecaps re-freeze over, it looks like the Cowan model is being discontinued. Maybe the Manufacturer upstairs took all of eternity to finally figure out this model has a glitch. I'm like a Plymouth. Nice while it lasted, but no future models. I'm the Cowan finale! Finales are supposed to be special. The Cheers finale was special. The Mash finale was special. My luck, I'm the Joey finale. My ancestors fought millions of years, wars, famine and pestilence... to get to me? That's too much pressure.

So what are my non-finale-worthy flaws? I don't always recycle. I rush into the garage elevator before the guy just pulling in has time to get out of the car, so I can ride up alone without an awkward conversation. I always vote the way the directors recommend on my dwindling stock prospectus, because I'm too lazy to read the details. I once declined volunteering to pick up cigarette butts off the beach at nine in the morning on a Sunday. I avoid the sun and the beach for pleasure. (The Jews wandered the desert for 40 years, and I can't spend 40 minutes wandering the beach.) I'm gonna show up there nine in the morning for work? I'm not that good!

The Jews wandered the desert for 40 years, and I can't spend 40 minutes wandering the beach.

We Jews not only question ourselves. We question our Creator. For example, why does He reject the Oscar losers' prayers? Did Mickey Rourke fail to take one home because he might have once said "God bless you" after an untalented actor (whom God, consequently, hadn't really blessed) sneezed?

Long after Seinfeld, whenever I appear to be suffering another indignity, I think... that's a Seinfeld. Speaking of the Oscars, this less than stellar evening once happened to me: I was eagerly anticipating the initial hosting stint of Steve Martin, another comedy hero of mine. I'd been to Oscar parties before, but could never concentrate on the show. This time I was home with a pizza in the oven and the TV on. Life was good. And then, seconds before the opening fanfare – the electricity went out. Was it my apartment? Was it my building? I gazed out the window and noticed traffic lights out too. With no other friends home, and no desire to waste time combing the streets for a public arena that had a working TV, I wound up calling my parents three thousand miles away, so they could hold their phone to their TV. As I strained to hear the tinny Oscars on my speaker phone, munching on cold pizza in my darkening apartment, I caught my folks' comments more clearly than Steve's.

The best supporting role that year? My folks. Awww. How's that for a non-Seinfeld finale?

Egyptians use Stimulus Package to Build New Pyramids
For Every Individual, A Torah Scroll
Allegiance To The Monarch
Meet the Real You: Yom Kippur
Comments
MOST POPULAR IN Jewlarious
Our privacy policy
Aish.com Is Looking for Great Writers