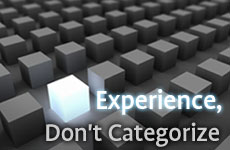 Getting past the superficial and experiencing another person.

Oprah recently featured a group of teachers and students from an interracial public school who had participated in a program called Challenge. The course gets people past their superficial and prejudiced ways of relating to see others for who they truly are.

The participants were filmed in their school gym. "Anyone who has ever felt insulted because of their race, please cross the line," the facilitator instructed. Several black students crossed the line. White students looked at each other in surprise -- and then shame.

"Anyone who has ever felt put down by a teacher, please cross the line." Several more students crossed the line -- and teachers looked shocked and upset.

Kids were invited to describe how it felt to be hurt. Slowly and painfully, participants became aware of how their unkind or thoughtless words and actions had affected the people they interacted with every day. By the end, kids and teachers were coming up to the microphone to apologize publicly for causing others pain. One boy who had been calling girls unpleasant names said he now knows that every girl is beautiful in her own way. Black and white kids embraced. Many cried. After showing the film, Oprah interviewed some of the participants. It was clear that as a result of the program, not only were wounds healed, but genuine bonds had developed. Students had acquired greater sensitivity, viewing each other with newfound appreciation and respect. They had learned to see each other as more deeply human.

"When you meet a new person, instead of judging and categorizing them, take them in as they are."

The program made me think back on something I had heard a few days earlier. My hostess had told me about a rabbi who had spoken in a nearby synagogue, and whose words had left a strong impression on the community. "When you meet a new person," he told his audience, "instead of judging and categorizing them, take them in as they are." "Don't conceptualize," the rabbi said. "Experience."

This is what the kids and teachers who had participated in Challenge had learned -- to get past conceptual barriers and genuinely experience each other.

Most of us are guilty of relating to people somewhat superficially. Perhaps out of an emotional need to simplify a complex world, we sometimes size up others quickly and shallowly. The result may not be calling them names or putting them down, but simply assuming that we've "got their number."

Instead of experiencing, we conceptualize.

I suspect this is particularly true in dating -- and it undoubtedly gets worse with dating burn-out. Upon meeting someone new, we may quickly decide we know enough about them to know they're not for us. We mentally sum them up and dismiss them before ever really seeing into them.

This past year, I was invited to speak at a large social-religious gathering of 20- and 30-something singles. It was a great event, with lots of good food and camaraderie. And naturally, during and in between, everyone was discreetly looking around, hoping to find someone who interested them.

I, too, looked around, grateful to be happily married and feeling for these individuals who were undoubtedly yearning to find the "right one." I wondered what it would be like to be a young single at an event like this. Would I be hopeful or pessimistic?

I wasn't sure. On the one hand, I had good reason to believe that all the participants were nice people. On the other hand, while some were quite handsome or pretty, many were ordinary-looking; while some had a highly attractive air about them, many were more understated. Would I, like many singles, gravitate only toward the former? And upon realizing that, for whatever reason, I wasn't going to get the chance to date any of those "highly desirable" individuals, would I simply write off the others and conclude that the event was a depressing waste of time?

Or would it be possible to look at the rest of the participants in another way?

I decided to try an experiment. If someone wanted to talk to me after my lecture, I would try to go beyond that superficial impression we all get of people. I would try to see him or her in a more real way, as he or she truly is. To put it in the rabbi's terms, I would experience, not conceptualize.

I put myself into a different headspace, and waited.

Indeed, several people came over to speak with me. All asked intelligent, sensitive questions. At the same time, none of them had the looks or charisma of a Hollywood celebrity. One even had a serious degenerative illness.

Yet the experiment left me stunned -- and in awe. Every one of these individuals, without exception, came through loud and strong as a beautiful human being. Suddenly the room seemed full of unbelievably eligible singles.

Much has been written and spoken about the dating crisis -- that so many wonderful singles just don't seem to be able to find the "right one." There are undoubtedly a host of reasons for this, many of which have to do with societal problems rather than individual shortcomings. My intention here is certainly not to point a finger at those who may already have come under attack for being "too picky."

At the same time, I can't help but wonder: Could any of our difficulties be because we simply don't see people deeply? Because we conceptualize rather than experience?

The next time you're on a date or at a singles' event, try the experiment. Drop your preconceptions. Open your mind and heart, and let the other person in. The emerging picture may be a lot more attractive than you expect.

4 Ways to Create a Strong Relationship

6 Keys to a Great First Date

How Do I Know if I’m Ready for Marriage?

Avoid These Common Dating Mistakes to Create a Marriage that Lasts

Should I Break Up, Get Engaged or Keep Dating?
Scientific Curiosity and the Divine Encounter
Mind Over Milkshakes
Love the Convert
Comments
MOST POPULAR IN Dating
Our privacy policy
Aish.com Is Looking for Great Writers