The Jewish Ethicist: Failing the Grade 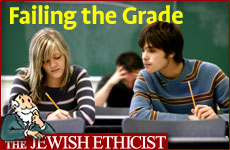 Cheating on tests a failure for both student and society.

Q. Many people in my school cheat on standardized tests. Can I do the same?

A. One of the most dismaying ethical lapses I perceive is the problem of cheating in institutions of learning. It is impossible to compel people to act ethically, but the least we can do is educate them to do so. Instead, young people are obtaining an education in deceit in their teens and early twenties. Recent news reports complement earlier studies as well as my own experience in academia in confirming that cheating and copying are a serious problem here in Israel and in many other places in the world. While I wish I could say otherwise, the studies and my experience also confirm that the phenomenon in no way passes over students with a religious background.

An unusually comprehensive and insightful discussion of this problem was penned by the great recent rabbinical authority from New York, Rabbi Moshe Feinstein. Someone asked his opinion about reports of cheating by yeshiva students on Regents exams. Rav Moshe refused to give credence to the report, but at the same time made a strong statement forbidding cheating on tests. Here is an excerpt from his letter:

This is forbidden not only by the law, but also by the Torah. And this is not only misleading, which is in itself forbidden as [the Talmudic sage] Shmuel states . . . that it is forbidden to mislead [any other person], so much the more here that he misleads everybody. It is actual stealing, for when he wants later on to get a job, work in a trade to make a living, in most cases [the employer] wants someone who excelled in his studies. And they will see his test results that he has a good score, and on that [false] basis he will be taken on, and this is actual stealing.

And don't claim that even if that is the basis for his being hired, this is really an irrelevant basis and therefore it's permissible to lie. First of all, even if there is no real basis for insisting on [good grades], this employer at any rate insists on it and so his hiring is null and void; and in any case it is always forbidden to lie even if there is no [unfair] advantage gained. . . Furthermore, if [the employer] knew he had lied he wouldn't rely on him for anything, and he will [unfairly] cause others to be suspect. . . Furthermore, when people insist on this there is certainly a valid basis, for there are certainly things that someone expert in his studies will do better in business and commerce. . . This also develops habits of not knowing what is studied and habituates to laziness. (1)

Rabbi Feinstein mentions a number of reasons cheating is improper:

You may feel that you are reluctant to cheat but have no choice due to the dishonest conduct of others. While in general we shouldn't rush to report wrongdoing by others, if cheating in your school is so widespread that it is meaningfully skewing the academic record, it is proper for you to turn in wrongdoers, and this is certainly better than cheating yourself.

The Jewish Ethicist: Getting Recognition

The Jewish Ethicist: Career Versus Careerism
Why Are The Prayers Of Yom Kipur So Repetetive?
Ha'azinu 5783: A Time for Unity!
Twisted Thinking
Comments